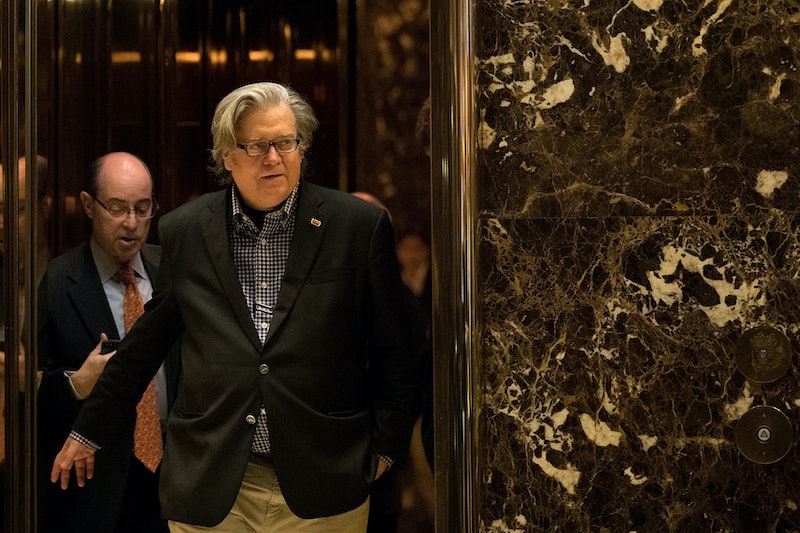 Until pretty recently, you might not have heard the term "alt-right," which is used to cozily refer to a specific brand of conservative extremism characterized by extreme racism along with with misogyny, anti-immigrant sentiment, antisemitism, Islamophobia, homophobia, transphobia, and a number of other varieties of hatred. At the core of the movement is the belief that we are living in a world in which political correctness gone mad is threatening the survival of important values, like "white is right." It's white, it's online, it's male, it's angry, it's bigoted, and it's fed by idealized visions of "Western civilization" (that's a dog whistle for "a world without people of color," just so we're clear). And it owes its rise to sites like Breitbart, a notoriously bigoted right-wing news site with an editorial vision heavily shaped by Steven Bannon, who was tapped to work on the Donald Trump presidential campaign and is now being ushered into the impending administration.

This ideology has been around in this form under the "alternative right" banner for at least a decade, and now it's hit the mainstream. In the wake of the election, the uptick in hate crimes reported to groups like the Southern Poverty Law Center and the sudden appearance of "alt-right" heroes in the halls of government makes it imperative to talk about why we need to stop using a quaint euphemism like "alt-right" to refer to the resurgent white nationalist movement in America.

This term, "alt-right"? It's got to go before it gets any more legitimate, and the window on that is rapidly closing. Just this morning, the Oxford English Dictionary blog delved into the origins of the term (click through if you love hearing stuffy people at the OED talk about "cuckservatives"), quoting white nationalist Richard Spencer's "we're the establishment now" comment, made in the wake of the election. Even Glenn Beck admits that the rise of this particular flavor of conservatism is a problem.

When you are literally in the White House, you are no longer "alternative." You've gone mainstream, and the country that normalized you let it happen.

It is extremely important that we refer to people who share this cluster of political beliefs accurately, and that we do not allow them to define themselves. "Alt-right" is their word, popularized by people like Richard Spencer, a leader in the movement, and Bannon — who, it bears noting, is a white nationalist — and we do not need to use their word. We should in fact pointedly not use it, because we should not normalize, legitimize, or popularize their hate movement. We should call them what they are: white nationalists, or racists.

In the week since the election, we've had a lot of conversations about normalization, and how easy it is for a country to slip into accepting things that it said were unconscionable just weeks before. It starts small, with little things that build upon each other, and suddenly you're in the middle of a post-apocalyptic wasteland, wondering if you've accidentally woken up inside a YA novel. Bannon's appointment was a classic example, as the man who spearheaded Breitbart News, a cesspool of filth and hate, was referred to with gentle terms like "controversial" by the media, which seemed reluctant to name him as a white nationalist. "Is he as bad as all that?" asks The Washington Post, which is apparently a fan of rhetorical headlines these days.

Commentator Joshua Foust helpfully provided a list of examples illustrating how not normal all of this is. A presidential campaign rooted in vicious hatred managed to take the White House, and in the days following the election, we've seen utter disarray, nepotism, and terrifying signs for the future of U.S. domestic and foreign policy. Many of the people advising the president-elect consider themselves part of the "alt-right," as anti-establishment outsiders speaking truth to power. When you are literally in the White House, you are no longer "alternative." You've gone mainstream, and the country that normalized you let it happen.

Like The Term "Pro-Life," Calling It "Alt-Right" Lets Them Control The Messaging

The right is very, very good at weaponizing language for propaganda purposes, developing watchwords and branding that have tremendous impact. "Pro-life" is something that evolved from the right as a brilliant answer to the push for abortion access. "Alt-right" is another example, a term developed by this segment of the right to define itself, but also to legitimize itself. The term speaks to trends in American conservative thought surrounding the desire to break free from what some see as unnecessary strictures and compromises of the right — the Tea Party being another example.

"Alt-right" sounds like something bold and daring — people taking a stance against the failures of the Republican party. It also conceals a lot. People ascribing to their ideology are racists. They are white supremacists. They are white nationalists. A big part of their ideology is the notion that people of color are inferior to white people, which was one way they got the attention of Twitter, with the endless harassment of Leslie Jones for daring to be a successful, unapologetic Black woman. When you use a nice, neutral term that the movement developed to describe itself, you erase the realities behind it and you prop it up.

To Fight Bigotry, We Must First Be Able To Name Bigotry

If you noticed that Twitter seems a little less troll-infested lately, it's not just your imagination. After rolling out new measures to combat abuse on Tuesday, the service took the step of banning some notorious frequent offenders from the white nationalist camp. "A great purge?" The Washington Post asked, using the term "alt-right" while referring to the banning of Richard Spencer, Paul Town, Pax Dickinson, and a number of other white nationalist figures and publications. Now, prominent members of the movement are screaming about "execution squads" and claiming that Twitter is trying to exterminate their community.

But a recent George Washington University study found that while Twitter was pretty good about cracking down on Daesh, it had allowed white nationalism to flourish, reflecting the backlash of rage from the right about the fact that the United States has a Black president and has been making small gains on civil rights for people of color. America got a rude awakening last week about the strength of the white nationalist movement, and Twitter is scrambling to catch up.

When we let a hate movement define itself, especially through soft, nice, neutral terms like "alt-right," we give them the power, and we allow them to popularize themselves and reach out more effectively. If we simply label white nationalists as what they are, it's not going to stop the movement in its tracks, but it will stop the sugarcoating that makes it easy to sign up. To fight bigotry, we must first be able to name bigotry, and it's time for people to admit that there's nothing "alt" about the "alt-right." It's the same white nationalist movement that has bubbled in this country for centuries, and now, it's taken over the White House.

Let's call these people and their ideology what they are: white nationalists.