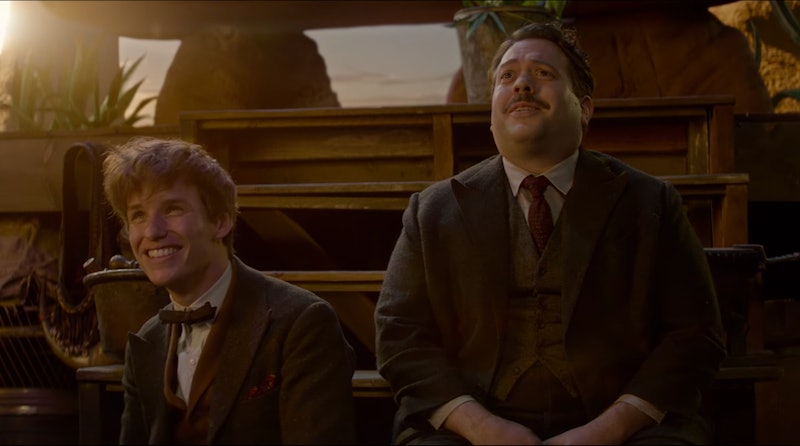 Fantastic Beasts and Where to Find Them will not be a standalone movie. J.K. Rowling has already announced that she is planning on writing five Fantastic Beasts films, including this first one, which means we still have four more to go. Naturally, fans are wondering how — and, more importantly, when — the series will end, especially considering our new protagonist Newt Scamander, doesn't die before the Harry Potter series begins. But, before we get ahead of ourselves and try to predict the entire series of films, let's start with what Fantastic Beasts 2 could be about.

There hasn't been a ton of concrete information on what the sequel to Fantastic Beasts and Where to Find Them could be about. However, director David Yates and screenwriter Rowling have released a few key details. For example, we know that the second film will not be taking place in New York, but in Paris, France — yet another unexplored corner of the Wizarding World. Furthermore, according to an interview Yates gave with /Film, the sequel will take place "a year or two" after Fantastic Beasts. It's unclear how, exactly, the sequel will be related to the original film. It's assumed that Newt Scamander will remain the protagonist, but nearly every other main character in Fantastic Beasts is American, making it a very real possibility that they won't be directly involved in future films. (Granted, it's a small chance, but still.) Keeping in mind the end of the first movie — spoilers ahead — here are a few things Fantastic Beasts 2 could be about.

Fantastic Beasts ended with Grindelwald being taken into the custody of the Magical Congress of the USA (MACUSA) after being apprehended by Newt. Based on what we know of Grindelwald, namely that he was defeated in the 1940s by Dumbledore in Europe, we know it's only a matter of time before Grindelwald makes his escape and returns to Europe. And, when he does escape, he certainly would have reason to hold a grudge against Newt. Perhaps Grindelwald follows him to Paris to get his revenge. We know that Grindelwald will play a bigger role in the Fantastic Beasts sequel, so it's likely that he will be less of a looming presence and more of a very real character.

Dumbledore is coming, y'all. We will be meeting a young(ish) Dumbledore in the Fantastic Beasts sequel, and, according to a roundtable interview with Yates and producer David Heyman, via The Leaky Cauldron, Dumbledore will share a few scenes with Newt. It's unclear whether or not we'll get to see a Dumbledore vs. Grindelwald match up in the sequel, but fans are hoping that, at the very least, we get to see a bit of the implied romance between the two wizards. Rowling has confirmed that Dumbledore is, in fact, a gay character, and his close relationship with Grindelwald certainly sounds romantic.

At a press conference for Fantastic Beasts, Rowling revealed that Dumbledore's fraught relationship with Grindelwald will be explored in the course of the next four films. "You will see Dumbledore as a younger man and quite a troubled man," Rowling said via Variety . Of course, the term "younger" is relative when talking about Dumbledore, so this could mean that Dumbledore is still struggling with his old friendship with Grindelwald in the sequel or that we will get to see flashbacks of Dumbledore and Grindelwald's muggle-hating days. Either way, it's clear Dumbledore will be a big character going forward.

3. The Search For Credence

At the end of Fantastic Beasts, it looks like Credence and his giant ball of repressed magic have been killed, but it also looks like a part of him might still be alive. (If we've learned anything from the Harry Potter series, it's that the dead can always make a comeback.) A sequel could find both Newt and a newly freed Grindelwald searching for Credence and tracking him to Paris. In a roundtable interview, via The Leaky Cauldron, Yates confirmed that Credence would play a role going forward, saying, "Credence, we follow Credence further. he becomes quite pivotal actually, Credence is quite crucial."

4. The Goldsteins Come To Europe

Fans of Pottermore know that Tina Goldstein and Newt Scamander end up getting married, so it's likely that we'll at least see Tina in the sequel, if not also her sister Queenie. As an auror, Tina could be sent to help out with the fight against Grindelwald. Or, perhaps, she just visits Newt in the UK and gets caught up in his wild adventures. After all, Fantastic Beasts ended with Newt promising to see Tina again once his book is published, so the sequel could be the perfect opportunity.

How Jacob, the No-Maj Newt befriends while in New York, would feature into European wizard adventures is a mystery, but hopefully Rowling will find a way. A standout character in Fantastic Beasts, Jacob will hopefully be in the sequel. He ended up being obliviated at the end of Fantastic Beasts, but his last minute reunion with Queenie could change all that. If he is, in fact, in a relationship with Queenie when the sequel takes place, he could travel to Europe with her to see his old buddy Newt.

Dan Fogler, who plays Jacob, told /Film that his contract covers "three films with a chance of four," but that's all at the studio's discretion. Personally, I hope his potential future involvement will open the door to explore the anti-miscegenation laws in the American Wizarding World that prohibit marriages between wizards/witches and No-Majs.

We won't know for sure what the Fantastic Beasts and Where to Find Them sequel will be about until it's released on November 16, 2018. Until then, all we can do is enjoy the magic we have.

More like this
Sadly, 'Fantastic Beasts: The Secrets Of Dumbledore' Isn’t Streaming — Yet
By Arya Roshanian
The 'Thor: Love and Thunder' Trailer Finally Shows Christian Bale As Villain Gorr
By Grace Wehniainen
The 'Hocus Pocus' Sequel Finally Has A Release Date & It Makes Total Sense
By Shannon Barbour and Radhika Menon
What Does Doctor Strange’s Third Eye Mean?
By Arya Roshanian
Get Even More From Bustle — Sign Up For The Newsletter