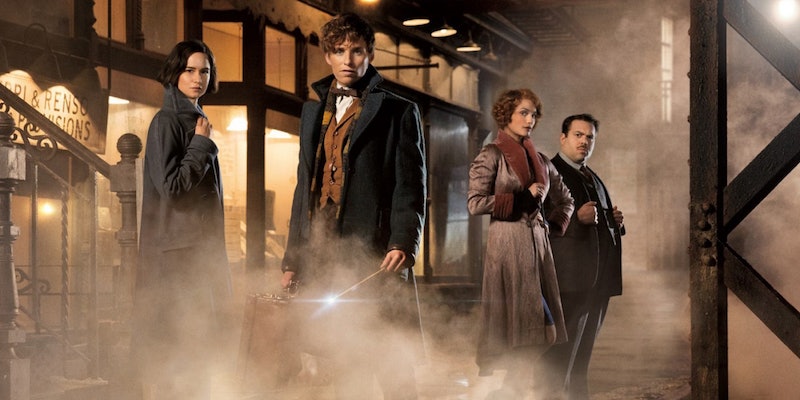 The Harry Potter franchise may technically stem from a series of young adult books, but that hasn't stopped adults from devouring the novels, nor from seeing the movie adaptations. Though the series follows the lives of adolescents, plenty of grown-ups enjoy both the fun elements and seriousness of its themes. But one thing missing from the Harry Potter books and films was a sense of where all that Hogwarts learning was heading — aka, what happened to the characters in adulthood (and no, I'm not talking about Cursed Child). Yet in Fantastic Beasts and Where to Find Them, the main cast is made up of adults who already know their magic, and it's one of the most satisfying things about the film.

The Harry Potter franchise of eight films sees its main three characters, Harry, Hermione, and Ron, grow from inexperienced 11-year-olds to accomplished 17-year-olds. When they start out at Hogwarts, they basically know nothing (well, except for Hermione) and a good amount of time in the films is spent following them in class as they learn the ins and outs of magic. This makes for a lot of fun, but it isn't until the trio gets a bit older when their abilities finally become a key element of the story. But we never get to actually see the trio or their peers use their magic as adults. In Fantastic Beasts , though, the main characters are all adults, and it's quite thrilling to watch a group of Potter-verse characters know what they're doing, not have to think of a spell, and not display any hesitation while in action.

To get an idea of what I'm talking about, think about Professor McGonagall. One of the most exciting scenes in Harry Potter and the Deathly Hallows: Part 2 is when Harry finally returns to Hogwarts and Snape threatens him in front of the entire student body in the Great Hall. McGonagall bursts forth from the crowd and defends Harry, using her magic against Snape. It's absolutely thrilling, mostly because audiences have no idea what McGonagall is truly capable of. She's a talented, wise, professor for sure, but she's also a seriously powerful witch that has decades of experience. There's no telling what kind of crazy powerful magic she can do — or what the other adult wizards and witches can do, either. In fact, the adults using their magic during the Battle of Hogwarts is basically the first time Potter audiences get to really see the adults in action, and it's pretty darn exhilarating to witness.

So getting to watch the grown-ups in Fantastic Beasts who know exactly how to obliviate, petrify, and apparate, without showcasing any hesitation or awkwardness, makes for a big difference from seeing the school-age teens who are relatively still new to the practice of magic in the Potter films. It makes the battles a bit more dangerous and the stakes a little more dire. Fantastic Beasts' adult-dynamic also allows for the skipping of the oh-so-YA teen angst aspects of the original Harry Potter franchise. Sure, there's some romantic tension in Beasts, but it's not the melodramatic, world-is-ending kind that the teens of Hogwarts go through. That kind of angst made for some comical moments, but was always a bit of a distraction from the main plot, in my opinion. It's pretty refreshing, even in a magical, fantasy franchise, to watch adults at the center of the action, and that gives Fantastic Beasts a great way to stick out from the rest of the movies.