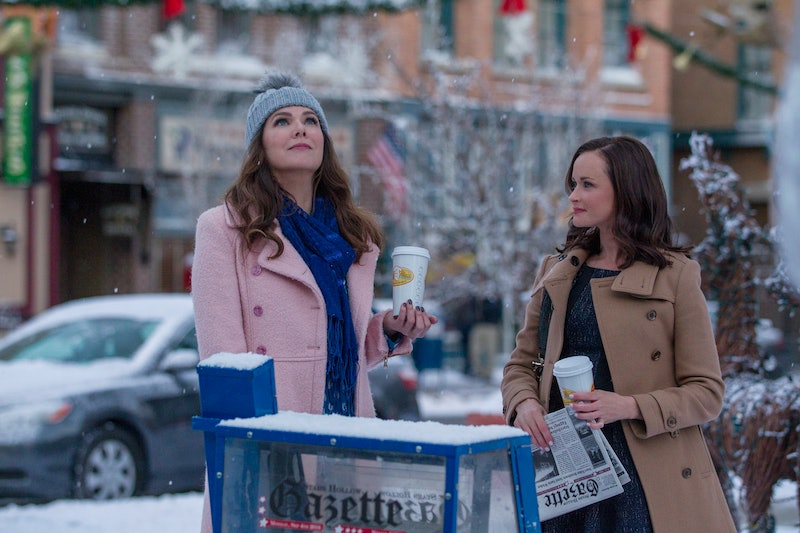 Nine years, six months, and ten days will have passed between the series finale of Gilmore Girls to the debut of Gilmore Girls: A Year In The Life, hitting Netflix in full on November 25. We know that the Gilmore girls’ stories are picking up in 2016, but with nearly a decade since the finale episode's events, there is a lot that we've missed in the Gilmores’ lives. We know Rory has had quite the career, that Luke and Lorelai have stayed together, and that Richard has sadly passed away. But what about everything else? Will Gilmore Girls: A Year In The Life have flashbacks to help build these narratives, or is the audience diving right into Gilmore life in 2016?

Bustle can confirm that there will be at least one flashback in the first episode, "Winter," and that it will be an emotional one. However, the series does not seem to be concerned with frequent flashbacks and will be focusing more on the present in the lives of our favorite Stars Hollow alums.

I haven’t seen the series yet, but it would make a lot of sense for the Winter flashback to take us back to Richard’s death or funeral. After all, the pain over Richard's passing would need to take place in flashback to allow the plot to make sense; Richard’s death occurring during the "present" of the revival would be too painful and limit Rory and Lorelai's ability to have plots about moving forward.

Though the Winter flashback is the only one that is confirmed so far, Lauren Graham also suggested that the revival series will have flashbacks, plural, in an interview with Glamour, but her answer was short and spoiler free. The Q&A went like this, “Will we see flashbacks and clips from the original series?” To which Graham responded, “Uh, probably. Yes, maybe [Laughs].”

While I hope there is proper backstory to kick off the new series after a decade, I also hope there aren’t too many flashback clips. Remember how lame and lazy clip shows were in the ‘90s? Fans are ready to jump in and see where the story leads. We will follow.