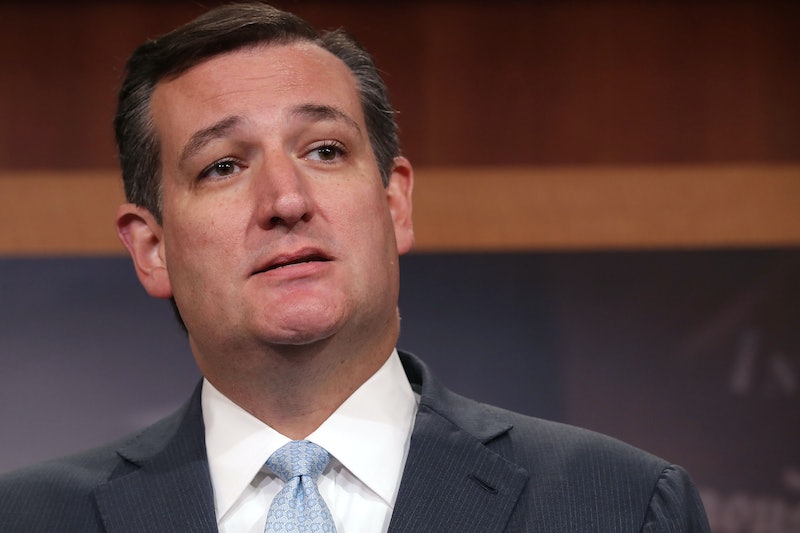 Man, Donald Trump sure knows how to pee on someone and convince him it's raining. After a contentious battle all through the primaries between Trump and Texas Sen. Ted Cruz — which included everything from calling Cruz childish names to bashing his wife — Trump is now in talks to potentially make Cruz the next Attorney General. Apparently, the "vote your conscience" dust-up at the Republican National Convention is water under the bridge, and the Texas senator could join Trump's cabinet.

As MSNBC's Hallie Jackson reported, rumors were flying on Tuesday after Cruz visited president-elect Trump in his apartment in New York. But the Cruz camp insists it was just to congratulate the new leader. Still, speculations are running high, with the press congregating outside of Trump Tower upon hearing the news of Cruz's visit. As Jamie Lovegrove, a reporter for the Dallas Morning News, noted in a tweet from Tuesday, though, Cruz wasn't about to budge about the details of his meeting with the future president. He told the press outside Trump Tower:

I am looking forward to fighting hard, to actually accomplish and deliver the promises we made. I think that it is time for us to turn this economy around, it is time for us to protect the Constitution and Bill of Rights, and I look forward to working very closely with the president-elect, the Vice president-elect to repeal Obamacare and to confirm a strong conservative Supreme Court justice to protect the rights of all Americans.

On Thursday, when asked on Fox News' Fox & Friends about possibly joining Trump's cabinet as Attorney General, Cruz was once again coy, saying just that he and the president-elect has a "far-reaching conversation" and that "I'm eager to work with the new president in whatever capacity I can have the greatest impact defending the principles that I was elected to defend."

The role of Attorney General is a job former New York mayor Rudy Giuliani publicly dismissed, instead reportedly aiming for the Secretary of State position, according to a Trump official speaking to Fox News— a move that will likely put him head-to-head with former U.S. ambassador to the United Nations John Bolton to battle it out for the job.

Trump tweeted on Tuesday in a way that suggested he was confused over whether he's in charge of choosing the next winner of a beauty pageant or the next leaders of America's democracy: "Very organized process taking place as I decide on Cabinet and many other positions. I am the only one who knows who the finalists are!"

As for the "very organized process" part of the tweet (file under: "things you wouldn't have to say if they were true"), that's reportedly unlikely considering that Trump now has to fill 4,000 jobs and has axed New Jersey Gov. Chris Christie, who was intended to be part of the initial transition. Whether Cruz will join a Trump transition to the White House that The New York Times describes as "in disarray" remains to be seen.