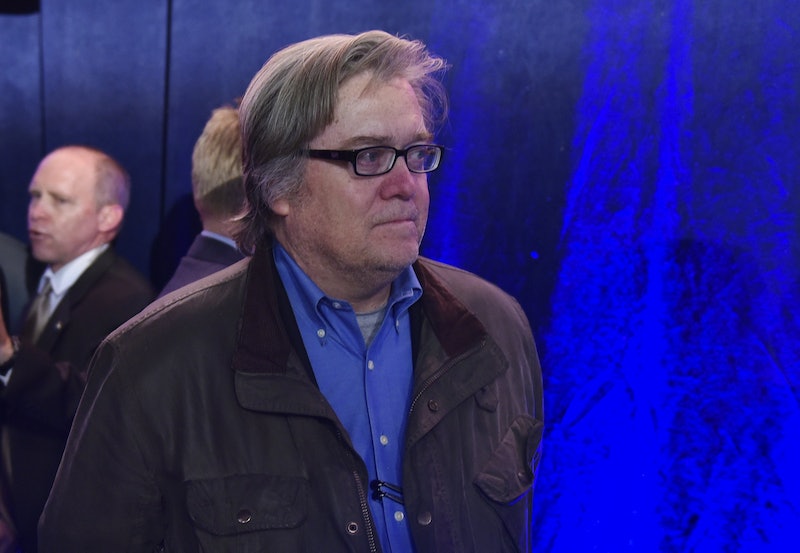 The newest controversy of the budding Donald Trump presidential administration is the appointment of Steve Bannon to the vague role of "chief strategist." The Trump campaign chairman and former head of conservative outlet Breitbart News, Bannon brings a few key benefits to the table for Trump, including his legion of conservative followers and his insider knowledge of the inner workings of the digital media industry. However, one of Bannon's scariest skills is actually his film production history, which spans three decades and over a dozen films, primarily conservative propaganda. These five terrifying films that Bannon has produced are a pretty clear indicator that he's not interested in facts or balanced reporting, which could have some really scary effects when he starts working in the White House.

Bannon, who is listed on IMDb under the name Stephen K. Bannon, has a history of film producing going back to the early 1990s. His first films were actually a little less radical than his more recent work, which has devolved into little more than outright lies and far-right pandering. It's not altogether surprising, considering Bannon's ties to far-right fringe groups and his own documented anti-Semitism, that many of these films have racist undertones, but birds of a feather flock together. Bannon's films indeed may have lain the groundwork for Trump's election, another reason why these five films should scare you.

The trailer is dramatic and compelling, but both the film and the book it's based on have been largely debunked by critics. Media Matters for America called the book "heavily discredited and sloppy." Sadly, that hasn't stopped it from being viewed over three million times on YouTube.

This film is a Citizens United Production, which tells you a little something right off the bat. Some of its "stars" include Ann Coulter, Newt Gingrich, and Lou Dobbs, so that's another little something right there. The film appears to be little more than a racially coded hit piece against President Obama that calls for viewers to "take back our country," so it's not hard to imagine where the racial resentment of the far right came from.

This film "unmasks" the "origin of the Occupy Wall Street movement, which Bannon and his collaborator Andrew Breitbart claim was set up by President Obama to aid in his reelection campaign. (I am 100-percent serious. That's actually what this movie is about.) The Nation's film critic called it "a deranged hodge-podge of bizarre memes, wild dot-connecting, and unadulterated fury."

Another Citizens United production, this film takes the blame for the 2008 financial crisis away from the financial institutions and moves it to the American people. "The current economic crisis is not a failure of capitalism, but a failure of culture," reads the film's description. "Generation Zero explores the cultural roots of the global financial meltdown - beginning with the narcissism of the 1960's, spreading like a virus through the self-indulgent 90's, and exploding across the world in the present economic cataclysm." Whatever you need to tell yourself, Steve.

Another day, another Obama hit piece. The movie, which was conveniently released right before the 2012 election, features people who voted for President Obama in 2008 but had become disillusioned with him by 2012. Although the interviewees' stories are compelling and their stories shouldn't be discounted, the surface-level look at why Obama didn't accomplish everything he promised is disingenuous and misleading.

Maybe these aren't so much films as commercials for racism and plutocracy. You'll have to watch the movies for yourself to find out.

More like this
Gassed Up Promises All Things Action, Risk, & Redemption
By Frances Stewart
'The Capture' Is Finally Back – & S2 Looks Tense AF
By Sophie McEvoy and El Hunt
The Lionesses Are Calling For Equal Access To Football In Schools
By Sophie McEvoy
'Scream’s Courteney Cox Has Broken A Major Horror Record
By Sophie McEvoy
Get Even More From Bustle — Sign Up For The Newsletter