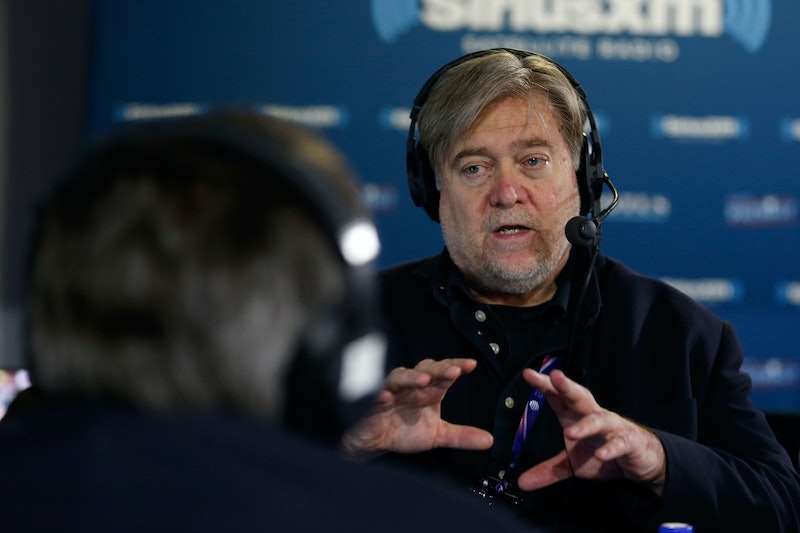 Steve Bannon is now one of the most controversial names in America, right after his boss, Donald Trump. The new president-elect just appointed Bannon to the vague position of chief strategist for his upcoming administration, but Bannon's personal and professional history leave many concerned about what he will do with his professional power. Bannon's most known for his position at Breitbart News, an alt-right news media website, but he had a long career before that is just as questionable. What did Steve Bannon do before Breitbart? His varied career got him to the peak of conservative media.

Bannon served as an officer in the U.S. Navy from 1976 to 1983, first as an engineer and navigator onboard a destroyer before receiving a promotion to special assistant to the Chief of Naval Operations at the Pentagon. After leaving the military, Bannon got his M.B.A. from Harvard and pursued a career in finance in the mergers and acquisitions department at Goldman Sachs. Bannon got his first intro to the entertainment industry there, when he helped negotiate the sale of Castle Rock Entertainment, a film and television production company. In 1990, Bannon started his own media-centric investment bank called Bannon & Co., which put him in connection with some of the biggest names in Hollywood.

From there, Bannon began his ascent to the top of his current field, conservative media. It started with the production of several films including In the Face of Evil: Reagan's War in Word and Dead, praising the Republican hero, and Generation Zero, a film about the 2008 financial crisis that claims it was "not a failure of capitalism, but a failure of culture." His films, which got huge support amongst the far-right conservative base, earned him the name recognition to reach his position as executive chairman of Breitbart News after the death of its founder Andrew Breitbart.

Through it all, Bannon's shown tendencies towards anti-Semitism and stoking racial resentment. Some of his films like Battle for America and Occupy Unmasked are thinly veiled racist criticisms of President Obama, rooted in little fact but proclaimed with tons of passion. His ex-wife filed court documents during their divorce proceedings that alleged some severely anti-Semitic views, and some of the headlines published under his tenure at Breitbart are awful as well. According to NBC News, Bannon's personal spokeswoman denied a claim of an anti-Semitism comment, stating he "never said anything like that."

Bannon rose to the top of conservative media by perpetuating racist and xenophobic views, and even if he isn't either of those things himself, his tolerance for those beliefs should make him an intolerable choice for a high-level White House post.