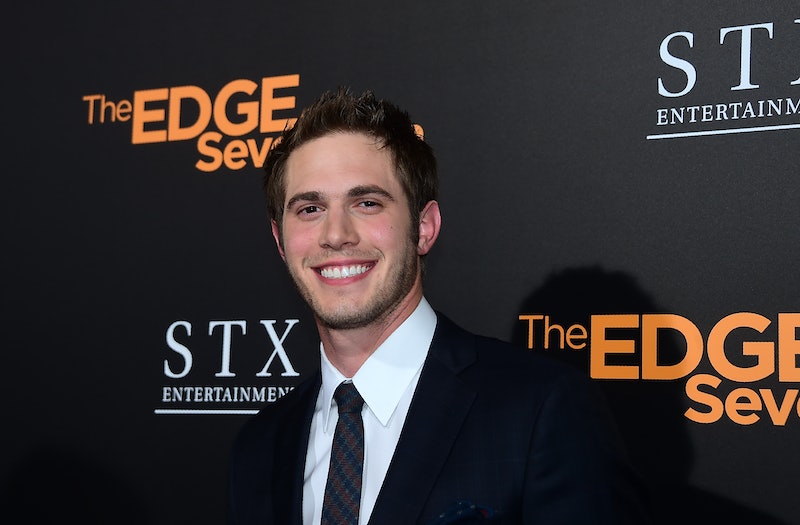 Blake Jenner's character in The Edge of Eventeen is an underrated, modern-day hero. While navigating the craziness of high school and on the brink of college, Darian (Jenner) has more on his plate than perhaps the average movie jock. He wears the caretaker hat for his widowed mom (Kyra Sedgwick) and attempts to keep the peace once he starts dating his adolescent sister's (Hailee Steinfeld) best friend (Haley Lu Richardson), and all goes up in flames. Steinfeld's character Nadine is a neurotic mess, so you can imagine how she takes it. Although he's the youngest of four brothers in real life, Jenner has plenty of experience to draw inspiration from when it comes to so attentively caring for women. Jenner explains why he always got along with women more easily than men, and why he can't wait to have a daughter — even if she's as difficult as Nadine.

It seems the role of the caretaker comes naturally to the actor. He explains how he's "always been the therapist" for his core group of five guy friends from his Miami hometown. "It’s been my mission to be their big brother, I always wanted to be [one]," he says. "[With mine], I was like, ‘I would do it way better than you guys! You guys are being dicks to me!'" And he's always had his mom and more recently a wife, who depend on him, too.

Jenner says his mom calls him and his brothers when in need, and even prior to his 2015 marriage to former Glee co-star Melissa Benoist, his upbringing gave him a profound understanding and appreciation for women. "I grew up with my mom and what I lacked in sisters, I had in aunts," he explains. "My family in Miami is hispanic and the majority of them are women... I love them so much. They’re not shy about emoting at all," says Jenner.

Thus, he has a more natural rapport with women than with men. "I feel like with guys, unless you speak the same language, you got this barrier up, you got this machismo attitude, like who’s better," Jenner says. "It’s like this unsaid thing, you’re just sizing what’s in front of you. Anytime I’ve had a general meeting with a woman, I’m so excited."

Needless to say, he and Steinfeld have a great chemistry and hit it off immediately. "We were brother and sister. There was that respect and that common understanding," he explains. And although he now knows how hot and cold teenage girls can be, he's ready for fatherhood.

"As I get older, I’m just excited to be a dad. I’m not afraid of any of it. I’m kind of stoked," says Jenner. "I always thought two kids would be awesome. A boy first would be the sh*t, ‘cause he could take care of the girl." Even if he does have a girl as troublesome as Nadine, he'll be ready. "I’ve always been the kind of person that just wants to throw myself into experience and learn on my feet... I’m ready whenever it happens and I’ll just tackle it," he says.

Above all, he has compassion for Steinfeld's character, whether he went through the same experiences as a boy or not.

"You gotta be your worse self before you can be your best self. I’ve been such a piece of sh*t at times and I like to think that I’m an alright dude now," he says. "You’re not born perfect, nobody is. You gotta crash before you can fly again."

The 24-year-old is wise beyond his years and his willingness to understand the teenage girl's psyche isn't something you see everyday.

The Edge of 17 premieres November 18th.