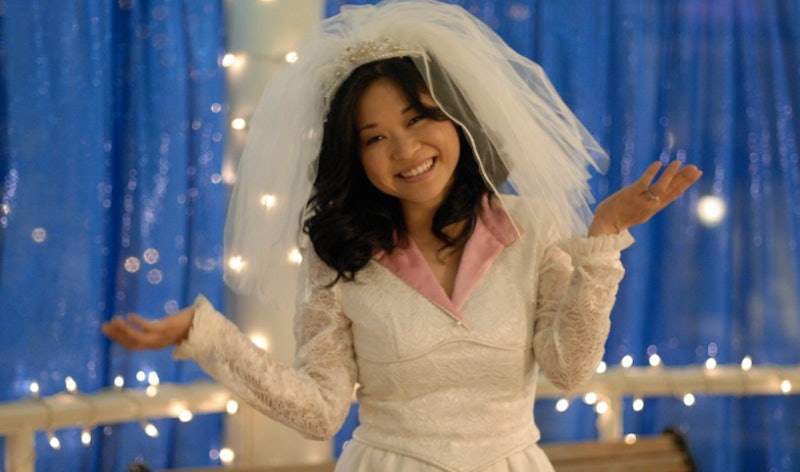 From Hep Alien to the alien resistance? No one can accuse Keiko Agena of getting typecast. Entertainment Weekly reported that Agena has been cast in Colony Season 2 on USA. Agena will star as Betsy, the rare friendly face at Homeland Security. Lane fans beware, though. EW noted Betsy is going to be put in a tough position as the Occupation gets even more intense — fingers crossed she can survive whatever horrors the dystopian world of Colony can dish out.

While Gilmore Girls fans are currently looking forward to seeing Agena reprise her iconic role as Lane Kim in the GG revival, knowing she already found her next gig is wonderful news. After the series ended the first time around, Agena largely left the spotlight, appearing in the occasional guest starring role on shows like Scandal, Shameless, and Grimm. The talented Agena deserves to be front and center all the time. That's why it is going to be so much fun to watch her go from stepping back into Lane's fabulous drummer life to delving deep into a sci-fi world with alien overlords as Betsy.

Both Lane and Betsy sound like affable characters who are eager to help out their friends, but Betsy lives in a world far, far away from Stars Hollow. Seeing what Agena brings to Colony Season 2 is going to be exciting for fans of Gilmore Girls and Colony alike. The show is only going to be cooler for having Agena on board.

For the uninitiated, Colony follows a family whose son was kidnapped when invading extraterrestrials decided to colonize America. The central characters are Will and Katie Bowman, who are played by Lost's Josh Holloway and The Walking Dead's Sarah Wayne Callies. In Season 1, Will was tasked with hunting down members of the resistance in order to protect his family, not knowing that his wife was already a member of the resistance movement.

Colony is in no way similar to Gilmore Girls, unless you count their shared family focus. Still, Gilmore Girls fans should not let that stop them from checking out Colony to see Agena's new role. The show is a dark, sci-fi yarn with lots of political allegories. It's not comforting like Gilmore Girls, but it is a smart show with a superb cast that just got even better with the addition of Agena.

Once you finish watching the Gilmore Girls revival and find yourself jonesing for more of her work, check out Season 2 of Colony on USA. The new season premieres Thursday, Jan. 12 at 10 p.m.