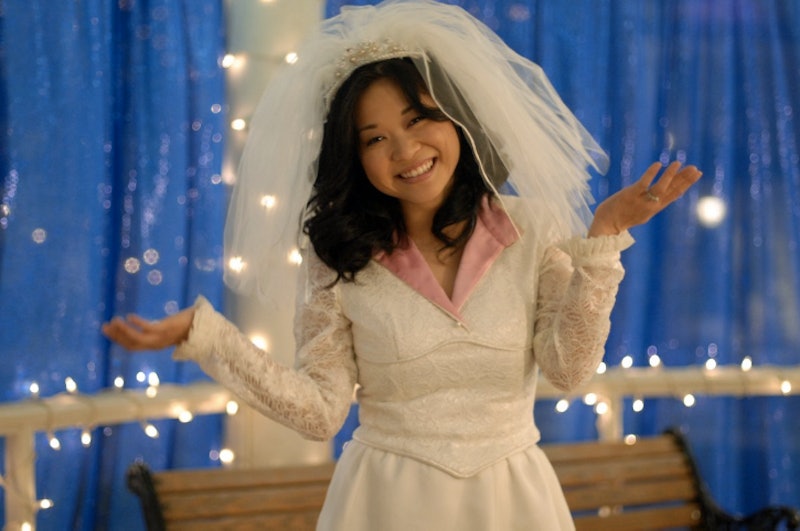 Everyone is all up in arms over Rory's future love interest in the upcoming Gilmore Girls revival. But I propose we stop fighting over Dean, Logan, and Jess for just one second and focus all of our (I hope) mutual hatred on Zack Van Gerbig. Look, I know Lane and Zack are married, and their chances of divorce are pretty much slim to none in the new season. That doesn't mean we should just keep pretending that Lane married the right guy though, right? Zach and Lane are a bad couple, and someone had to be the one to say it. It looks like that someone is going to be me.

Sure, their wedding was cute, and Zack slowly (very, very slowly) became somewhat of a supportive husband after the twins were born. And I can't deny that his luscious locks aren't completely unattractive. (You know, as much as that counts when building any good 'ship.) But between his continuous whining, dumb-­as-­a-­doorknob sensibility (They're twins! Not Siamese twins!), and irrational mood swings, Zack is absolutely the wrong guy for Lane. Here are eight reasons why we'll always be disappointed that Lane didn't end up with someone else. Anyone else.

And that man's name is Dave Rygalski. He was adorable and sweet, and I fully believe that, if he hadn't been whisked away to California, Lane and Dave would've been the endgame couple. Plus, the character of Lane Kim was based on co­-producer Helen Pai, who married the real-­life Dave Rygalski. It was meant to be.

2. Zack Had A Huge Jealous Streak

His jealousy manifested itself when he freaked out after Brian wrote a song for Lane. Not only did Zack unleash a mean temper on everyone, but he also jeopardized the band's career when he ruined their gig, while simultaneously breaking up with Lane. Awful.

3. He Never Apologized For His Temper

Instead of trying to work through his problems, apologize for his jealousy, and attempt to become a better boyfriend, Zack decided to skip over all of that personal growth and propose to Lane. A marriage proposal should never be the next step after a major breakup.

Zack was a total jerk to Rory when she temporarily moved in with him and Lane after leaving her grandparents' house. Instead of making Rory feel welcome, he complained incessantly about how she was sucking up energy, using up all the paper towels, eating all the cereal, et cetera, et cetera. I'm sorry, but you should be treating your girlfriend's best friend with a whole lot more kindness and respect, Mr. Van Gerbig.

5. He Never Made An Effort To Learn About Lane's Culture

When Mrs. Kim invited the band to Lunar New Year dinner, Zack decided to complain about the slimy food instead of trying to embrace Lane's Korean side. He even compared going to her house to going to the dentist, for goodness sake. Even Brian went the extra mile to learn a few Korean phrases, and was genuinely excited to taste Korean delicacies.

6. Lane And Zack Had Zero Chemistry

Remember how Lane and Dave had an instant connection from the moment they met, and their attraction was mutual? The beginning of Lane and Zack's courtship, on the other hand, was stiff and weird. Lane's crush came completely out of the blue, and Zack had to mull for a really long time in order to decide whether he actually reciprocated those feelings or not. And their first date: Sitting on the couch, watching television. Nothing but awkward.

7. Zack Had A Problem With Honesty

Honesty is the crux of every relationship. Zack, however, did not have the greatest track record when it came to being straightforward with Lane. First of all, he lied to her about being in a bluegrass band, forcing Lane to go to the cleaning supply store all by herself. And then, when Lane told him she was pregnant, he pretended he was OK with everything while hiding behind Brian to cover up his fears. Lane was always the one trying to have honest and mature conversations, and Zack was always the one running away and generally acting like a child instead of a partner.

He always questioned Lane's choices instead of respecting and supporting her. When Lane first brought in Gil to the band, Zack didn't even give him a chance before he started to rudely insult him. And when Lane wanted to wear contacts instead of glasses, he couldn't find it in himself to say anything positive about her choice. He was more concerned about the fact that he liked being seen with a "smart chick" than the fact that Lane felt good when she wore contacts.

Despite all of these flaws, Lane and Zack have managed to have a relatively happy marriage, and I'm sure they will be in a good place when see them again in Stars Hollow. But I will always think back to what could have been. Mrs. Lane Rygalski sounds pretty good right now, don't you think?