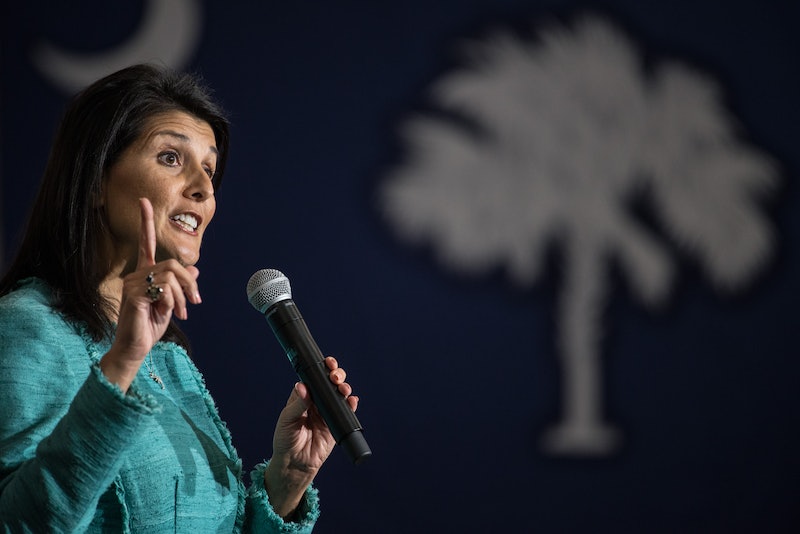 As President-elect Donald Trump continues puts together his Cabinet, reports are emerging that he is strongly considering South Carolina Gov. Nikki Haley as his nominee for Secretary of State, among other Cabinet positions. According to MSNBC anchor Joe Scarborough, sources close to the Trump campaign indicate that Trump decided today to move the focus of his Secretary of State selection in a new direction, which is the impetus behind the shift of focus to Haley.

Prior to Wednesday evening, discussion around Trump's potential nominees for Secretary of State have centered around Rudy Giuliani, former New York mayor, and John Bolton, former U.S. Ambassador to the United Nations. However, according to Scarborough, Trump's decision to seemingly move away from considering Giuliani and Bolton for the post, and toward nominating Hayley, represents a newfound desire to actually incorporate some of his Republican rivals into his administration, perhaps in an effort to diversify the opinions around him.

Haley and Trump's rivalry goes back to campaign season, when Haley initially supported Marco Rubio as the Republican presidential nominee and very actively spoke out against Trump. Indeed, in February, Hayley even publicly stated that Trump constituted "everything a governor doesn't want in a president." For his part, Trump has also previously disparaged Haley on social media following her critiques of him and support for Rubio's nomination.

While Haley did eventually announce her (somewhat reluctant) support for Trump after he became the Republican nominee, Trump's current consideration of Gov. Haley for the Secretary of State position given their less-than-harmonious history is particularly striking. Indeed, the fact that Haley, a former rival, has been very publicly mentioned as the potential nominee likely means that Trump is very serious about taking his administration in a different direction, and also means that there is a very strong chance that Haley will indeed be the Secretary of State nominee. In fact, CNN reports that Trump is already planning to meet with Haley, along with several other individuals under consideration for Cabinet positions, on Thursday morning.

Trump's consideration of Haley for Secretary of State is interesting not only because of her former status as a rival, but also because of her seemingly limited experience with foreign affairs and foreign policy. While Hayley has publicly taken stances on immigration and the Iran nuclear agreement, very little else is known regarding her opinions on U.S. foreign policy. Furthermore, Haley's entire public service career has been domestically-focused, having served in the South Carolina House of Representatives and now in her current position as Governor of South Carolina.

While it remains to be seen whether Haley will actually be nominated for Secretary of State, her upcoming meeting with Trump and serious discussions about her as a nominee certainly reflect that Trump is holding true to his intention to "shake things up" in Washington by potentially nominating a former rival and someone who is very new to the foreign policy space.