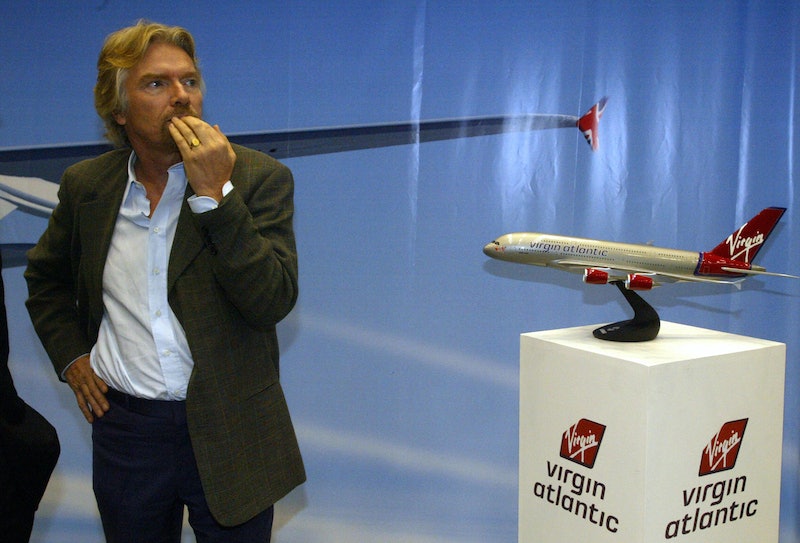 The 2016 election left many stunned, and not just because most pundits and pollsters wrongly predicted that Hillary Clinton would win. Well before Nov. 8, voters were subjected to one of the nastiest campaigns in their nation's history, particularly in Donald Trump's litany of inappropriate and offensive comments about women. Americans weren't the only ones to take note, as big news here (i.e. a presidential election) is often big news everywhere. And British tycoon Richard Branson has decided to punch back at Trump's misogyny by naming one of Virgin Airlines' newest airbuses "Lady Boss."

For those unfamiliar with Branson, he's the eccentric billionaire investor behind the Virgin Group. Branson's entrepreneurial success began several decades ago, with his initial chain of Virgin Megastores. From selling albums, Branson moved on up to the airline industry, founding Virgin Atlantic in the 1980s. He also started Virgin Galactic, an outer space company that wants to "democratize" space travel, but that venture has yet to really take off. Branson (or Sir Branson — he was officially knighted in 2000) is perhaps best known to Americans for his starring role in a commercial promoting Virgin Mobile.

But Branson's latest move to name a Virgin airbus "Lady Boss" comes from a personal place. Penning an article for Virgin's website, he specifically references his daughter, Holly, and imagines how he would feel if she were a teenager right now, trying to navigate the rhetoric of 2016. In delightfully British vernacular, Branson writes, "...my advice would be to tell her: Never mind the bollocks. Do not let others define you. Keep working for what you believe in. And do not give up."

He goes on to acknowledge the challenges women have always faced in the business world. Branson has taken action on that front, too, partnering with Sheryl Sandburg's organization Lean In and the networking site LinkedIn to have Virgin flights offer "free professional development sessions" aimed at encouraging women to keep after their goals.

Though he doesn't mention him by name, these moves by Branson are clearly directed to counteract the pernicious impact of Donald Trump's language and behavior toward women. The two moguls are not friends. In October, Branson went public with his thoughts on Trump, saying on CNN that he did not think the Republican nominee should become president. In describing a lunch the two shared, Branson describes a man fixated on revenge against five individuals who refused to bail him out of bankruptcy. Branson said that it would be "...dangerous to have somebody who's so vindictive in the White House."

American voters decided to take that risk, so they'll get to find out if Branson was correct. In the meantime, it's good to know that there's a "Lady Boss" flying the skies.