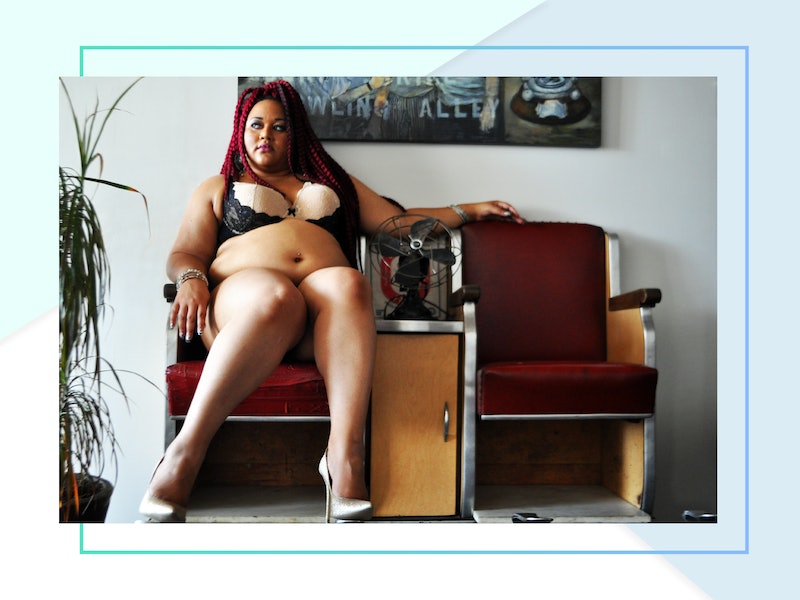 "I remember being the class helper one day in high school," body positive illustrator and artist Jonquel Norwood tells Bustle in an interview. "I was handing in test papers I had collected to the teacher. A girl sitting in the front row asked, very loudly, 'Hey are you pregnant?' [The] class erupts with laughter. I say, 'No, I’m not' (not wanting that rumor around), to which she answers, 'Well, you look like it.'"

It's a scenario a lot of plus size and self-identified fat women have likely encountered: Their subcutaneous midriff fat mistaken for pregnancy chub. Sometimes, the question can feel like a way to detect whether you deserve to get a "pass" for being fat, given that cultivating new life is synonymous with weight gain. Most of the time, it's simply another way folks can make you feel othered for existing in a body that doesn't align with aspirational tropes of beauty.

"I think the worst was when the First Lady of my church placed her hands on my stomach to 'bless the child,'" Norwood remembers. "It's a common question [and] issue for me to this day." It's an issue that's made her relationship with her body, but especially her stomach, quite toxic at times.

As a plus size woman of color, Norwood's tummy hasn't been the only part of her body to be targeted. Her nickname growing up was Biggie Smalls "because I was fat and short," she says. But it was always her core that she felt most conscious of: Her belly outing her true body type to bystanders and peers. "I carry most of my weight in my midriff and for many years it was my shame," she adds. "I was even made to wear girdles as a teen to social functions to hide it," by the allegedly well-meaning adults in her life.

It was the plus size blogging community of cyberspace that helped Norwood take the first steps towards re-framing her perceptions of her stomach. She cites Geek Junky designer Chanique Quinones and Ready To Stare style blogger and designer Alysse Dalessandro, both of whom she met in Atlanta in 2014, as revolutionary forces in her life. "I did my very first photo shoot with Geek Junky at a time when I would normally refuse to be on camera [and] she made me feel beautiful and comfortable with myself," Norwood recalls. "As for Ready To Stare, a few years ago she ran the "I Woke Up Like This' campaign on her blog, where she spoke about loving her body. She pushed me to feel the same and gave me my first crop top. I owe my new happiness to all the plus size fashion bloggers out there who continue to slay."

Combined with a physical move from the South to New York City and the intersection of her artwork with body positivity, Norwood says she began to adopt an "'I don’t give an eff' attribute" that has allowed her to prevent a "piece of flesh" from ruling over her life.

Owning her body has come largely from positive and neutral self-talk. "I had to look at myself and say, 'OK, you have a belly, it’s here and it’s not going anywhere,'" she says. "'So get over it and put on the dress, bikini, [or] crop top. If people stare, who gives a damn?'”

These days, she frequently talks to herself in the mirror as though she's an extra from 1993's Cool Runnings, a film in which four Jamaican men set out to make it to the Olympic bobsledding competition, despite never having seen snow before. "Your confidence will rise and in time you’ll understand that who you are is so much more than a part of your body," Norwood adds.

Of course, going out there in a crop top when you've long condemned your fat belly (or been the subject of others' condemnation for your fat belly) isn't easy. The thought of dealing with harassment or trolling can be enough to set anyone back a few steps. However, Norwood believes there's power to be found in recognizing that feeling good about yourself doesn't happen overnight. Even as improvements and strides are made to get to that place, you still might not feel like Beyoncé onstage every single day.

"No one is 100 percent anything," Norwood says. "We can’t tell people to be 100 percent body positive, because we don’t know A: What that means to them or B: Where they are starting from in their confidence journey." Even though she still finds herself wanting her stomach gone from time to time, the artist says, "I can show it love because it’s a part of my body [...] So if I can find beauty in myself big or small, that is my definition of body positive. I’m on a journey to find true love for myself. It won’t come in a day and it won’t have a body type attached to it."

But this is where pushing yourself out of your comfort zone can come into play. The more you do the things you want to do — the things you once believed were off-limits because of your plus size figure — the more you usually realize that you never really needed to change in the first place.

Shooting in intimates with Substantia Jones, for example, is something Norwood says she "had always wanted to do. I just thought I would lose weight to do it." What she found out when she went for it sans weight loss is that she didn't have to shred a single pound. "We are just so programed to have 'summer and lingerie bodies' that it takes a second to reprocess those thoughts. [But] the thoughts went away the moment I dropped my robe. When you’re in bra and panties with a camera in your face, there’s no time for meekness."

Although Norwood's brand of body positivism isn't necessarily defined by the kind of rampant self-love that consists of feeling like her body is perfect, all of the time, it might consist of something a little more attainable. At least, something more attainable when we're living in a world that still feels the need to define words like beauty or womanhood. Quite simply, she likes to remind herself that only she owns her body. As Norwood likes to say, "It belongs to me, it doesn't define me."

More like this
What’s The Kibbe Body Type Test That’s All Over TikTok?
By Marilyn La Jeunesse
Here's How To Practice Self-Love In Small Ways Every Day
By Mackenzie Sylvester
How Sunnies Face Is Championing Filipino Beauty
By Kristin Corpuz
How This Founder Manifested Ariana Grande As A Brand Ambassador
By Dominique Norman
Get Even More From Bustle — Sign Up For The Newsletter