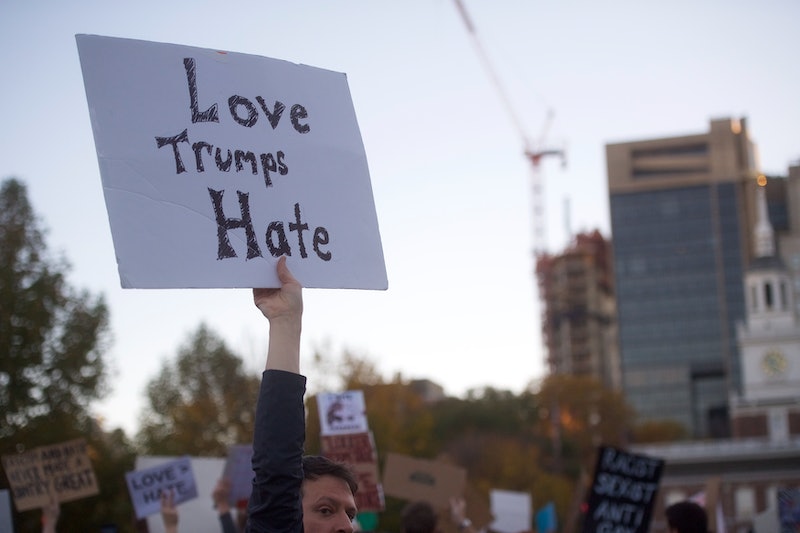 Election night was difficult to process for many Americans, but for one artist, watching Donald Trump win out over Hillary Clinton was especially distressing. Amy Camber's comic about election day initially served as a way for her to deal with her reaction as a survivor of sexual assault; in addition to his history of demeaning comments about women, Trump has been accused by numerous women claiming that he allegedly sexually assaulted them. (He has repeatedly denied all of these allegations, calling them "totally and absolutely false.") "Watching a person who uses misogynist, racist, and xenophobic speech, a person who was accused multiple times of sexual assault, be elected president was intensely painful," Camber tells Bustle over email.

Camber is an artist whose work has appeared online since 2011; she has been published in Seattle Weekly and the Huffington Post. After Trump's election to office, she illustrated her emotions — the pain and uncertainty, the sense of isolation — in a short comic, which she posted on her website. It's highly personal by nature, but she tells Bustle that she hopes the comic speaks to anyone left feeling adrift in the aftermath of the election, no matter the reason.

"I wanted the comic to speak to those sharing my experience, but to also be inclusive of those who are hurting [or] feeling out-to-sea for different reasons," she writes. Furthermore, she adds that sharing it online draws attention to a perspective that may be glossed over during the Trump administration.

Although events came to a head on election night, Camber's comic also depicts her experience during the seemingly endless presidential campaigning. In the months leading up to Nov. 8, Trump repeatedly demonstrated a lack of respect for many groups; for women and people of color, this disrespect was seen in such behavior as promising to ban Muslims from entering the country, calling Clinton a "nasty woman" during the third presidential debate, and bragging in 2005 that he could "do anything" to women thanks to his fame, then dismissing that bragging in 2016 by calling it "locker room talk." Camber says that she had trouble believing that the American people would elect such a man.

"I just couldn't believe that so many people could support a man who campaigned on such a racist, xenophobic platform," she writes. However, she says she understands her shock stems partly from her perspective as a white, heterosexual woman. "This is the reality that people who are systemically marginalized in our country have been calling out for ages," she tells Bustle.

The comic speaks most overtly to sexual assault survivors, but Camber says most women can probably relate on some level. "We live in a culture that objectifies and normalizes violence against women and then makes us feel ashamed of sharing those experiences. Even if you haven’t been raped or molested or abused, if you identify as a woman then you've most likely been demeaned, treated as less-than, spoken to inappropriately, or touched without your consent," she says.

While the shock and disappointment many Americans — especially women and people of color — are feeling after Clinton's loss will take time to process, Camber says there's a silver lining: She feels a "new sense of urgency" to produce politically-minded work. Furthermore, Camber stresses the importance of remembering what we're feeling while the election results are still fresh. She writes, "We will move forward, we will fight. But I don’t want that pain to be forgotten or glossed over. It’s real and it endures."