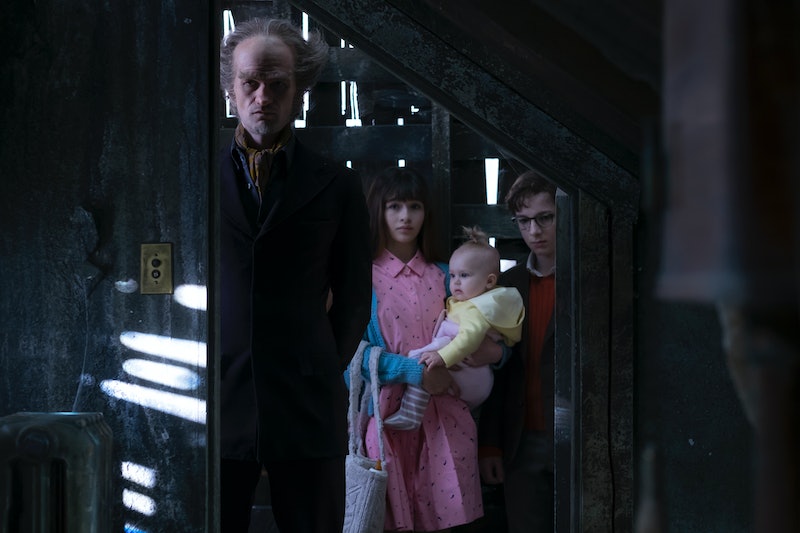 Lemony Snicket's A Series Of Unfortunate Events has already yielded 13 books and one feature film from 2004, starring Jim Carrey as the villainous Count Olaf. Now it will be adapted once again — this time into a television series by Netflix, premiering this coming January. Fans of the franchise have been eagerly awaiting this fresh take on the madcap adventure, and the new Series Of Unfortunate Events trailer has arrived to shed even more light on the upcoming adaptation.

There is a lot to love about the two-and-a-half minutes of footage on display in the new teaser. For one thing, there's the sight of Unfortunate Events star Neil Patrick Harris (taking over for Carrey in the role of the Count) dressed up in a series of ridiculous disguises, each more outlandish than the last — including a sea captain, an Egyptian pharaoh, and a woman dressed head to toe in garish pink. There's also the jazzy soundtrack, the quippy one-liners, and the whimsical production design that brings to mind the late great cult-favorite series Pushing Daisies. (Here's hoping for a cameo from Kristin Chenoweth!) But the thing that's perhaps the most promising about the Unfortunate Events trailer is its inclusivity.

Just a couple of months ago, another family-friendly fantasy adventure raised eyebrows for its lack of diversity: Miss Peregrine's Home For Peculiar Children , in which the titular establishment is supposed to be a safe haven for youngsters with special abilities — and yet featured not a single non-white face among its large rabble of peculiar children. (The film's only notable person of color was the villain, Samuel L. Jackson's Mr. Barron.) It's hard to argue historical accuracy in a film that contains aerokinetic teens and invisible monsters called Hollowgasts; but in an exclusive interview with Bustle, director Tim Burton defended his predominantly white cast of peculiars and said, "Things either call for things, or they don’t."

In light of that news, it's hard not to view the trailer for Unfortunate Events as a rebuttal to Burton's sentiments. Like in the books' illustrations and in the previous film adaptation, the show's main characters — Count Olaf and the Baudelaire siblings Violet, Klaus, and Sunny — are portrayed by white actors. But here they are surrounded by a number of people of color, many of whom are playing roles that were played by white actors in the 2004 film.

There's The Daily Show correspondent Aasif Mandvi as Uncle Monty (played by Billy Connolly in the film); Buffy's K. Todd Freeman as Mr. Poe (played by Timothy Spall in the film); Agents Of S.H.I.E.L.D.'s Usman Ally as the Hook-Handed Man (played by Jamie Harris in the film); and Alfre Woodard, hot off her stint on Netflix's Luke Cage, as Aunt Josephine (played by Meryl Streep in the film). That the main trio's aunt and uncle are both being played — seemingly without commentary — by non-white actors is particularly refreshing and encouraging.

Would it be nice to someday see a fantasy franchise like this that actually stars non-white actors in the lead roles? Absolutely. And will any of these aforementioned characters be game-changers that break the boundaries of what kinds of roles minority actors can play? Probably not. But at least they exist. Inclusivity really is that easy; you just have to actually include people of color in your story. And either you find such a simple task worthwhile, or you don't. I'm glad to see that Netflix and the people behind the series — showrunner Mark Hudis (True Blood), director Barry Sonnenfeld (The Addams Family), and writer Daniel Handler (the real Lemony Snicket) — apparently do.

You can dive headfirst into the beautiful, bizarre, and diverse world of A Series Of Unfortunate Events when all eight episodes are released on Jan. 13, 2017 — and yes, that is Friday the 13th, for those of you keeping track at home. How appropriately unfortunate.

More like this
Kimberly J. Brown & Daniel Kountz Looked Back On Their ‘Halloweentown’ Romance
By Stephanie Topacio Long
All The Sneaky Lindsay Lohan Movie Easter Eggs In Her New Ad, Explained
By Stephanie Topacio Long
Jesse Tyler Ferguson Had A Funny Run-In With A Fellow ‘Modern Family’ Alum
By Grace Wehniainen
“The Door Is Always Open” For Another 'Breaking Bad' Spin-Off, Says AMC Boss
By El Hunt
Get Even More From Bustle — Sign Up For The Newsletter