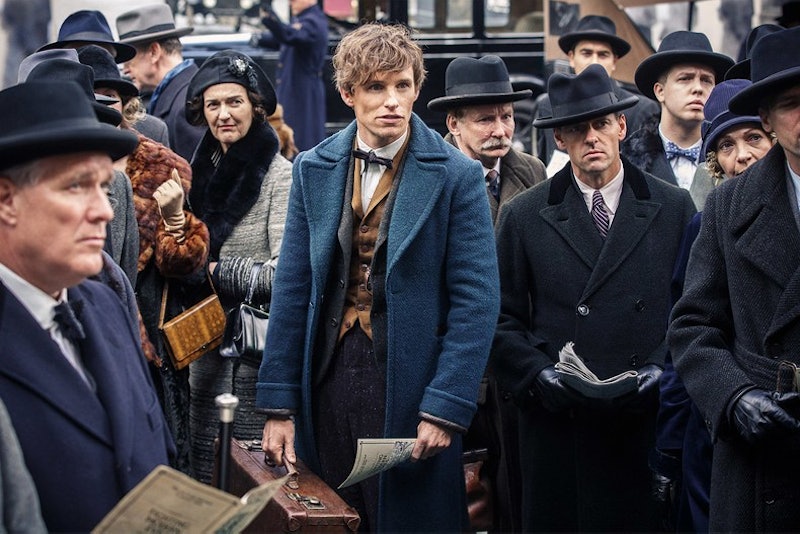 The Harry Potter universe has always seemed a little bit out of time, as its use of magic and fantasy gives it a bit of an other-worldly feel. But the Potter movies have always hit on some pretty poignant themes that touch on modern issues, and while the newest film, Fantastic Beasts and Where to Find Them , might take place in 1926, it still feels incredibly timely. By hitting on some all-too-relevant issues like fear, terrorism, and the rise of demagogues, Fantastic Beasts is probably a little more current than anyone expected.

A good portion of the plot of Fantastic Beasts revolves around the activities of The Magical Congress of the United States of America (M.A.C.U.S.A.). The organization is determined to protect the U.S. wizarding world from exposure, and enforces the Statue of Secrecy, keeping witches and wizards from interacting with everyday humans. Meanwhile, fear and terrorism from the actions of the anarchist wizard Gellert Grindelwald are circulating throughout the world. It's not a subtle message; the environment is clearly very similar to America's own right now, where groups of people are being singled out, attacked, or discriminated against because of what makes them "different."

Many viewers of Fantastic Beasts will have just been through a pretty tumultuous election season, and will be dealing with an outcome isn't what many likely hoped for. For some, it feels like we're heading into an era of xenophobia, fear of the other, and international strife, issues that've existed for years but now, unfortunately, seem stronger than ever. And though Fantastic Beasts has been in the works for quite a while, it seems almost omniscient that the film would be so on the mark in discussing these subjects. As producer David Heyman explains in the press notes for the film, none of the movie's themes were added for the movie, but rather were already present in J.K. Rowling's earlier works.

"Many of the underlying themes of the Potter books are in evidence here: the virtue of tolerance in contrast to the dangers of intolerance and repression; being true to who you are; outsiders coming together and connecting," Heyman says. "There is an emotional universality and relevance to those ideas that are utterly relatable to people across the globe. Whether it's Voldemort or Grindelwald, the notions of intolerance and stigmatizing certain people remains at the hearts of Jo's writing."

Eddie Redmayne, who stars in Beasts as Newt Scamander, touched on the feelings of separation and isolation that many folks are feeling in this post-election world. "A theme at the core of this film is the fear of things we don't understand and also how people react to that fear by taking extremes," he says in the press notes. "It's why wizards are living in hiding in New York and there's absolutely no interaction between them and the Muggles, which is permitted to some degree in the UK, where Newt is from." And the real world, in the wake of the 2016 election, has seen waves of hate crimes spreading throughout the country, and rather than coming together, many people are lashing out in fear of "the other."

But these connections aren't just coincidental feelings. As it turns out, Rowling did it intentionally. As she told The Daily Beast, "If you have read the Potter books, you'll know that this period in history was threatened to become very dystopian, so you're looking at the rise of a very dark force... I conceived of this story a few years ago, and it was partly informed by what I see as a rise of populism around the world." So while Fantastic Beasts is definitely a fun romp back into the world of Harry Potter, it's also hitting on some serious timely themes that affect our lives, not just those in the wizarding world.