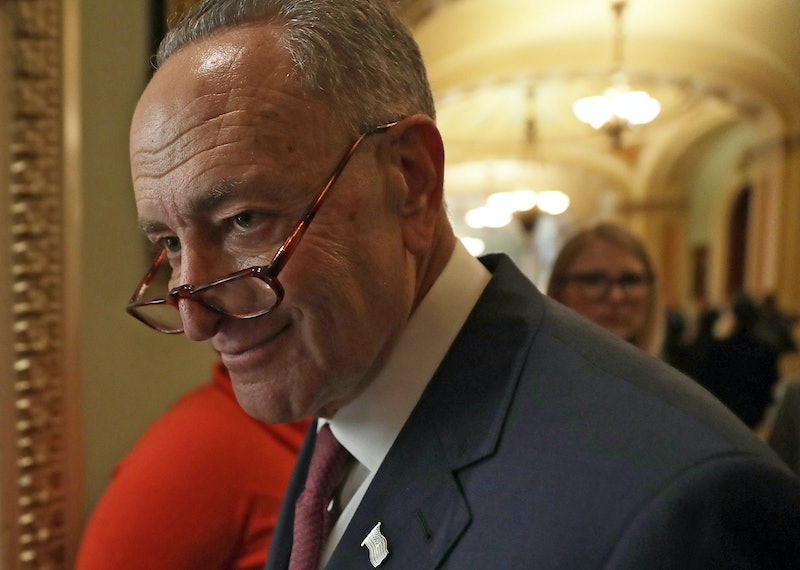 If you were expecting Donald Trump to face lockstep opposition from Democrats once he takes office in January, prepare to be disappointed. The New York Times reports that Congressional Democrats are "looking for ways to work with Mr. Trump" on policies they might agree on, like infrastructure spending and paid maternity leave. Democrats' goal, according to the Times, is to drive a wedge between Trump and the rest of the Republican Party. In the short-term, this strategy may work to sow discord in the GOP and get some liberal policies passed into law. In the long-term, Democrats teaming up with Trump could be absolutely, positively catastrophic to the American left.

When President Obama took office in 2009, Congressional Republicans, by their own admission, embarked on a strategy to oppose Democratic legislation at every turn so that Obama couldn't possibly claim to have passed anything with bipartisan support. Democrats now seem to be taking the opposite strategy, and are looking for ways to help Trump pass legislation. A lot of this will depend on what exactly Trump ends up proposing, but if he pushes for infrastructure spending bill and paid maternity leave, as he's said he will, there will be a lot of area for potential agreement between Trump and the Democrats.

But Democrats will be making an enormous mistake if they help Trump pass legislation like this.

The unexpectedly contentious primary battle between Hillary Clinton and Bernie Sanders made it clear that the left is very, very divided. Clinton represents the moderate, neoliberal version of the Democratic Party that's been around for the last several decades or so, while Sanders champions a much more radical, anti-plutocratic form of liberalism. Clinton won the primary but lost the election; meanwhile, there are scores of Sanders voters who are left without a political home.

The policies that Trump could conceivably work with Democrats on are the exact sort of big government policies that the Sanders wing of the Democratic Party likes, and if Democrats help Trump to pass these policies, it could result in a terrifying new alignment in American politics. The president is the one who receives credit (or blame) for what Congress passes, so if Democrats work with Trump to pass liberal economic policies, Trump will be credited with it. In other words, Trump will have co-opted some of the most popular aspects of the left's policy platform, and subsumed it into his own political philosophy and governing coalition.

This would be troubling because a whole lot of Trump's other policy proposals, and casual remarks he's made here and there, are flatly racist and xenophobic (the Muslim ban, the border wall, the Muslim registry, etc). As a result, we could end up with a situation where the political party (that is, the GOP) that supports domestic spending and infrastructure investments is also the party that supports deporting 11 million undocumented immigrants and killing the families of suspected terrorists. Needless to say, such an outcome would both neuter the Democrats' ability to rally popular support and, even worse, normalize racism by packaging it together with broadly popular economic policies. This is precisely the strategy far-right leaders in Europe have been using in recent years.

Democrats will be in a really tough spot if Trump proposes any liberal legislation: They'll either have to work with him and indirectly empower his racist worldview, or oppose his legislation even though they agree with it. Neither option looks very good; the best middle ground would probably be to support the legislation, but depict it as Trump capitulating to the left, and then denounce Trump's most odious policies in the same breath. "We're glad President Trump has embraced the policies Democrats have been spent decades fighting for, but we continue to oppose his unfair and discriminatory immigration policies in the strongest possible terms." That sort of thing.

Of course, maybe it won't come to this. Maybe Trump will just propose tax cuts for the wealthy, environmental deregulation and restrictions on abortion, like most Republicans. But if he does push any liberal economic policies, Congressional Democrats need to be very, very careful about how they respond. Embracing them too readily could easily wreak havoc on the American left for decades.