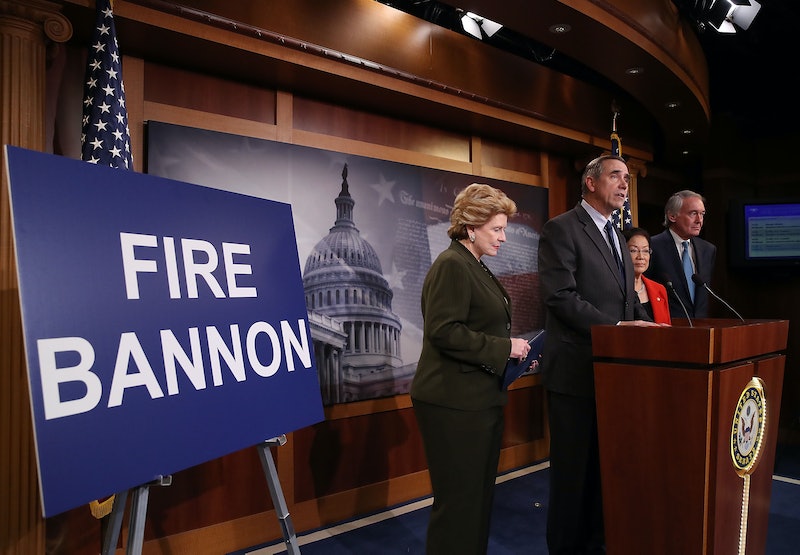 Donald Trump's announcement of Steve Bannon as White House "chief strategist" has been met with enormous backlash. As the former CEO of Breitbart News, Bannon oversaw a media outlet that regularly published blissfully bigoted content. The Southern Poverty Law Center and the Anti-Defamation League immediately called for his dismissal, and they've been joined by a host of Democratic politicians. New York Sen. Kirsten Gillibrand is one of them, and New Yorkers can now call Sen. Gillibrand's office to count themselves among the "concerned citizens" against Steve Bannon.

Bannon is controversial for a number of reasons. Most recently, under Bannon's tenure as CEO of Breitbart News, the conservative political outlet devolved from edgy and right-leaning to intentionally offensive and extreme. Targets for attack included just about any marginalized group, with headlines that smacked of anti-Semitism, homophobia, and gleeful sexism. Bigotry became Breitbart's stock and trade, as the website peddled in outrageous clickbait to serve the increasingly disturbing appetites of its alt-right fan club. Bannon himself trumpeted the growing popularity of Breitbart, calling it the "platform for the alt-right." (Note: the term "alt-right" does not accurately describe its adherents, as most of them are committed to white nationalism, gender inequality, and a "burn it to the ground" mentality towards government. "Fascists" is a better term.)

David Corn of Mother Jones spoke frankly on Bannon, saying, "He is aligned with racists." And any close look at the alt-right leaves no doubt that this is true. Conservative podcast host and blogger Ben Shapiro has said as much himself. Shapiro, a former employee of Brietbart, quit after Bannon refused to recognize that one of his colleagues, Michelle Fields, had been physically assaulted by Trump's then-campaign manager, Corey Lewandowski. (Lewandowski was not brought to trial, nor did he admit any guilt, despite video evidence showing him manhandling Fields). Shapiro says he has no evidence that Bannon is anti-Semitic or racist, but he points out that Bannon is happy to buddy up to those people if it means increasing his personal power. In a rather harrowing passage, Shapiro said, "Bannon is one of the most vicious people in politics, which is why I’ve been joking for months that should Trump win, I’d be expecting my IRS audit any moment. That wasn’t completely a joke. He likes to destroy people."

Given the character of Steve Bannon, thousands of Americans have made their disgust clear. Several petitions calling specifically for the removal of Steve Bannon have gained enormous support. And dozens of Democratic politicians have similarly spoken out, including New York Sen. Kirsten Gillibrand.

If you're a fellow New Yorker who wants to make sure Bannon is removed from the White House, you can make your voice heard by calling Sen. Gillibrand's office.