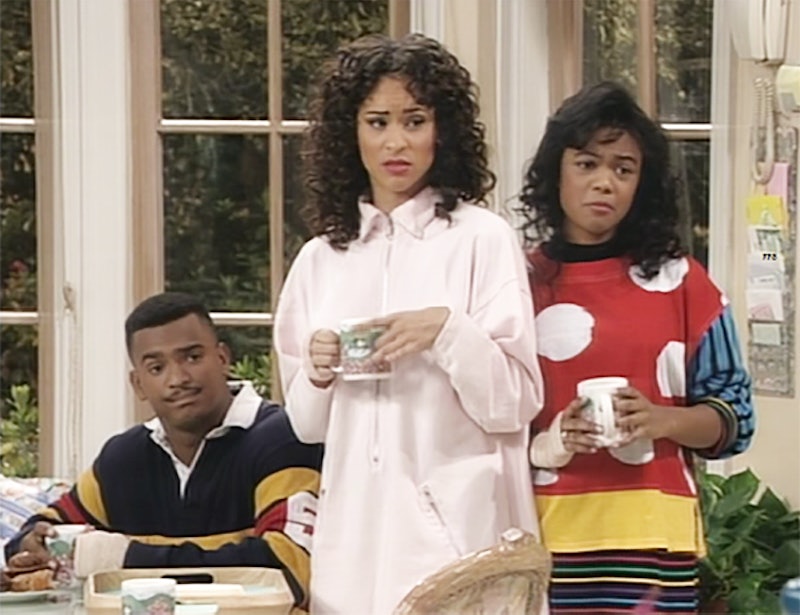 Whenever I'm having a bad day, I love nothing better than escaping into a classic episode of an old TV show. And The Fresh Prince Of Bel-Air isn't just totally therapeutic viewing for stirring up some big time chuckles; it's also got a lot of depth. Thanks to the daughters of the Banks family, there are a lot of lessons we can learn from Hilary and Ashley about being a woman. Both of their character arcs alone provided female viewers with some admirably progressive development. Between the first and the final Fresh Prince episode, Hilary and Ashley matured and gained some amazing perspective and much needed independence worth celebrating.

But, between those two bench marks of the series, there were also countless moments of empowering merit, whre Hilary and Ashley proudly became their own women. Whether it was pursuing their dreams, being unafraid to speak out against overprotective or slimy men, or simply taking control of their lives, their sexuality, and their finances, Hilary and Ashley lived out plenty of moments worth taking inspiration from.

So should you be needing some crucial inspiration in life, love, or your career, then you can actually learn some pretty terrific lessons from Hilary and Ashley. Prepare to step it up, ladies.

1. Intelligence And Self-Respect Can Be More Powerful Than Sex Appeal

Ashley soon discovered that the boys in her school had only a fleeting interest in her based on her sexuality. But she also learned that her ferocious smarts, sense of self worth, and wicked personality were her real assets, and the parts of herself that won people over.

2. Discovering Your Own Independence Is Everything

Both Hilary and Ashley came into their own as women when they stopped being financially dependent on handouts from Daddy Banks. With financial independence comes the freedom to make your own decisions, pursue your own ambitions, and reap the great awards of hard work and a fulfilling career path.

3. Self-Belief Is A Worthwhile Pursuit

Before Hilary became a TV weather girl, and before Ashley realized that she wanted to seriously become a performer, both of the Banks sisters seem to seriously lack confidence in their professional capabilities. Both Hilary and Ashley didn't allow for their individual failures or rejections to hold them back, but instead perservered and believed in themselves.

4. There's Nothing Wrong With Having High Standards

Be it in love, ambition, lifestyle, or simply fashion, both Ashley and Hilary were never ones to compromise for anything less than they knew they deserved. That's a lesson I think we can all benefit from taking on board. We all deserve the absolute best.

5. Being Comfortable In Your Own Skin Is Something To Be Proud Of

Though they may have struggled in confidence in other areas of their life, both Ashley and Hilary were commendably comfortable with how they looked and their physical expressions of who they were. That's a feeling that all women deserve to own.

6. Fashion Can Be An Empowering Form Of Expression

As the show progressed, so did both Hilary and Ashley's wardrobes. While Hilary's managed to reflect the character's desire to be taken more seriously within a professional context, Ashley's became more fun and unapolgetically mature (even if Phil and Will disapproved of all those crop tops and short skirts). For both of these characters, this shift in style was clearly a proud proclamation of personal empowerment.

7. Women Shouldn't Be Shamed For How They Look

Speaking of which, whenever Will, Phil or Carlton did try and shame Hilary and Ashley for their fashion choices, they were always put in their place by the ladies.

8. A Fulfilling Career Is About More Than Just Money

I mean, sure, the sisters come from a very rich family, but the primary focus of their career paths was never financial; rather, it was one of personal enjoyment. With the opportunity to do just about any job they wanted, both characters had the freedom to stay true to their dreams and ambitions.

9. Women Should Be Supportive Of Each Other

Throughout Fresh Prince, both Hilary and Ashley make an effort to look out for and support each other (they even move in together in the finale). And, though Hilary may have spent more than a few seasons gleefully tearing women down, she soon learned that it was way better to help her fellow ladies.

10. Sometimes You Have To Kiss A Lot Of Frogs To Find Your Prince

And sometimes you have to watch your fiance accidentally die in a freak accident while proposing to you on live TV (poor Hilary). Both of the sisters made their fair share of dating mistakes along the way, but it only boldened their resolve to find the perfect partner for themselves afterwards.

11. Don't Be Afraid To Speak Your Mind

Be it against Phil, Will, Carlton, or Jeffrey, both Hilary and Ashley weren't afraid to speak out against any men in their lives who needed to hear some crucial home truths.

12. Bodily Autonomy Is Essential For All Women

There are a few episodes in the Fresh Prince that focus on discussions surrounding Ashley's appearance and whether or not her outfits are too sexual for her age. However, Ashley always managed to wonderfully defend her right to dress and enjoy her own body however she wanted, regardless of what the men in her life were telling her. I have so much applause for that.

You no doubt remember the episode where Ashley receives some sex advice from Hilary, while she debates whether or not she's ready to have sex for the first time. Not only is sex represented positively, and without shame (hooray!), but both of the characters engage in a conversation that highlights the importance (and the complexities) of consent.

14. Feeling Smart And Capable Is A Mindset

Seriously, the more a woman hears, or even tells herself, that she's stupid or incapable, the more she'll start to actually believe that might be true. Hilary, though she might not have been the brightest character, fought through this mindset when she struggled to find herself her first job. But she proved that she was more than smart enough and capable to find herself one, even her family doubted her potential to do so.

I feel completely enlightened and powerful now. Fresh Prince may have been a ton of fun as a TV show, but it also came with a lot of important messages that many other shows failed to raise.