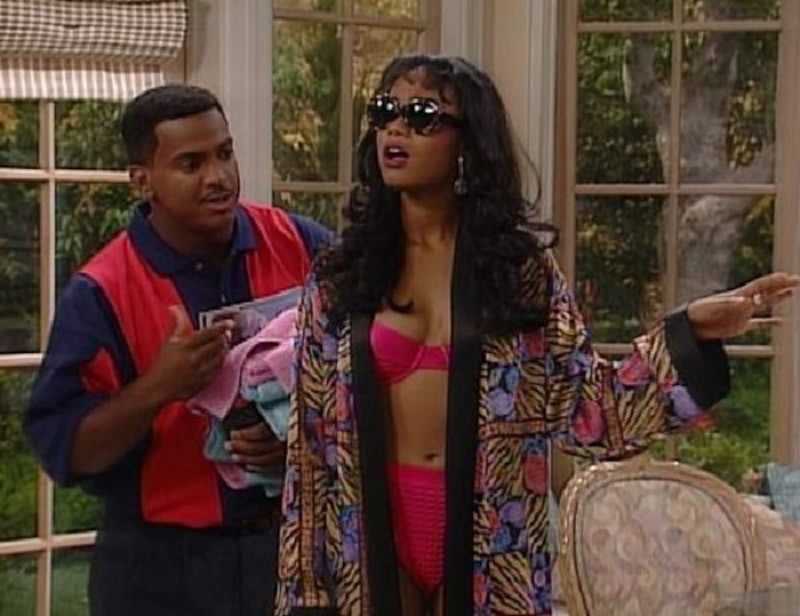 If you count yourself as a fan of the Fresh Prince Of Bel-Air, then you're already well aware of just how much each character on the show seemed to change from the pilot episode to the series finale. For instance, between the pilot and final episode, Hilary became a feminist icon on Fresh Prince, and Carlton became a confident, streetwise stud who learned how to have fun. But actually, the character who changed the most on Fresh Prince was Ashley Banks. Between the first and final episode, Ashley's character arc was truly empowering, as it depicted her discovering her power as a woman, her talents, and her drive.

As viewers, we watched Ashley grow up from ages 12 to 18 on the show, and were provided with all of the confusing, exciting, sometimes hurtful and sometimes wonderful experiences that a young woman goes through during that time. The character undoubtedly matured along the way, and the difference between the confident, driven Ashley of Season 6 is startlingly different to the coy, sheepish Ashley of Season 1. Her evolution is a powerful one. When we said goodbye to her, I, for one, definitely felt like I was proudly waving off my very own little sister as she left for college.

1. She Developed A Firm Sense Of Confidence

Ever since the pilot episode, it was evident that Ashley was a smart, creative and talented young woman with a lot of potential. And though her parents supported and encouraged her, she needed to become secure in herself in her own way and pursue her life on her own terms to achieve that. By the final episode, she's forthright, driven and full of fiery confidence in every way.

2. She Learned To Be Responsible For Her Own Decisions

Being the baby of the family for so long put added pressure onto Ashley: she was over-protected by not just her parents, but also by Carlton, Hilary, and Will. For a while, it seemed as though her character was going to continue making decisions based on her family's opinion, but as she grew up, she worked out what she wanted and needed from life — then she went out and did it, without apology.

3. She Figured Out How To Utilize Her Potential

Though it's clear that she could be capable of having just about any career she wanted, Ashley's talents as a singer and a model are clear from the very beginning (who can forget her perfectly reciting the rap that Will taught her? Flawless). Though her initially successful singing career fizzled out after just one hit, she didn't let that setback deter her, and by the finale she left to study her passion in New York.

4. She Understood The Value Of Hard Work

She might have had a lot of potential in various seemingly glamorous industries, but it still didn't stop Ashley from going to work at the Dippity Do Dog for a while in Season 6. Would Ashley from the earlier seasons of Fresh Prince have done the same? Unlikely. But, by the final season of the show, the character understood the value of hard work, and why it was crucial if she wanted to get to where she wants to be in life.

5. She Discovered That Self-Respect Led To True Love

Like many teenage girls, Ashley spent a while convinced that the only way to attract boys was to give them exactly what she thought they wanted: sex appeal. But, as the above clip shows, Will explains that there's a lot more to her, and to women, that deserves to be respected and celebrated. As the seasons go on and the character grows up, it's clear that Ashley takes this to heart. She completely respects herself and she only dates boys who respect her just as much.

I mean, what do you expect when you have a guy like Will as a cousin? Like he did for Carlton, Will helped to teach Ashley how to be a little more credible in school and how not to be an easy target for bullies. Though she barely nailed the whole intimidating-those-who-threaten-you angle of Will's self-defense class, she clearly took much of his ethos on board. By Season 6, Ashley was capable of sticking up for herself whenever she needed to.

Oh boy, do you all remember when Ashley quit her expensive private school so she could attend public school, instead? Yeah, not only did she do that but she also kept that massive fact a total secret from her parents. This, as you may remember, didn't go down too well. By the finale, Ashley was able to be open and truthful about herself, her life and her experiences to her family.

8. She Learned That Sometimes The Alternative Path Was The Better One

From not getting into the choir class in school but learning how to rap from cousin Will, to dropping out of a professional music class to instead learn drums from Jazz, to experiencing a failed music career but enrolling at a prestigious performing arts school in New York, Ashley has learned to adapt. Throughout her life, she was often faced with having her dreams and expectations challenged in some way, only to discover that the second option was actually the most interesting and best for her.

9. She Found Out That It Was Fine To Be A Little Rebellious

I mean, who wants to do what their parents say when they're a teenager? It's no fun. And though Ashley, at age 12 in Season 1, is clearly something of an angel who follows her parents rules, as she matures, she also appears to discover the joy of rebelling against their wishes for her. Her clothes became less conservative and she started living her life on her own terms.

10. She Knew How To Trust In Her Own Instincts

Ashley matured into the sort of character who understood her own needs and desires and trusted her own instincts regarding them, no matter what anyone else had to say about it. Both Will and Carlton frequently have a little too much to say regarding what decisions Ashley should make in her life (and usually concerning her decision to dress in a certain way or to have sex), and it was empowering to watch her stand up against them and do what she felt was right for her.

11. She Took Influence From All The Best Traits Of Her Family

Although she didn't always share the same values as every member of her family, or even get along with them all, there's no denying she adored all of them. And their influence is evident by the woman she proudly is by the final episode of the show — she has her mother's pride, her father's intelligence, her cousin's cool, her big brother's drive, and her sister's sense of glamor. And she's all the better for it.

12. She Didn't Let Anything Get In The Way Of Her Dreams

Though she had repeated knocks against her self-esteem when her singing career didn't quite take off as planned, she never let it deter her against trying again. Though she was cautious, shy, and insecure about sharing her talents with the world in the first few seasons, as her confidence builds so does her ambition. And whenever she faced a failure in the later seasons, it didn't change a thing about where she saw herself in the future.

13. She Matured Into A Strong, Self-Possessed Woman

Seriously, she could stick up for herself, follow her dreams, be forthright, be driven, be fearless and march towards her own future with a self-assuredness that all women should possess for themselves. In the pilot episode, Ashley was still a dependent young girl, unsure about who she was or where she was going. But by the finale, she was going places, and she wasn't dependent on anyone else but herself to get there.

Ashley's transformation on Fresh Prince was truly inspiring. She became the woman that she was always destined to be, and refused to let anyone or anything stand in the way of that. And that's truly an empowering message.