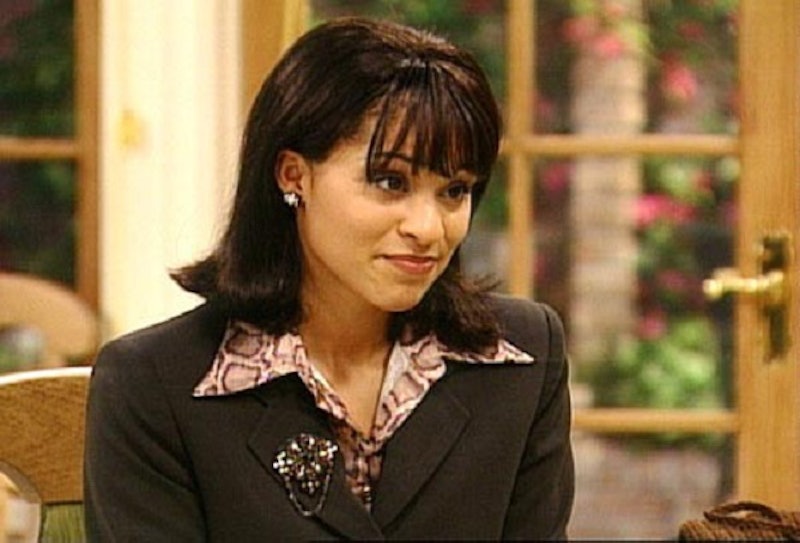 Sometimes inspiration can come from the most unexpected of places. And when it comes to television, the Fresh Prince Of Bel Air was often a show which could have you cackling on the floor of your living room one minute, and inspiring you the next. There's moments of inspiration to be found in some of the best episodes of Fresh Prince, but if you really want your heart to be filled full of glee and drive, then you're best looking at how all the characters changed throughout the show. Sure, Will became more academic and driven, and Carlton's change from pilot to finale on Fresh Prince saw him getting more street-wise and confident, overall, but Hilary's transformation was jaw-dropping. At the start of Fresh Prince, she's something of a shallow, sponging mean girl, but by the finale? Hilary is an absolute feminist icon, and she's inspiring as hell.

From becoming completely financially independent to understanding the true values of life, love and having a fulfilling career, Hilary blooms into a character which every woman can take strength from. Her character arc is proof that there's always an opportunity to turn your life around, re-evaluate your priorities and become a better person. And that's inspiring for everyone. Here's all the crucial ways that Hilary bettered herself between the pilot and the finale of the show:

In the beginning, all that mattered to Hilary was good looks, great clothes and some money, honey. But by the finale she had come to understand that all these things weren't everything. Instead, she came to value the bond of family, self-respect and her own invaluable independence (and yeah, she still look great, had lit style and tons of money, but still...).

2. She Understood The Value Of Money

When you're constantly relying on another person's wages to sustain your frivolous, flamboyant lifestyle then you never understand the value of a single dollar of that spend. As soon as Hilary finally got her own job, however, she finally understand how great it is to spend money that you worked hard for and earned all on your own.

3. She Became A Self-Made Career Woman

OK, so Hilary got pretty lucky when she managed to score herself a job as a TV weather girl. But, lucky or not, she still managed to work hard and progress within her career enough to get her own talk show by the sixth and final season.

4. The Concept Of Pregnancy Became Way Less Gross To Her

Sure, babies aren't for everyone, but one definitive sign that Hilary was maturing during Fresh Prince was her surprise decision that she wanted a child. After a woman gave birth on her show, Hilary holds the baby in her arms and feels overjoyed, deciding that she wants this for herself. Though she eventually decides against the idea, the very concept that the once self-centered Hilary could foresee herself taking care of a child is a big stretch from the character we knew in the pilot.

5. She Could Dish Out Useful Advice

Let's face it, the only topic of advice that Hilary would have been an expert on in the early seasons of Fresh Prince would have been, Prada or Armani? However, by the final season of the show, Hilary is capable of dishing out some truly empowering, and incredibly useful, advice to her younger sister Ashley about when the right time to have sex is. It's also possibly one of the first times the character made me full on sob, so there's also that.

6. She Could Finally (Kind Of) Cook A Meal For Herself

And yeah, her initial experiment in the kitchen totally ended in disaster, but her willingness to at least try and make a family meal was endearing and showed definite growth.

7. She Finally Valued The Hard Work Of Others

If there's one thing that having a job of your own teaches you, it's that work is hard. It's tiring, it can get in the way of your plans and you have to sometimes put up with people and situations which are less than pleasant. Having a job definitely delivered Hilary with some much needed perspective on work, and finally gave her some respect for anyone who had ever been unlucky enough to serve her in some way (including poor Geoffrey).

8. She Was Realistic About Love

If there's one thing which will help push you to gain some crucial perspective of love, it's demanding your boyfriend to propose to you in a grand manner and watching him die live on TV as a result. Poor Hilary. It was a rough way for her to learn what's important in life, but at least she got there in the end.

Gone were the days of Hilary trying to go "grocery shopping" in her parent's fridge. Hilary got herself a career, got her own place, got her own life and yes, even started to get her own groceries. She became totally independent, and rightfully proud of it.

Hilary was always ridiculously stylish, but by the time she got her own talk show, she'd swapped bold, skin bearing dresses and truly enormous hats for sleek, structured outfits which screamed business. Hilary was less about having fun all the time, and was clearly all about her career by the end.

11. She Stops Taking Her Family For Granted

It's clear at the start of Fresh Prince that Hilary sees her family as being little more than a domestic bank and a group of people that she's forced to share a living space with. She could be kind of cruel to them all. But after the episode where Will gets shot? Well, for the most part, she starts being a little kinder to her entire family overall and genuinely seems to love, appreciate and accept them all as a result.

12. She Was No Longer Mean Just For The Sake Of It

The Queen of dry, cutting quips, Hilary was a total mean girl at the start of the show and just about anybody and everybody was the victim of her insults at one point or another. But with maturity comes great empathy, and though she may have slipped back into mean girl mode from time to time, she was definitely more forgiving towards humanity by the finale.

13. She Finally Knew Who She Was And What She Wanted From Life

Sometimes, job interviews can provide you with painful epiphanies. When Hilary went on her first one, it was clear that she was going to bomb it simply because she didn't understand who she was yet. There was no ambition, no drive and no concept of why she would be good at or even wanted the job. By the end of the show, she's self-assured and driven — she knows exactly what she wants from life and isn't afraid to go for it.

Like, hello — Hilary wasn't the vapid, self-obsessed, airhead that many (part-time, lets be honest) Fresh Prince fans may remember her to be. By the end of the show she was actually pretty inspiring, and I'm all here for that character arc. Hilary, forever.