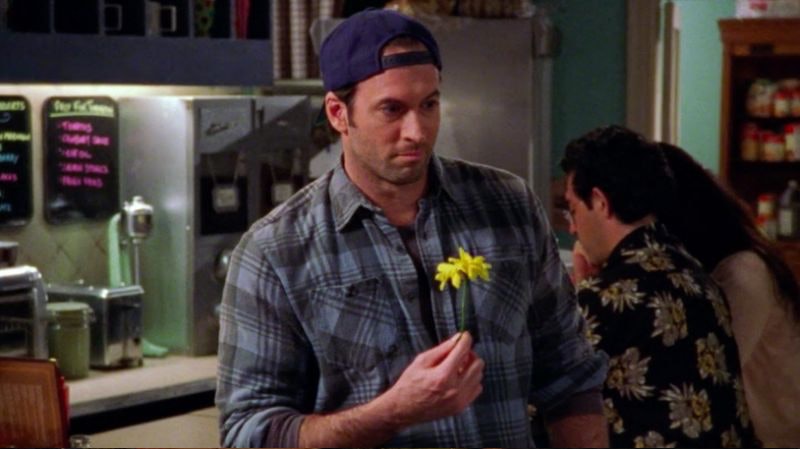 Picture in your mind the opening scene of the Gilmore Girls pilot: Lorelai rushes to the counter at the local diner demanding coffee, and who turns around? Why, Daisy, of course. You know Daisy, the local gruff, diner owner who banters with Lorelai about her coffee-drinking habits? Chances are you know her better as Luke. According to Entertainment Weekly, Luke Danes was almost Daisy on Gilmore Girls , and only became Luke after the network asked Amy Sherman-Palladino to include another male character on the show. It's OK to be shocked. I am right there with you.

In an EW interview, Sherman-Palladino revealed she simply picked a random character — Daisy — and turned her into Luke to satisfy the network. The character was in such early stages that she did not bother changing any of the dialogue, so those words coming out of Luke's mouth in the pilot would likely be the same, even if he had never existed. That is the most chilling thought of all. There is an alternate universe out there where there is no Luke in Stars Hollow and Gilmore Girls is irrevocably changed as a result.

Neither Luke nor Daisy was intended to be Lorelai's love interest, so unless she and Daisy had exhibited the same on-screen chemistry as Luke and Lorelai, it is unlikely Daisy and Lorelai would have fallen in love. Instead, the entire trajectory of the show would have changed due to the Luke-shaped hole in the Stars Hollow universe. Let's take a tour down the rabbit hole and imagine a world where this hypothetical Daisy replaced Luke in the Gilmore Girls family.

Lorelai's Great Love Story May Very Well Have Been Christopher

Jess Would Have Moved In With His Aunt

One of Jess' big arcs was accepting Luke as a father figure. If he had lived with his Aunt Daisy instead, the dynamic would have been completely changed. Would Daisy and Liz's parenting styles have been contrasted? Or would Jess' mom have walked out instead of his dad? There is even a possibility Jess never would have existed depending on how prominent the character of Daisy was in the show.

Taylor & Daisy Would Probably Have Been A Couple

Luke was basically an adorably grumpy old man, so I would not have been at all surprised if Daisy was slightly older. As a result, the constant bickering between Taylor and Daisy could have easily resulted in romance. Just sit and think about that for a while.

In the early days, Luke was always prodding Lorelai to eat more veggies and drink less coffee, while dispensing sage advice. Face it, if Luke had been Daisy, Daisy and Lorelai's relationship would have been that of a surrogate mom and daughter team. With Sookie as her best friend, Daisy would have been the woman Lorelai turned to when she needed food, comfort, and advice.

The Diner Would Have Been Totally Different

I imagine the story of the diner's hardware store roots being preserved in honor of the Danes' patriarch would have stayed the same, but even if Daisy was as cantankerous as Luke, there's no way the diner's atmosphere would have been exactly the same. Sherman-Palladino was able to swap out the dialogue between Daisy and Luke in the beginning, but eventually Daisy would have become her own person, and it would be naive to think she would have possessed all of Luke's quirks. As a result, the diner would have changed in ways that are unfathomable without fully understanding Daisy's planned role in Stars Hollow.

Daisy would have been an iconic character just like every other character Sherman-Palladino created, but I am beyond happy she became Luke. A world without Luke and Lorelai is one I don't want to dwell on for too long.