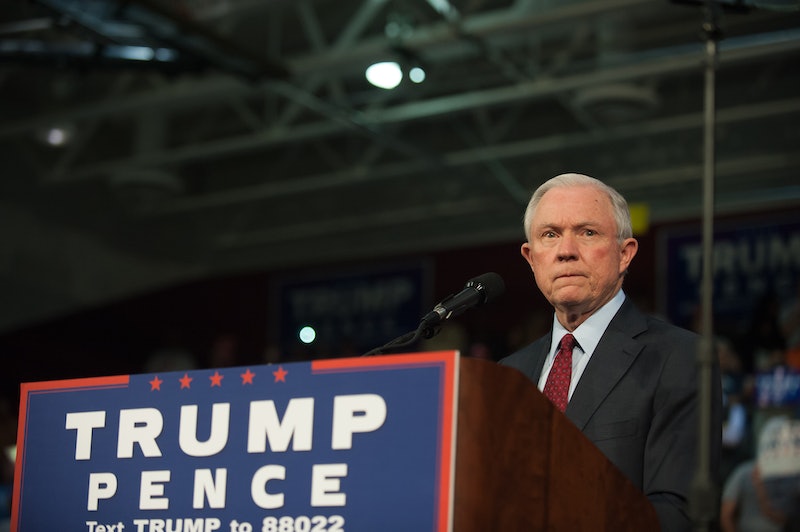 Donald Trump has chosen Alabama Sen. Jeff Sessions to serve as America’s next attorney general. On the one hand, it could be worse. Before Sessions was confirmed as the pick, other names floated for the job included Ted Cruz, Rudy Giuliani, and Chris Christie, all of whom would be nightmarish in their own ways. On the other hand, the guy Trump ultimately chose is still nothing short of atrocious, and will most likely inflict serious, lasting damage on the country. If you don’t believe me, here are a few stories about Sessions and his past that will make you shudder.

Sessions has a long resume, thus proving that politicians can have long resumes and still be morally reprehensible. He is a longtime opponent of LGBT rights, abortion access, comprehensive sex education, hate crimes protections, renewable energy, and just about everything else that a senator should be in favor of. Moreover, Sessions has a long, storied history as skeptic and legal opponent of black civil rights, and there’s no shortage of evidence to this point.

Some of these reports have been confirmed by Sessions himself. Others, he’s denied, while some he hasn’t commented on. Either way, any one of them is sufficient reason to fear and oppose a Sessions-led Justice Department.

He Opposed The Voting Rights Act

You know, the landmark 1965 civil rights law that reversed years of disenfranchisement and finally gave black Americans in the South the unfettered right to vote (well, before the Supreme Court gutted the act in 2013, anyway). Sessions called the VRA a “piece of intrusive legislation,” and stood by that characterization during later Senate confirmation hearings.

He Prosecuted Activists For Trying To Register Black Voters

In the mid-1980s, from his post as U.S. attorney for the Southern District of Alabama, Sessions prosecuted three civil rights leaders who had been successfully registering black voters. Sessions accused them of fraud, but a subsequent investigation found only 14 potentially fraudulent ballots out of 1.7 million cast. Thankfully, Sessions was unsuccessful, and the activists were acquitted in a number of hours.

He Has Allegedly Said A Ton Of Racist Things

Sessions once referred to a white civil rights lawyer as “a disgrace to his race,” according to J. Gerald Hebert, who worked with Sessions in the Justice Department. Thomas Figures, a black attorney who also worked with Sessions, said that Sessions called him “boy” and warned him to “be careful what you say to white folks.” Sessions, by Figures’ account, also said that he was “OK” with the Ku Klux Klan, but changed his mind after learning that they were “pot-smokers.” Herbert and Figures made these claims in sworn testimonies to Congress. Sessions has denied all of these allegations.

He’s Not A Fan Of Black Civil Rights Organizations

Figures also claimed that Sessions referred to the NAACP, the Southern Christian Leadership Conference, Operation PUSH, and the National Council of Churches as “un-American” and “Communist-inspired.” In what’s surely just a coincidence, all four organizations are explicitly or implicitly focused on promoting black civil rights.

He Voted Against The Violence Against Women Act

Sessions voted against the VAWA’s reauthorization in 2013, continuing his tradition of opposing anything that remotely threatens white male supremacy in the United States.

Charles Pickering is a retired judge who opposes Roe v. Wade and has defended anti-miscegenation laws (that is, laws prohibiting interracial marriage). He has blamed civil rights leaders for stirring up “turmoil and racial hatred” and disrupting “our southern way of life” (wink wink), and once reduced the sentence of cross burner, writing it off as a “drunken prank.” Sessions has called Pickering a “leader for racial harmony.”

He’s Too Extreme Even For Republicans

Ronald Reagan nominated Sessions to serve on a federal bench in 1986. At that point, the Senate had confirmed around 200 of Reagan’s judicial appointees — but it drew the line at Sessions, who became the only second nominee in 50 years to be rejected by the Senate Judiciary Committee. The committee voted him down largely due to the incidents described above, which Democrats — led by Joe Biden — hammered home relentlessly in his confirmation hearings.

If you'd like to call your senator to oppose Sessions' appointment as attorney general, now would be a good time.