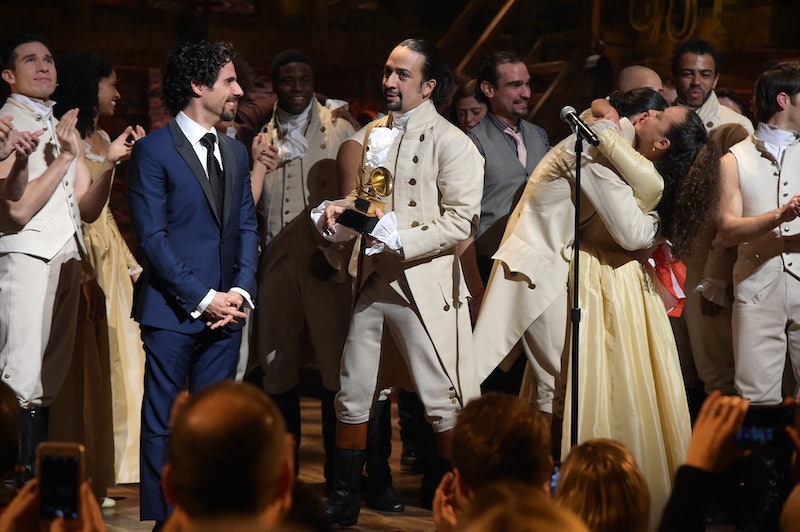 On Friday night, vice-president elect Mike Pence attended a Hamilton showing in New York. Following the performance, Brandon Victor Dixon (who plays Aaron Burr) delivered a powerful statement that implored the new Republican administration to work "on behalf of all Americans." The statement, which wrapped with "We truly thank you for sharing this show, this wonderful American story told by a diverse group of men, women, of different colors, creeds, and orientation," was meant to land on Pence's ears.

Though Pence hasn't directly responded yet, president-elect Trump has shared his own thoughts about the hopeful utterance on Twitter. He wrote, "Our wonderful future V.P. Mike Pence was harassed last night at the theater by the cast of Hamilton, cameras blazing.This should not happen!" Directly after, he followed up with: "The Theater must always be a safe and special place. The cast of Hamilton was very rude last night to a very good man, Mike Pence. Apologize!"

Twitter users have pointed out the hypocrisy of these 140-character diatribes. Considering Trump's harsh words about women, minorities, and immigrants, the president-elect's call for a musical theatre to be a "safe space" leaks with irony. (Asking to be treated with equality in a calm, peaceful manner during a Broadway production didn't put anyone in harm's way.)

Here is a round-up of some of the best lyrical responses:

This tweet replies to Trump's remarks, using lyrics from Hamilton's "The Schuyler Sisters" to make a valid point about safety in America.

Meanwhile, another user quoted "History Has It's Eyes On You" and "My Shot." The full lyrics are "I'm just like my country / I'm young, scrappy, and hungry / And I'm not throwing away my shot."

The tweet below shared "The World Was Wide Enough" lyrics, which celebrate immigrants with lines like "America, you great unfinished symphony, you sent for me / You Let me make a difference / A place where even orphan immigrants / Can leave their fingerprints and rise up." These words are specially prescient given Trump's overtly hostile treatment of immigrants during his campaign.

Multiple Twitter users pointed out how relevant the lyrics, "Winning was easy / Governing's harder," from "Cabinet Battle #1" are to Trump's future presidency

"We, sir — we — are the diverse America who are alarmed and anxious that your new administration will not protect us, our planet, our children, our parents, or defend us and uphold our inalienable rights. We truly hope that this show has inspired you to uphold our American values and to work on behalf all of us.”

While our president elect doesn't seem to be listening to the content of Dixon's important —and fair — request, at least Twitter uses have Hamilton lyrics to inspire and uphold their own American values.