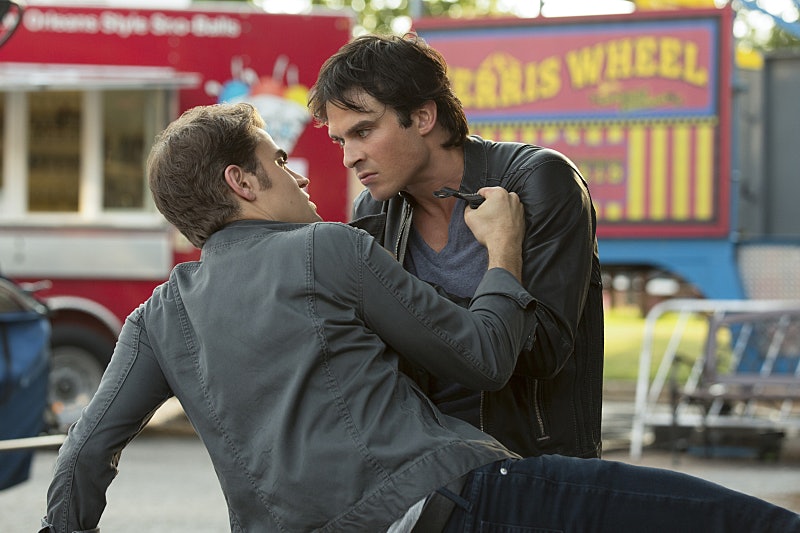 In the wake of Tyler's death, Stefan was at a loss on The Vampire Diaries . Does killing Tyler make Damon is irredeemable? Or does it mean Stefan just has to fight twice as hard to save him? In "Coming Home Was A Mistake," Stefan made his decision: he'd stop Damon from doing any more damage, and that means they need to "put him down." Don't worry, guys, ominous as those words are, Stefan didn't mean he wants to kill his brother. He just wants to put him to sleep for a while in a nice, comfy coffin. Stefan managed to stop Damon on The Vampire Diaries , but his victory was short-lived.

After Damon ambushed the gang at Tyler's funeral, Stefan made up his mind to capture Damon and put him to sleep so he couldn't hurt anyone else. While Damon rested, he hoped to find a way to sever his connection to Sybil and break him free of her. Of course, then he'd have to help Damon turn his humanity back on and deal with his overwhelming guilt, but he'd deal with that later. With Alaric and Caroline on his side, he set to work.

Damon, meanwhile, was starting to feel his humanity creep back up. Seeing the pain he caused at Tyler's funeral and getting assurance from Caroline and Matt that he had severed ties with them, he was sad and confused. Damon immediately went to see Sybil to demand why he killed Tyler, even though Sybil did not directly order him to. She tells him it's because a part of him wants to be tied to her, and encourages him once again to turn off his humanity. Or, he can go see Stefan if that's what he really wants. And so, he does. Damon crashed the Mystic Falls carnival only to end up with a back full of vervaine darts — courtesy of one Caroline Forbes — and placed back in his coffin.

Unfortunately, a series of events allowed Sybil to be alone in her Armory cell without the tuning fork ringing, giving her the ability to use her powers to escape. She left, taking the tuning fork with her, fetched Damon, and is now on the loose. Sybil's evil plans are clearly just beginning.