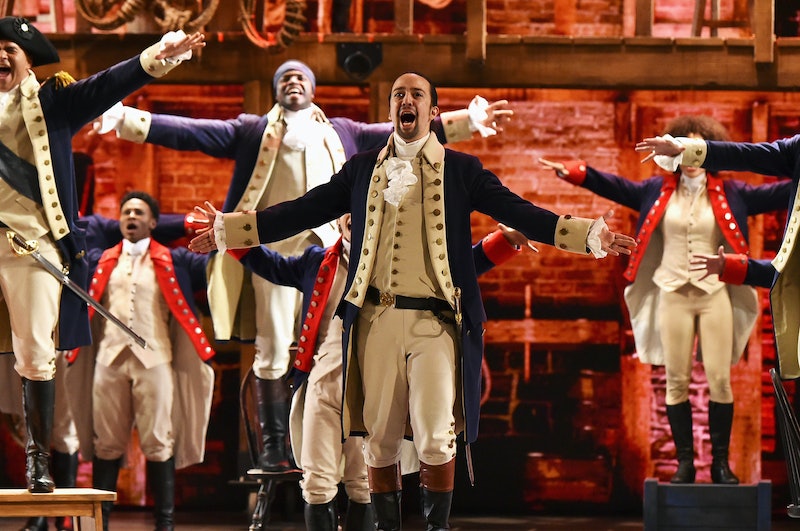 There's a time and a place for everything. With that in mind, I think it's fair to suggest that few people were expecting vice president-elect Mike Pence to attend a performance of Hamilton so soon after the presidential election. After all, Hamilton participated in multiple Democratic fundraisers, and also features a diverse cast and crew made up of various creeds, sexual orientations, and ethnicities — people who might be understandably concerned by the political beliefs and legislation currently and previously raised by both Pence and his president-elect, Donald Trump. So it also makes sense that the VP-elect's presence would also have an impact on the show, with several reports stating that some Hamilton lyrics prompted more applause at Pence's expense.

Pence, who apparently entered Broadway's Richard Rodgers Theatre to a series of a series of boos and cheers, was also directly addressed by actor Brandon Victor Dixon on stage during the curtain call of the show. In a powerful speech, Dixon requested that the audience stop booing Pence before stating to him, "We are the diverse America who are alarmed and anxious that your new administration will not protect us, our planet, our children, our parents, or defend us and uphold our inalienable rights, sir," and "We truly hope this show has inspired you to uphold our American values, and work on behalf of all of us."

Dixon also sincerely thanked Pence for attending the show and told him that he was "welcome" to be there. However, judging from several alleged reports from the show, it sounds as though the performance, as well as the audience's reaction to it, couldn't help but be influenced by Pence's presence. And here's six times in which that was allegedly evident at the performance:

Though there are differing accounts online as to the level of response to this song, what is clearly evident is that the audience gave a major reaction to one line in particular. While Entertainment Weekly reports that the audience erupted in applause when Alexander Hamilton and Marquis de Lafayette sing the line, "Immigrants: We get the job done," The Hollywood Reporter stated that the beloved "Yorktown" line apparently provoked a standing ovation from the audience. Pence is known for being staunchly anti-immigration.

There was also an apparent notable reaction from the audience during the performance of "Cabinet Battle #2." At the end of the song, where George Washington hails over Hamilton, Thomas Jefferson makes the shady comment, "Daddy's calling" to infer that Hamilton is following Washington like a little boy. According to Billboard, it was at this line that the audience allegedly gasped, supposedly relating the suggestion to Pence's relationship to Trump.

Deadline reported that Pence apparently left the house during intermission and didn't get escorted back to his seat until after it had ended. Awkwardly, that just so happened to right in the middle of the song, "What'd I Miss?" The irony of which, I'm sure, was lost on nobody. However, unlike the rest of the songs on the list, this didn't elicit applause. According to Deadline, there were boos.

The Hollywood Reporter claimed that Rory O'Malley, who plays King George III in the show, apparently sang several portions of this song directly at Pence, and had to pause the show for a standing ovation after singing the lines, "Oceans rise, empires fall, it's much harder when it's your call" and "When your people say they hate you, don't come crawling back to me. You're on your own." Did you just hear something? Because I think I might have just heard a mic dropping somewhere.

Hamilton's sly jab at then-vice president, John Adams, in the song "Take A Break" also supposedly appeared to make an impact on the audience with the line: "John Adams doesn't have a real job anyway" receiving notable levels of applause, according to BroadwayWorld.com.

According to Vogue, more audience applause apparently followed Washington's remark that, "Winning is easy, young man, governing's harder." Many American citizens have raised concerns over president-elect Donald Trump's ability to govern effectively due to his lack of political experience (particularly with publications like The Wall Street Journal reporting that Trump wasn't fully aware of what being president entails).

The significance of, and reaction to, Pence's presence at Hamilton only goes to fortify my opinion that the show is truly one of the most profound, significant, and important of our entire generation. I can only hope that our vice president-elect had a simply wonderful and educational time at the show.