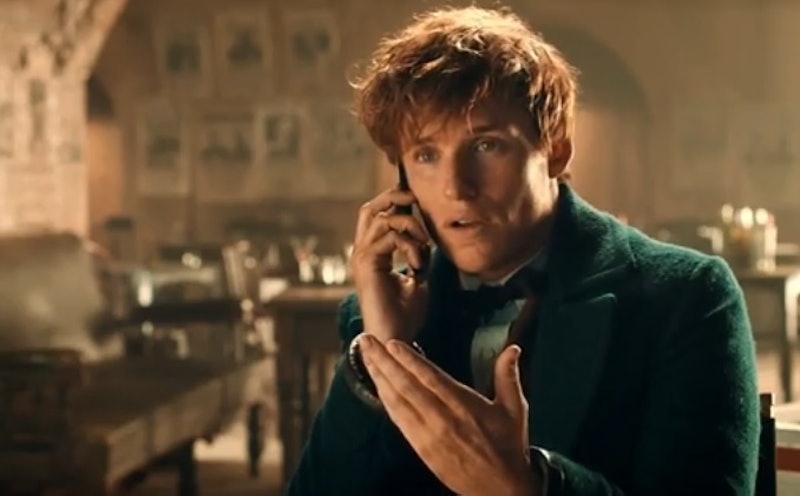 Happiness is Newt Scamander phoning The Doctor, Simon Cowell, and Britney Spears while Mary Berry pops in to offer Newt all the cakes. Seriously, all of them. This is the beautiful reality you will find in Eddie Redmayne's BBC Children in Need sketch, which is pure, undiluted joy for anglophiles and Harry Potter and Doctor Who-loving Americans. The nine-minute sketch finds Redmayne patched through to some familiar and not so familiar faces alike, as The Great British Baking Show hosts Mel and Sue fail spectacularly at their new jobs as switchboard operators for the BBC.

If you have never heard of the BBC's annual Children in Need charity event, it is a huge deal in the UK. The first Children in Need special aired in 1980, and since then, the event has earned millions of pounds for children with disabilities. According to the BBC, the 2016 fundraiser set a record by bringing in £46.6 million for the charity. Each year, the telethon takes over the BBC networks for a night full of sketches featuring the brightest British stars. This year's special aired on Friday, Nov. 18.

The mascot for the event is Pudsey Bear, a yellow bear with a colorful patch over his eye. It is Pudsey that Redmayne is trying in vain to reach via phone in the sketch, so he can volunteer to help out with the 2016 Children in Need event. Thanks to Mel and Sue, finding Pudsey means Redmayne has to speak to everyone who works for the BBC, from newscasters to the nuns from Call the Midwife and, of course, The Doctor, who gleefully tries to guess who Pudsey is. The whole sketch is as delightful and warm as a cup of tea and a slice of cake offered to you by Miss Berry, while you sit back and enjoy a new episode of Doctor Who .

Picking a favorite segment from the sketch is no easy task, especially since Redmayne does such a flawless job looking flustered, but his conversation with the one and only Spears is actual perfection. Spears stands in for all Americans when she asks, "Who's Pudsey?" As she continues to question Redmayne on how he got her number, he blames Mel and Sue, to which Spears deadpans, "What's a Melon Sue?" Spears truly is a national treasure.

However, if you happen to be more into 50 Shades of Grey than iconic pop stars and The Doctor, then the sketch will win you over with Jamie Dornan's quick cameo as a Pudsey superfan. It looks like Christian Grey has more than one secret room in his house...

The sketch has a happy ending as Redmayne finds Pudsey in the place he should have checked first — his magical suitcase. Whether you are familiar with the BBC's Children in Need event or not, you should add this sketch to your playlist of happy videos alongside all of those puppies sneezing and kittens snoring. And if you feel compelled to help after being introduced to the cuteness of Pudsey, you can find ways to donate to Children in Need here.