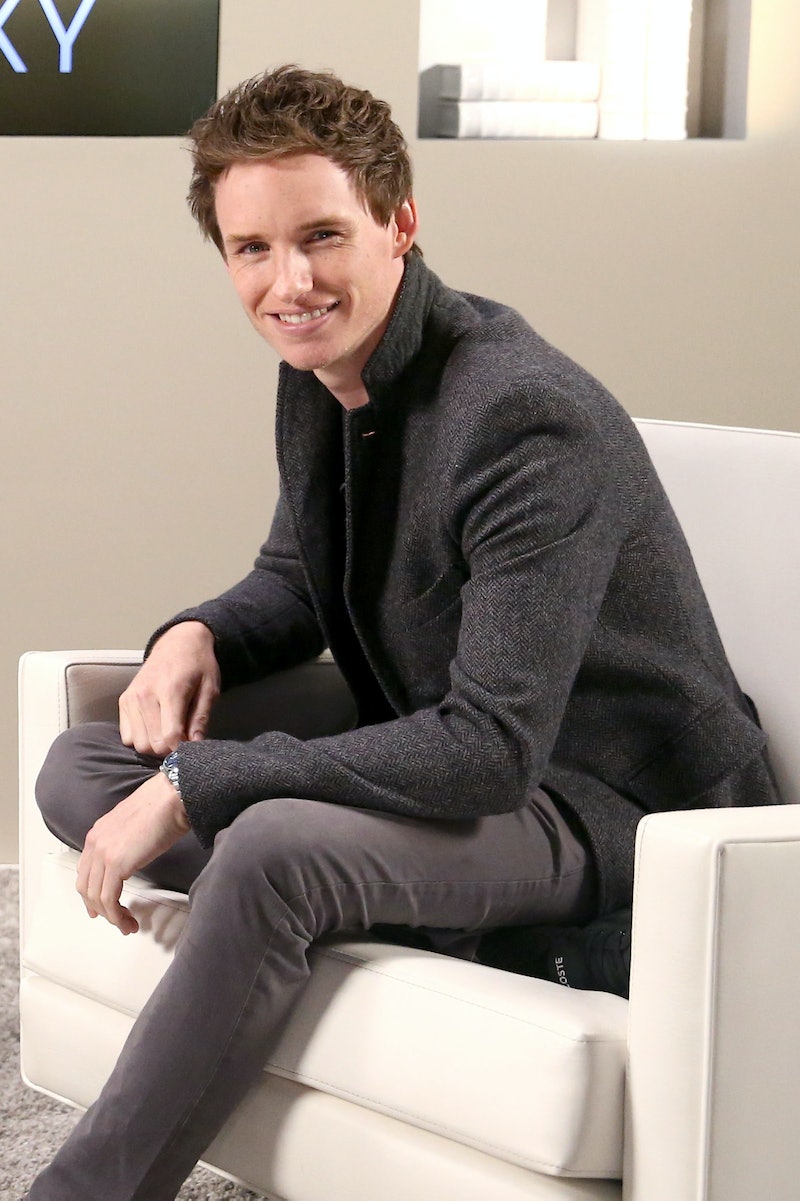 There are plenty of sexy and charismatic actors in Hollywood, but none of them have charmed me quite as much as The Theory of Everything star Eddie Redmayne. Although he's not a new face, he's been taking award season by storm with adorable speeches and candid red-carpet moments, and the best part about his Oscar campaign has been his press tour. From talking about "stalking" Jennifer Aniston with his wife on Jimmy Kimmel Live! to singing, dancing, and admitting his crush on Nala from The Lion King on The Graham Norton Show, he's delivered one amazing moment after the next. Each time he's on a late-night talk show, he gets even more lovable — even when he's talks about his wife, Hannah. Actually, especially when he's talking about his wife. It's like John Krasinski and Emily Blunt-level adorable.

One of his latest appearances was on Conan to promote Jupiter Ascending on Tuesday, in which he talked about getting ripped like Channing Tatum. The problem is that they cut all of the scenes with his abs. "I literally worked for months and it’s blink and you’ll miss," he told Conan O'Brien. "I don’t think there’s even a moment of observing the abs." In order to get that physique, Redmayne says he "did that thing that Hollywood actors do of being fed nothing but chicken for months and doing, like, eight gazillion stomach crunches." The fruits of his labor can be seen in one lonely poster (and the videos below), so check it out, along with eight of his other ridiculously charming moments.

Talking About His Amazing Abs

Going to frame that photo in my living room.

Performing "Consider Yourself" From Oliver!

Complete with a little jig of dance moves that cracks Anna Kendrick up.

And talking about how he desperately wanted to be a Weasley in Harry Potter.

Admitting His "Sexual Awakening" From The Lion King

His "weird obsession with Nala" is strangely adorable.

Stalking Jennifer Aniston With His Wife

He'll be there for you.

There was a serious man-crush alert when he got so nervous that he thanked Cooper twice.

"We're both Capricorns!" he exclaimed, which charmed me, Benedict Cumberbatch, Channing Tatum, and a whole round-table of actors.

With a side of giggle fits when he had to stick his nose in the glass.

He's obsessed with "Happy," but he cried watching Pharrell and Oprah.