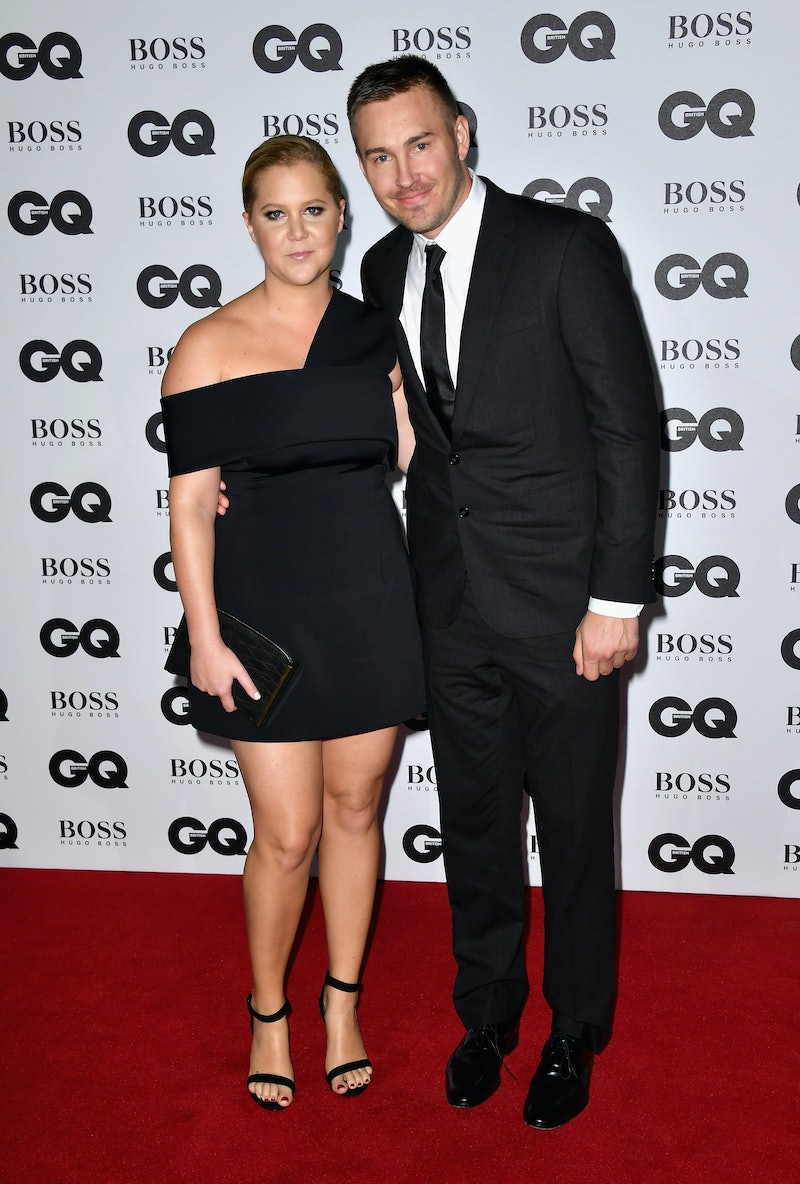 It's a very special moment for Amy Schumer and her beau, Ben Hanisch, as they celebrate their one-year anniversary. The pair decided to commemorate their enduring love for one another on their respective Instagrams on this beautiful occasion. And I think it's safe to say that each half of the romantic duo wrote tributes that were very, er, expected, considering what fans know about them. For Schumer's anniversary snap, she posted a semi-unflattering and obscure picture of Hanisch, as he chomps down on a burger. Adding to the hilarity was Schumer's romantically tart caption: "A year ago today I met the love of my life. Happy anniversary f*ckface. #iwanttoseeotherpeople." Naturally, that hashtag is just part of the humor of it all, but one thing rings true, and that is Schumer's very apparent affection for her boyfriend.

By celebrity standards, Schumer and Hanisch have maintained a relatively private relationship. While they occasionally pop up in each other's social media feeds and Hanisch is Schumer's date to certain events, they are by no means tabloid or gossip fodder. The story of their meeting is very modern (they met on a dating app) and Schumer's recollection about her first impressions of him are incredibly adorable (a rare thing for the casually blunt comedian). She told People, "Things were just really easy with him. There were no games, no waiting three days. It was clear and easy. He was so sweet. He didn’t know who I was. He’d heard my name.” My heart!

Hanisch's message is as perfectly sweet as Schumer's was lovingly salty. I'm going to be honest with you for a real hot sec: This guy is adorable. The definition of #BoyfriendGoals. And not, it's not just because he builds furniture or has a little facial scruff or is thoroughly supportive of his famous girlfriend. It's because he is shouting from the social media mountaintops about his undying love for Schumer and he's not afraid who knows it.

He wrote, "A year ago I met the love of my life. We both weren't looking for a relationship at the time, but something felt right from the very first night we met. We ended up spending 6 days in a row together. This pic was taken in New Orleans and was the night I knew I wanted to spend my life with her." I mean, come on. That is the caption of romance for a very real picture of romance. Don't ever let go of him, Schumer. Don't you dare.

And so, as we plow onward, we should probably hold on to this truly hilarious but precious public gesture of affection from Schumer and her boo. Stay golden, you two.