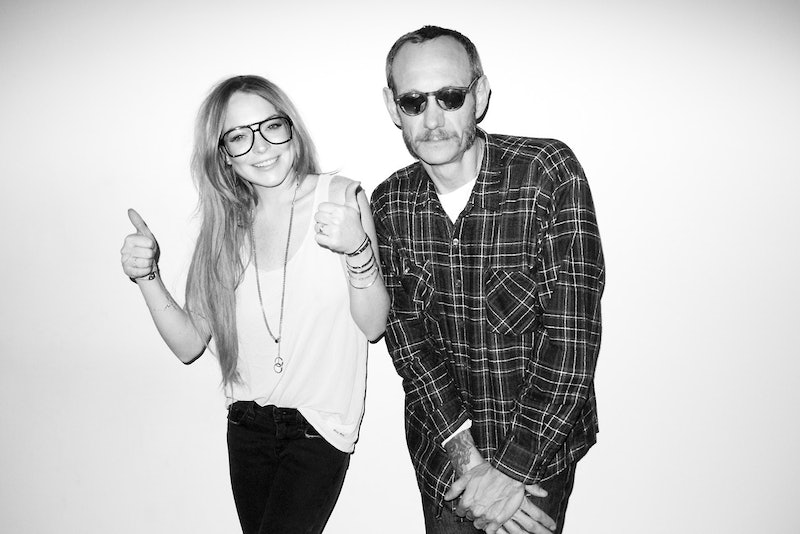 The names Terry Richardson and Lindsay Lohan in one sentence are enough to give anyone pause and immediately conjure up some skeezy memories. He's the controversial, albeit celeb-friendly photographer facing sexual harassment accusations from his former models, and she's... well, she's Lindsay Lohan. What more is there to say? Put these two together again and you've got... a new, shockingly tame Lindsay Lohan, Terry Richardson photo shoot. Maybe Lindsay actually listened to Oprah's advice, after all?

Richardson's photo shoots often lead towards the attention-grabbing shock factor (case in point: the sleazy, NSFW Miley Cyrus pics from last year and Lindsay Lohan's previous, troubling, gun-toting shots, among others), but this latest session seems to show a somewhat softer side of LiLo. While the new black-and-white photos show the 27-year-old smoking and wearing a "Parental Advisory" t-shirt (trust us, Lindsay, after we saw The Canyons, we knew your Mean Girls days were long gone), that's about as button-pushing as it gets. Aside from one deep-v dress, Lindsay is fully clothed, lucid, and in a series of pictures, smiling. Like, actually smiling.

While hanging out with someone like Terry Richardson probably wasn't what Oprah had in mind when she urged Lohan to "cut the bullshit" in that fateful interview, it's still the best the actress has looked in quite some time, even if her own OWN show leads us to believe otherwise. It's a pretty rare sight to look at photos of Lindsay Lohan and not feel an overwhelming sense of dread for her. Lindsay's never going to go back to being the spritely red head we met back in the late 90s, but maybe we can look forward to a better Lindsay? Or, at the very least, these can be a snapshot of a time when she was actually doing okay. Hopefully she'll be posing for the likes of Annie Leibovitz again soon, too.

Check out some of the highlights from LiLo's latest Richardson shoot here:

More like this
Amanda Seyfried Reflects On 'Mean Girls' & "Gross" Remarks That Men Made After It
By Jake Viswanath
20 Celebrity Couples Who You Forgot Dated In 2002
By Jake Viswanath
Sandra Bullock, Girlboss Extraordinaire
By Matt Harkins & Viviana Olen
Spice Girls’ Net Worth: The Richest Member Is Wealthier Than The Rest Combined
By Hugh McIntyre
Get Even More From Bustle — Sign Up For The Newsletter