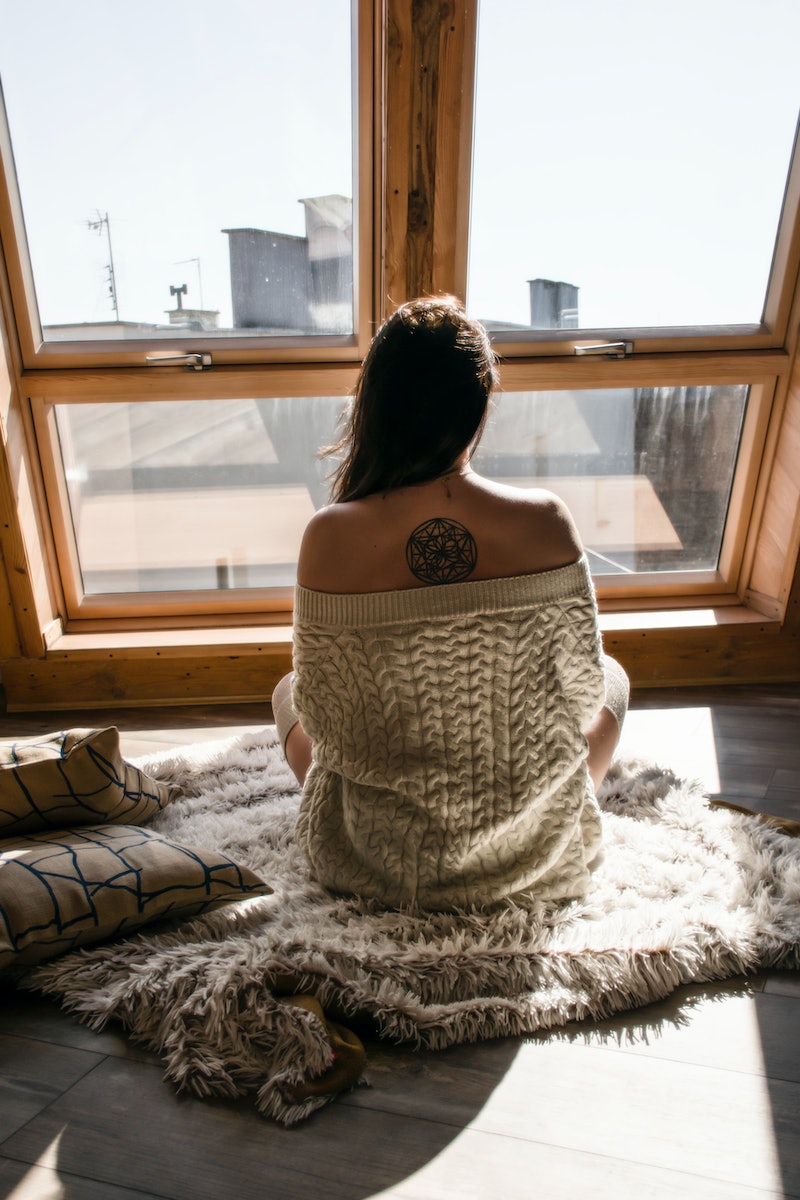 When I first learned about what orgasmic meditation is — a 15-minute mindfulness practice in which someone strokes the upper left quadrant of your clitoris up and down (specific, I know) — I laughed. But I was also a little intrigued. I attended an "OM" class this summer, where I learned more about the activity. Basically, the purpose is to tune into every sensation in your body, the same way you notice every thought in your head when you meditate or every subtle taste when you eat mindfully. Your partner is also supposed to focus on feeling your body and its reactions very precisely, so that very practiced OMers can actually tell how their partners want to be touched before they even say anything. And since it releases all sorts of endorphins, it helps people feel connected to their OM partners and to people in general.

Soon after I took the workshop, I got into a relationship. I didn't mention OM to my partner for a few months because I assumed he'd think it was weird. But when I sheepishly brought up and said I'd like to try it, to my surprise, he was as curious about it as I was.

We've OMed a handful of times since then, and while I haven't had any of the spiritual awakenings or 15-minute orgasms some of the practice's biggest fans describe, I have seen these benefits to my sex life.

1. It Takes The Focus Off Climax

That may sound contradictory, since it's called "orgasmic meditation," but OM actually redefines "orgasm" to include every sensation you feel in your body, which means that rather than striving toward climax, you're tuning into all the delicious things you're feeling during an OM and, consequently, in every sexual encounter. When you do this, you realize there's a lot of fun stuff going on before you reach the finish line, and you feel less pressure to get there (which ironically makes you get there more quickly since everything feels so damn good).

Since OM is centered on the person with the clitoris, usually a woman, it's not about pleasing the other person. That's a big change for many women, since even when we're with partners who are considerate and care about our pleasure, we're socialized to please others, particularly men. During OMs, I noticed myself wanting to make sexy faces or noises or have sex afterward because I felt like I wasn't giving enough back, and I had to confront those feelings and realize they stemmed from the notion that women can't have pleasure for their own sake. I also became aware of some guilt that came up over taking 15 minutes just to myself. After my partner reassured me that he liked giving me the time and attention, I became more confident taking up time and attention in my extra-OM sex life too.

During sex, we have this barter system: "You do me, I do you." In OM, that goes away. Both people are supposed to get something out of OMing, even if it might look like it's for one person. Yes, it's centered on the "strokee"'s clitoris, but by giving that pleasure, the "stroker" has the ability to experience that pleasure vicariously, fine-tune their awareness, and become closer to their partner. While there is a form of OM practiced on males, it's usually not taught for several years because it leads people to fall into a "tit for tat" pattern where they feel pressure to reciprocate each other's OMs rather than both mutually appreciating each experience in of itself.

One requirement of OM is that the strokee gives detailed feedback throughout: "could I have a firmer stroke?", "a little to the left," etc. You have permission to say what you want without worrying it'll hurt your partner's ego. In my non-OM sex life, I'd often found myself thinking "I'd really like it a little more this way, but this is good enough, and I don't want to boss him around or make him feel unappreciated." But giving instructions in OM isn't about being selfish; it's about establishing the highest level of connection between the two partners as you can. When you think of it that way, a lot of guilt goes away.

The most challenging aspect of OM for me has been to remain authentic — to not make a noise just because I want my partner to keep doing something (though I don't think that's a bad thing all the time) or smile because I want him to feel appreciated or, again, try to look or sound sexy. I can't say I've mastered this skill, but it's one worth practicing, because once we strip away the shows we put on for our partners, we're left with only our own feelings, and no matter how out of tune we've been with them in the past, we're forced to feel them. And once we're in touch with our own feelings, we can share them with our partners.

6. It Fosters Love And Connection

I'm about to get hippie-dippie, but here goes. When I took the OM class, my classmates and I felt like friends within just a few minutes. We didn't actually OM there, but the community created by OM encourages the kinds of candid conversations that really bring people closer. And OM itself does this too. After our first time OMing, my partner and I said "I love you" and cuddled, and when we went out to dinner afterward, the conversation got deeper than it usually does. Nicole Daedone, who popularized OM, thinks it's because of the endorphins and bonding hormones it releases. Whatever it is, it works. I can't guarantee you'll be saying "I love you" to the first person you OM with, but if nothing else, you'll feel like you've shared a unique experience.