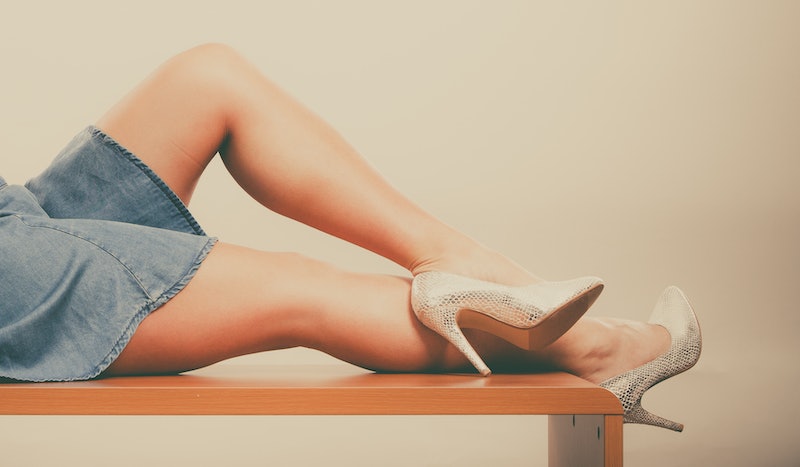 You often hear the term "objectification" to describe media depictions of women, but it also comes from a less expected source: women themselves. Over the course of their lives, there are many subtle ways women are taught to view themselves as objects. This internalized objectification can lead to low self-respect, body image issues, and lack of awareness of one's own autonomy.

While it may seem like objectification is something entirely separate from, say, wage inequality, it's really at the heart of a lot of feminist issues. If you look at misogyny in all its myriad forms, it usually comes back to the idea that women are objects, not subjects. By "object," I mean something that exists to fulfill someone else's desires, and by "subject," I mean somebody who has their own desires. Someone can be both an object and a subject — for example, you can be an object of your partner's affections, and they can be an object of yours, while both of you also remain your own subjects — but "objectification" specifically means reducing someone to complete objecthood.

If you are socialized as a woman, it is very likely that you have learned to view yourself as an object. Here are some subtle means by which our society marginalizes women and denies them their subjectivity.

The way we talk about dating and sex can be extremely objectifying without us even realizing it. Men encourage one another to "score" with women or "get it in," as if women are walking soccer goals or basketball hoops. Women are taught to play "hard to get," as if lack of consent were sexy, and when they do turn someone down, they're considered "teases," as if lack of respect for boundaries is just part of a fun game. These everyday phrases teach women that their role in relationships is as objects to be won, not people with needs to be met.

2. Through The Policing Of Their Sexuality

Encouraging women not to present themselves as sexual beings can be just as harmful as defining them solely by their sexuality. When we tell women not to wear revealing clothing because others might take it as an invitation, or not to go home with someone they don't intend to sleep with because they're sending the wrong message, we teach them that their bodies are to blame for anything bad that happens to them — rather than that if someone else decides to take their clothing or drunkenness or behavior as an invitation, that's on them. And by sending the message that what happens to their bodies is up to other people, we teach women that they are objects.

3. Through Criticism Of Their Bodies

When women hear their own bodies and the bodies of female celebrities and public figures criticized, they learn to obsess over appearances and to tie their appearance to their worth. Telling women that they're too fat to go to the beach, too ugly to be on TV, or too old to be in politics teaches them that their looks are about more than just looks and should be viewed as a metric of how many good things they deserve. This is obviously not the case — how you look and what you deserve are two entirely unrelated things — but the lesson is taught by our culture time and time again.

5. Through The Trivialization Of Sexual Misconduct

The way sexual assault, harassment, voyeurism, and other forms of misconduct are depicted in the media and discussed in real life gives off the impression that "boys will be boys," and that the actions of drunken college students are distinct from actual sexual misconduct. Or as Brock Turner's friend Leslie Rasmussen put it in her character letter to the judge, people believe there's "a woman getting kidnapped and raped as she is walking to her car in a parking lot," and that there are "idiot boys and girls having too much to drink and not being aware of their surroundings and having clouded judgement." This attitude makes women into objects by teaching them that violating their consent is not that big a deal.

Nudity can be freeing or empowering, but the way it is often used in the media represents a troubling power dynamic. Women are typically the ones being looked at, and men are typically the ones presumed to be looking. The majority of nudes in mainstream art museums are women, and movies with male nudity are more likely to get R ratings than those with female nudity. By assuming a heterosexual male viewer and catering the majority of content for that presumed heterosexual male viewer, TV and film send the message that straight men are the only people who exist — or at least, the only people whose desires matter. It also denies women their subjectivity by giving off the impression that straight women don't have pleasure to gain from looking, and it completely erases any of the many, many other sexualities that exist.

7. Through The Encouragement Of Unnecessary Beauty Rituals

First, a disclaimer: I have no problem with women who decide to undergo hair removal, plastic surgery, and other procedures aimed toward beauty. The problem isn't that beauty rituals exist; it's that women are constantly told that they must partake in them. Furthermore, it is telling that men are encouraged to do far less of this. For example, women are ridiculed for not shaving their legs, while men aren't even expected to put a razor anywhere near their legs (although of course they can, and many do — again, it's about societal expectations). The fact that we tell women they're "supposed" to wear makeup, remove body hair, or diet starting at a particular age sends the message that how their bodies look, feel, and smell to others is more important than how it feels for them to be in their own bodies. This can distance women from their own preferences and even from physical sensations like hunger and discomfort — they're taught to ignore them all in the name of one rigidly defined idea of "beauty."

8. Through The Prioritization Of Male Pleasure

In both the bedroom and other areas of life, women get the message that they exist to please men (straight men, specifically). The double standard girls learn for oral sex is one prime example. A recent study in the Journal of Sex Research found that both men and women think giving oral sex to a woman is a bigger deal, more difficult, and more distasteful than giving it to a man. Another study, in the Canadian Journal of Human Sexuality, found that the majority of college men, but not the majority of women, had received oral sex during their last hookup.

9. Through "Scientific" Ideas About Male And Female Sexuality

Many pop-psychology theories about male and female sexuality — men are more visual, women are more submissive, women are less sexual, etc. — are suspiciously similar to justifications for objectification. A lot of this science is dubious, and to the extent that legitimate findings confirm stereotypes, they could very well have been found due to socialization. Contrary to what society and some strains of science teach us, women can be visual, active, desirous, and, in short, all the things that make you a subject and not just an object. And we need to stop denying that.