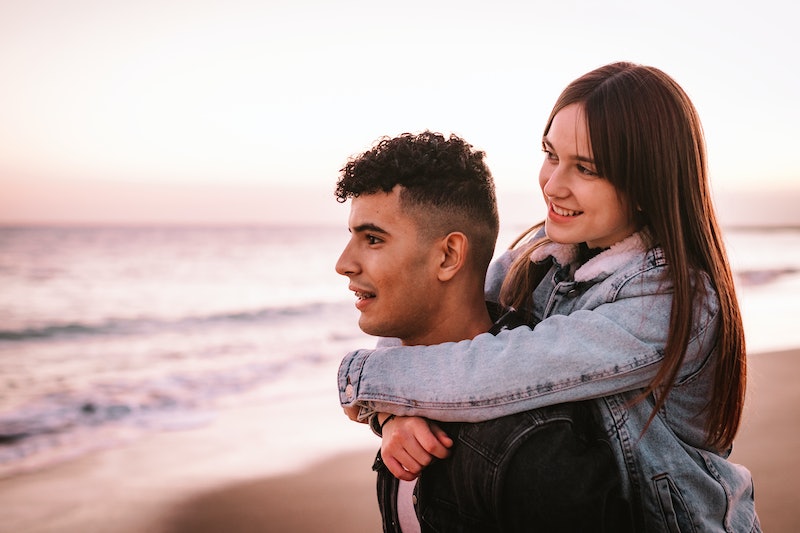 When I went to Ibiza with a good friend this summer, my goal was not to meet my next significant other. Sure, I was open to hookups, but I figured the chances anything serious could arise there were slim to none. But it turns out finding love on vacation is possible, y'all, because someone I met on that island five months ago is my boyfriend now. And we're not the only people who have been able to pull this off.

With several dating apps geared specifically toward meeting while traveling, it seems there's something about being in a new place that helps people connect. Maybe we feel a little bolder when nobody we know is around, or maybe we feel freer to be whoever we want when we're outside the setting we associate with our usual selves. Plus, people are becoming more open to meeting people who don't live in the same place as them. Technology has made long-distance relationships more feasible than ever, and the ability to work remotely has made it easier for long-distance partners to visit each other and potentially move.

A recent study by Topdeck Travel, a provider of group travel for 18-30 somethings, discovered that one in eight Millennial men hope to find their significant other while on vacation, while one in 20 women do.

Here are a few tips I'd give people who are also looking to meet their significant others on vacation.

I know it's a little contradictory to avoid expecting a relationship so that you can find one. But try going on your trip with the belief that if it happens, great, but if it doesn't, you'll still have a blast. If I had been on vacation looking for my next significant other, I might not have even been in the nightclub where I met my future boyfriend, since that's not your typical place to look, or had the carefree attitude that led me to approach him. In fact, I probably would've dismissed him over the fact that I lived in New York and he lived in Germany. When you have an open mind and aren't expecting anything, you subconsciously cast a wider net and end up meeting people in places you wouldn't normally look.

Even after you just have one conversation with someone, get their number or add them on Facebook. If I hadn't asked for my SO's contact info, we may not have ever met again. I almost didn't because I didn't think there was a point, but you never know what something might lead to, even if it's just a friendship. Maybe that person has a friend you'd hit it off with, and if you meet up with them later, you'll get to meet them too.

Life is too short to play games, and a vacation is way too short to play games. If you try to play hard to get or wait for someone else to make the first move, time will run out, and soon, you'll both be a on a plane, potentially having missed an opportunity. Sometimes you've got to be the brave one and risk rejection if you want the connection you formed at the pool or hotel bar to go somewhere.

If you have the time, take the person you're interested in on an actual date where you're vacationing. My SO and I went dancing together on the last night I spent there and then got ice cream right before I left, and it really made us start feeling like a couple already. Don't worry that you'll waste your vacation by spending too much time with one person. If you love spending time with them, that'll probably make the trip all the better.

When I left Ibiza, I was the biggest mess. We must've stood crying and hugging outside the cab that brought me to the airport for an hour. When he told me not to worry because we'd see each other again, I literally replied, "no, I don't think so." And I was wrong! So don't be like me! Don't lose hope! Communicate via email, Skype, WhatsApp, FaceTime, Google Hangouts, or whatever. Sometimes, just hearing from someone or seeing their face makes it seem far more real.

If might seem crazy for one of you to travel hundreds or thousands of miles for a second date, but there are no rules. I actually told my SO that I thought our relationship was probably just a vacation fling (once again, wrong!) but just had to test if it was something more, and that at the very least, he'd get to see New York and leave with some amazing memories. I thought asking him to come to New York would be way too demanding, especially since he can't work remotely, but I was wrong — he'd booked his ticket within a week of getting back to Germany. Even if you promise to meet again at some hypothetical point in the future, it won't really feel real until one of you gets a ticket, so don't overthink it.

7. Be Flexible About Your Location

These short visits can keep up for a while before anyone makes a commitment to move, but once you've established that you're serious, it does help for one or both of you to be open to relocating. I'm in a unique situation in that I work remotely and have no major responsibilities outside work, so spending two months in Germany was NBD for me. Of course, there were those voices in my head saying "you're essentially moving for a guy you met two months ago — that's cray," but is it really? If you're not losing anything, why not go live in another place for a while? You can only gain something from experiencing another culture.

When My SO and I go out dancing, we do this dorky thing where we recreate the night we met, asking each other what our names are and everything. We never plan it, but it inevitably comes out. I think it's our way of reminding ourselves how cool the way we met was. We always tell each other how lucky we feel to have been at that same club on that night. And the fact that we each traveled 4,000 miles for our second and third dates makes it even more special. From laying on the sand at Playa d'en Bossa to swimming at Coney Island and crossing the Williamsburg Bridge to strolling along the Rhine, we have incredible memories to look back on, and those memories make our relationship even more special today.

Finding love on vacation isn't all that uncommon, but it is unique, so treasure that uniqueness and never forget how awesome your love story is.