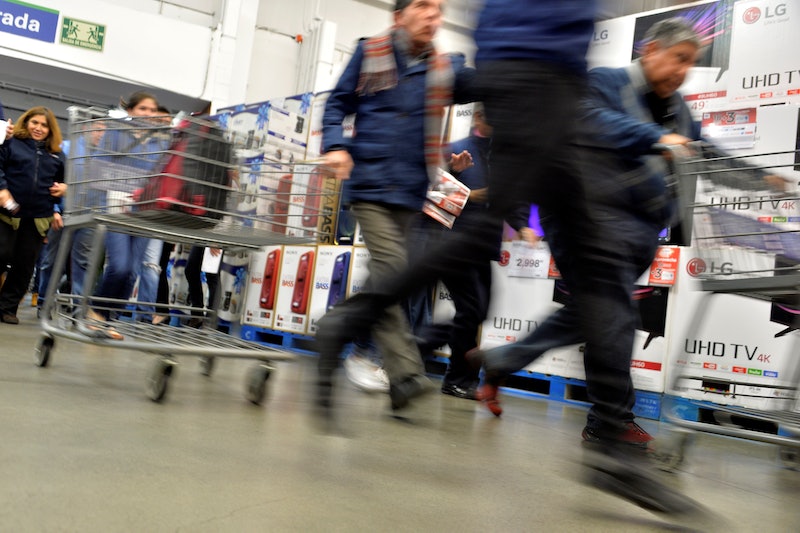 When you think of Black Friday, two things probably immediately come to mind: big sales and even bigger crowds. But have you ever wondered how Black Friday begin? The annual shopping event actually has a pretty interesting history behind it.

As you know, Black Friday occurs the day after Thanksgiving, and has long been regarded as the start of the Christmas shopping season. Major retailers all across the country offer some of their biggest discounts and promos of the year, in addition to opening early (and perhaps even remaining open overnight) to allow customers to take advantage of the sales. But how did the unofficial holiday come to be in the first place?

Turns out, according to USA Today, it started in 1939, when Franklin D. Roosevelt was pressured to move Thanksgiving up from the last Thursday in November to penultimate Thursday of the month — solely for the purpose of expanding the Christmas shopping season. The idea was that the longer the sales were around, the more people would spend, and the then-failing economy would receive a much-needed boost. The change in Thanksgiving's date was made official in 1941, but the term "Black Friday" didn't pop up until about a decade later. In fact, according to CNN, the name Black Friday originated in Philadelphia: In the '50s, local police used the term to describe the Friday after Thanksgiving because it was a day that proved to be especially difficult for them due to the masses of shoppers that came into the city from the suburbs. The name caught on in other cities and has since stuck around, despite retailers' efforts to change the name to "Big Friday" in the '60s.

So, there you have it. The annual event actually has a surprisingly complex background, although its meaning hasn't changed much since. Decades later, and Black Friday is still equated with huge discounts, long chaotic lines, and big spending, just as it did back in the day. And given 2016's major sales, I think it's safe to say that 2016's Black Friday won't stray from tradition. So to all those participating in the sales extravaganza this month, good luck and happy shopping!