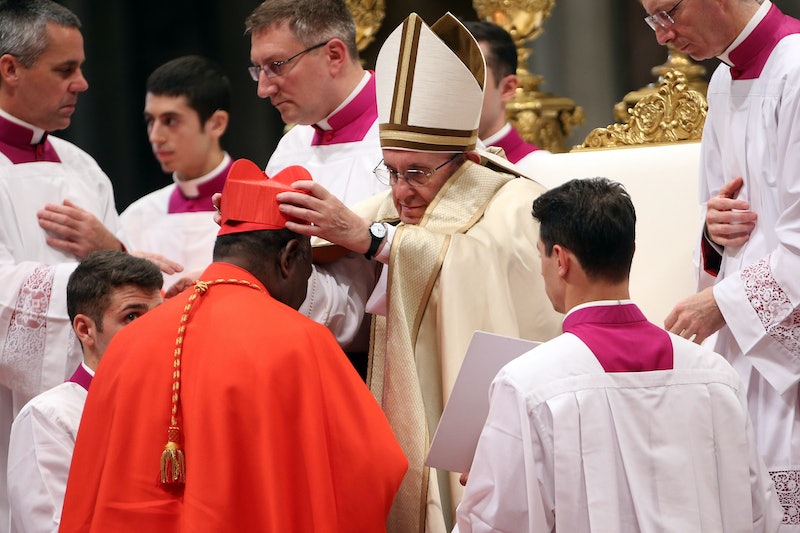 In the midst of the protests, angry tweets, and fear that has come out of the U.S. since the presidential election earlier this month, a beacon of diversity has appeared in one of the most unlikely of places: the Catholic Church. On Saturday, Church leader Pope Francis appointed 17 new cardinals in a move that could bring Catholic populations around the world together like never before. The new cardinals come from diverse regions and backgrounds, and they could guide the Church to a more welcoming future.

If Pope Francis is the president of the Catholic Church, then the cardinals are his Cabinet. They oversee the Church's work around the world and manage many of the pope's programs. Eventually, they'll elect the next pope, probably from their own ranks. In other words, cardinals have a lot of power in the Church's operations and its future.

It's that power that makes Pope Francis' most recent appointments so significant. His newest cardinals include 49-year-old Dieudonne Nzapalainga from the Central African Republic. As CNN reported, Nzapalainga has become known for his work to bridge the gap between Christians and Muslims in the country, as tensions between the two groups has led to years of violent conflict. Another new cardinal, John Ribat, hails from Papua New Guinea and has championed the cause of climate change within the Church.

In appointing these cardinals and others, Pope Francis has continued the mission that has helped him gain the appreciation of Catholics, including myself, around the world. His papacy has done wonders to modernize the Church, taking it from an intimidating, close-minded organization to an institution that, for the most part, recognizes climate change, forgives abortion, and accepts members of the LGBTQ community. The pope has brought these forward-thinking members of the Church to its core, and with his new appointments, he has elevated them to positions of power.

It's important to note that the pope hasn't made all of this progress on his own. Just as the cardinals he appointed on Saturday will help to choose Francis' successor, he was elected to the Vatican by a group of cardinals that believed in his ideals. Now, it seems that a snowball effect has taken place, with Pope Francis ensuring his progressive (for the Church) ideals remain intact even when his papacy ends.

The pope's newest cardinals represent perhaps as diverse a group of Catholic leaders as you could find. They want to see the Church make progress on issues like climate change, the conflict in Syria, and Christian-Muslim relations. During Saturday's official ceremony, their diverse voices and perspectives were publicly welcomed into the Church's leadership. It was a good day for the Vatican.

Meanwhile, on Saturday in the U.S., anti-Donald Trump protestors reportedly clashed violently with white nationalists in the nation's capital. The president-elect criticized the cast of Broadway's Hamilton for speaking out in support of "the diverse America."

It's not hard to see the contrast between the pope's appointments and Trump's own recent appointments. So far, Trump's Cabinet is filled with conservative white men, including Alabama's Jeff Sessions, whose racially charged comments from 30 years ago previously cost him a job in the federal government, and Steve Bannon, who previously ran a website that said "Birth Control Makes Women Unattractive And Crazy." While the pope's leadership is getting more diverse, it would seem that the future president's leadership is getting dramatically less so.

The pope himself seemed to comment on the situation in the U.S. Speaking on Saturday during the appointment ceremony, Pope Francis said, "We live at a time in which polarization and exclusion are burgeoning and considered the only way to resolve conflicts." According to the BBC, he cautioned against those who want to "raise walls, build barriers, and label people."

The Catholic Church's latest development should serve as a reminder to followers and non-followers alike that it's always better to embrace diversity than to criticize it. In the coming months, Americans on both sides of the aisle may have to come to terms with voices and policies they don't want to hear. When that's the case, to pope's advice to refrain from building barriers and labeling people should remain top of mind.