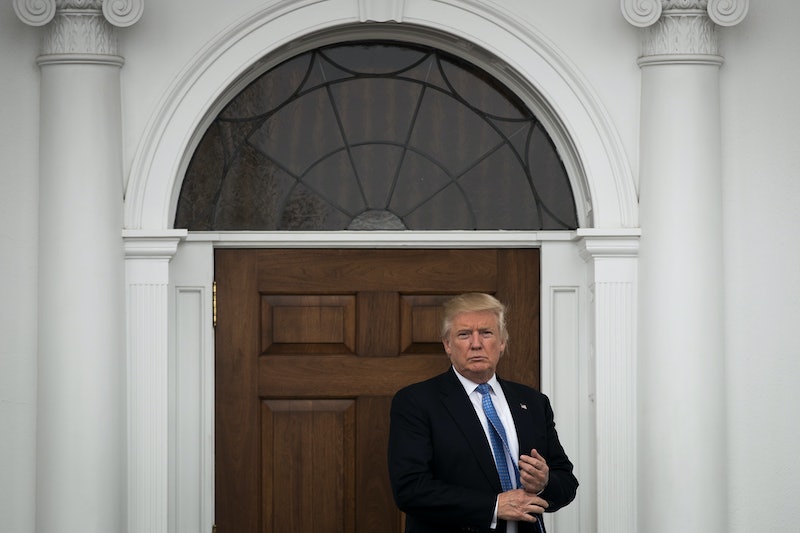 A meeting last week between President-elect Donald Trump and several of his Indian business partners has troubling implications for Trump's self-stated blind business trust. Atul Chordia, Sagar Chordia, and Kalpesh Mehta met with the future president in Trump Tower last Tuesday, but significantly different versions of events have been floated by the two parties involved. Trump's team isn't denying that the meeting took place, just that the four businessmen talked about their business matters. “It was not a formal meeting of any kind,” Breanna Butler, a Trump Organization spokeswoman, told The New York Times.

However, according to The Economic Times of India, "the discussion revolved around Indian economy and [Prime Minister Narendra] Modi." Mehta, managing partner at Tribeca Developers, the Trump Organization’s exclusive representative in India, summed up Trump's extensive dealings in the developing country for another publication, Housebolo News. "Trump has five ongoing deals in India with a gross development value of about $1.5 billion. Sales have begun in two projects and one of those projects has already been delivered. Three more projects are likely to be launched in 2017,” said Mehta.

If The Economic Times and Housebolo have the correct version of events, this is a clear violation of the blind trust that Trump promised to instate upon his election.

Although the news was met with outrage from many Americans, Trump's meeting didn't technically violate any laws. According to Politifact, Title 18 Section 208 of the U.S. code says that presidents and vice presidents are exempt from having to put your financial interests in a blind trust upon employment by the Executive Branch. All Trump is legally required to do is disclose his finances, but that information doesn't even have to be as detailed as his tax returns.

But the operative word here is trust, something that Trump doesn't seem to be working hard to build with the millions of Americans who oppose his presidency. Although there was already ethical concern about the way that Trump promised to set up this blind trust, by handing over control to his children, it seems he could still have direct involvement in his business, which could lead to a violation of the Constitution's emoluments clause.

This meeting sets a really concerning precedent for the next four years for several reasons. There's the hypocrisy, for starters — Trump relentlessly accused Hillary Clinton of corruption during the campaign, yet before he's even in office, he's engaging in questionable business meetings. Second, there's the hours in the day. Being president is a more than full-time job, and if Trump spends any of it focusing on his own interests, he'll be critically failing the American people.

Last, but definitely, not least, there's the natural extension of this scenario to other morally and legally gray areas. Outside of the emoluments clause, there's basically no guarantee or safeguard against Trump using the presidency for his own gain, so he could continue to make money. Trump has pretty consistently shown that he's only looking out for himself, and definitely not for the little guy, so if this meeting was the beginning of a four-year-long pattern, the country could be in some serious trouble.