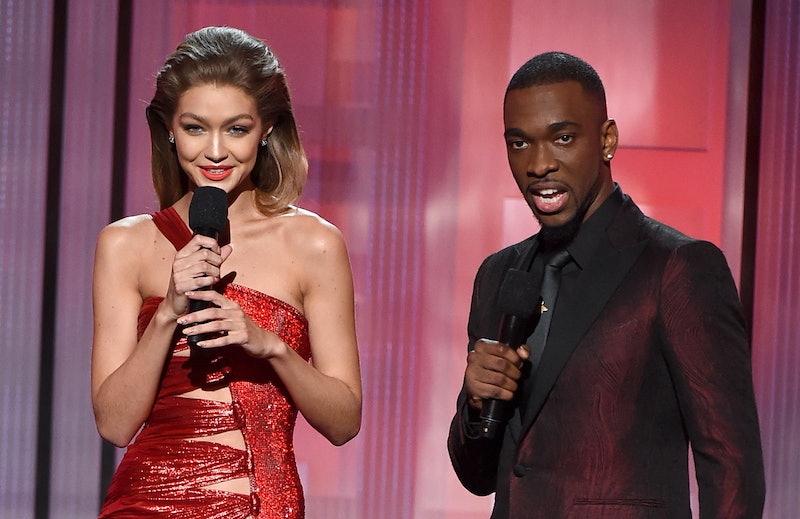 It's the first time she's hosted an awards ceremony but damn, Gigi Hadid's AMAs opening monologue was fire. After gushing about her boyfriend, Zayn Malik, on the red carpet, Hadid was able to get in some iconic digs during the American Music Awards opening with co-host Jay Pharoah. Her nerves wore off quickly after the introductory Bruno Mars performance, and, as she rolled up to the main stage with Pharoah, it became evident that she was ready to take the spotlight. What followed were some very quick and sharp jabs at the Electoral College, Meek Mill, and Melania Trump. Who knew Hadid was not only a natural-born comedian, but also fearless enough to take on some political topics? Get it, girl. Update: Hadid issued a statement on her Twitter account apologizing to anyone she offended with her impression of Trump.

Earlier: After Pharoah put an emphasis on the fact that the voting tonight was done by the people, who cast "millions of votes," Hadid was quick to chime in: "But don't worry tonight, guys. We don't have to deal with the Electoral College." Oh, sick burn, Hadid. Didn't know you had it in you. And, sure, that may have been a scripted line but damn, did it sting or did it sting?

She wasn't done, though. After Pharoah was quick to pull out a mildly humorous Jay Z impression (he's got Jay Z down pat), Hadid eagerly told Pharoah that she had been working on an amazing impression of her own. Clearly surprised, he asked her to show him what she had up her sleeve. Quickly pinching her face and putting on a very thick, Melania Trump-like voice, she wheezed, "I love my husband, President Barack Obama, and our children, Sasha and Malia." This was a clear dig at the ongoing joke that Melania Trump stole portions of a speech from Michelle Obama (or rather, that portions of her speech sounded remarkably similar to one that Mobama had given years before).

The crowd went absolutely wild, and, in that one moment, it became clear that Hadid was the true star of the 2016 American Music Awards. Truly iconic stuff.