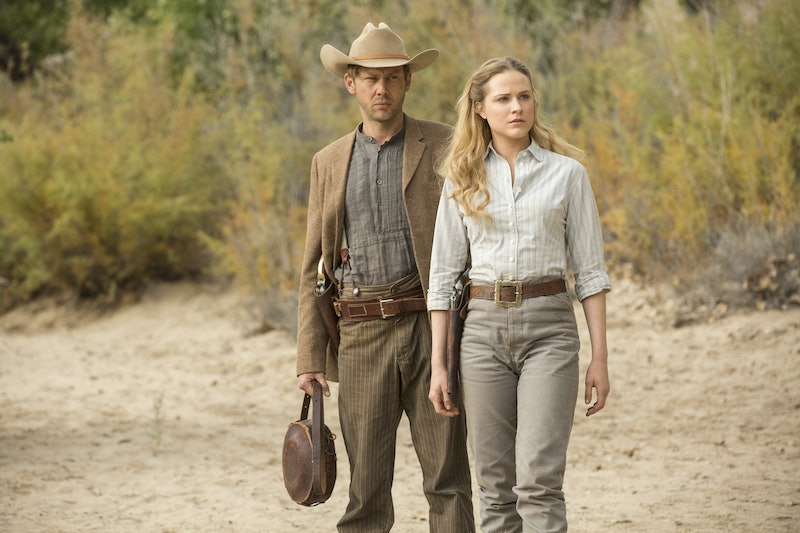 Since the show premiered last month, countless articles and blogs and videos have been devoted to Westworld fan theories; including that Bernard is a host (true!), that Westworld the park is in outer space (probably not!), and that dashing hero William is actually the same person as the villainous Man In Black. It's that latter theory that also gave rise to perhaps the most prominent of all fan theories about the new HBO drama: that the entire series is deceptively taking place in two timelines at once — one in the "present" and one 30 years in the past. However, this week's episode, "Trace Decay," may have finally debunked that theory… but not in the way you might have expected.

Interestingly, the clue came not from William or his host companion Dolores, but from Maeve, the Sweetwater madam who has been steadily gaining in sentience over the past few weeks. When she once again experienced a vivid flashback to the time of her life when she lived on a farmstead with her daughter, she asked programmers Felix and Sylvester what was happening to her. They explained that hosts don't experience memory the same way humans do. While past events gradually become hazy for you and me, the park's robots (since they're basically supercomputers) are able to recall past events in perfect detail — as though they're experiencing them all over again.

On a show where no single line of dialogue is accidental or unimportant, this seems an almost blatant explanation for what is happening with Westworld's seemingly bifurcated timelines. There is actually only one. What's really happening isn't simply sleight-of-hand editing to hide three-decade-long time jumps; the truth is much simpler than that. Memory.

Dolores isn't existing in a storyline separated from the rest of the show by a 30-year gap. She is in the same "present" timeline as every other character on the show, and she is currently making her way towards the town with the buried church on the edges of the park, just like we've seen. But almost everything that's happening around Dolores is simply her supercomputer mind perfectly remembering something that happened to her in the past.

This explains the continued presence of occasional "glitches" — like a gun that's there one moment and gone the next, or Dolores hallucinating the Man In Black shortly before she runs into William, or Dolores watching herself march in a parade through Pariah. These are the moments in which the host's mind is toggling between past and present, between reality and memory. Indeed, the very first time we see Dolores after the aforementioned scene with Maeve, she experiences one of these glitches. While getting water from a creek for William and a dying soldier, she turns around — and suddenly everyone's gone and she's standing there alone. In the next moment, William has rematerialized; because, just for a second, Dolores' mind snapped out of its recollection and into the present, where William doesn't exist. (Or where he does exist… but only as the Man In Black.)

Dolores herself practically confirms as much. After she experiences yet another one of these temporal glitches upon entering the town with the buried church, she tells William, "It's like I'm trapped in a memory of a life long ago." She may have been referring to the vision she just had of a bloody massacre — but the real memory she's trapped in is the one in which she's having a conversation with William.

When will Dolores realize her mind is playing tricks on her, and that she has embarked on her quest alone? With only two episodes left in the season, answers should be coming fast and furious now.