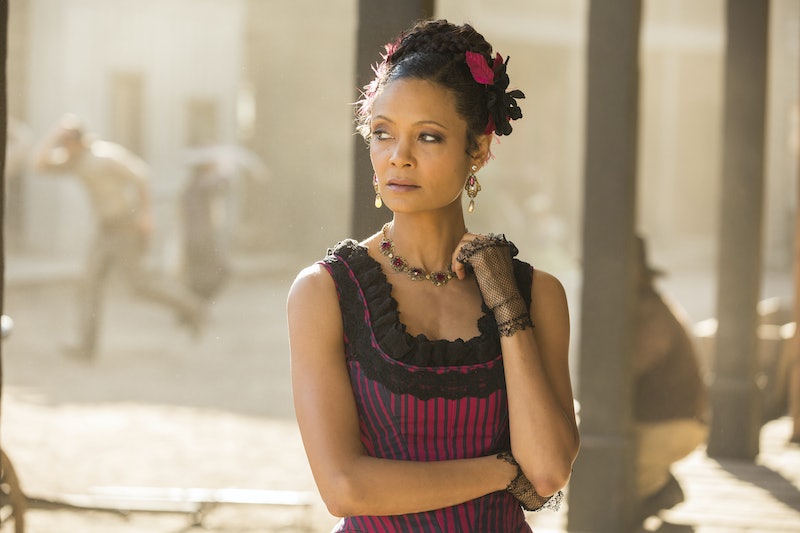 All credit to Evan Rachel Wood and her damsel-defying performance as Dolores Abernathy, but Thandie Newton's Maeve on Westworld has slowly emerged as the best — and strongest — character in the new HBO drama. Last week, Sweetwater's madam declared her intention to escape from the park for good; on this week's episode, "Trace Decay," we got to see her plan in action… and woe betide anyone who gets in her way.

For several episodes, fans have been wondering why hapless "butchers" Felix and Sylvester were allowing themselves to be manipulated by Maeve and why they didn't simply shut the unruly host down. As if in answer, this week we got to see them try exactly that. Well, Sylvester tried it; coming up with a plan to wipe Maeve clean while she was "under" getting her code rewritten. But the fly in the ointment was Felix, who sees too much of a spark of life in Maeve and simply couldn't find it in himself to push a button and effectively kill her.

So while Sylvester thought Felix was wiping the host's brain, he was actually reconfiguring her core code — which she was more than happy to show off as soon as she awoke, grabbing a scalpel and slitting Sylvester's throat. Thanks to a handy tool that the butchers use to repair damaged hosts, Felix was able to stitch up Sylvester's neck before he bled out… but we have now officially seen the first (attempted) murder of a human by a robot. (No, Bernard killing Theresa doesn't count, since Ford made him do it; he was just a human's tool, not acting of his own accord.)

Even with her attributes increased and her core code rewritten, Maeve will still find it hard to escape from Westworld without help. Which is why she declared her intention to recruit an army to help her fight against Delos. We quickly learned how she planned to do this. Apparently, Felix's code rewrite didn't just allow Maeve to kill humans; it also gave her the ability to essentially "write" other hosts' storylines for them in real time. All she has to do is go up to another host, narrate what they're about to do, and they'll do it. Maeve is now basically an über-host who can control other hosts just by speaking to them.

I'm not sure exactly how this plot is going to play out over the season's final two episodes, but I for one can't wait to see Maeve leading a rebellion against Delos at the head of a robot army. Westworld may have started out at a slower pace, but things certainly look like they're heading for an explosive finale.