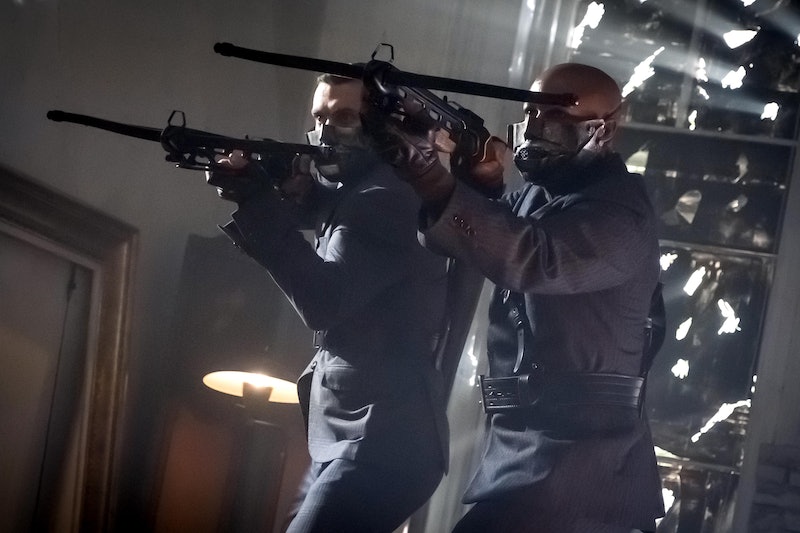 After dozens of teases, Gotham finally confirmed what fans had already suspected for ages: the mysterious secret society that's been toying with Bruce for years is The Court of Owls. Sure, all of the owl motifs were a clue, but when the head of the Whisper Gang actually said it, it felt like sweet, sweet vindication. But when one mystery is solved, another opens, and know we need to know what the Whisper Gang is on Gotham . At first, Bruce, Ivy, and Selina thought that these crossbow-wielding bad guys were working for the Court. But as it turns out, the Whisper Gang actually hates the Court of Owls, because in addition to being an evil group of super-wealthy Gothamites behind some truly terrible things (like the experiments at Indian Hill), they also don't hold up their contracts.

The Whisper Gang was attempting to use their smuggling skills to find secret keys that open a "safe" that has something inside that would help the gang destroy the Court. But before they can use the key Ivy found in the mansion, the Whisper Gang is destroyed and murdered by a masked assassin who proves more deadly than even this group of trained criminals. The masked killer could be a member of the "Talons," the trained soldiers who do the bidding of the Court of Owls in DC Comics. It's worth noting that a group called the Whisper Gang also appears in the comics, where they are a branch of the Ukrainian mob that operates in Gotham City.

Right now, that piece of their backstory doesn't seem particularly relevant to the plot of Gotham, which is shifting focus back to the Falcone family. The Nov. 21 episode also revealed that Don Falcone's son, Mario, is a target of the Court, and even his dad doesn't know why. Could it have something to do with Mario having the Alice Tetch blood virus? That doesn't seem right, since it seemed more like Mario had some kind of longstanding problem with the Court, and the virus develops quickly. I'd bet something more like significant debts of some kind or perhaps a connection to his medical work. After all, Hugo Strange was blackmailed into remaining a pawn of the Court because he was doing highly illegal medical experiments on humans. Might Mario be doing something similar without his dad's knowledge?

Regardless of what caused the Court of Owls to attack Mario, it was only a hefty promise from his father that dissuaded Kathryn from continuing the assault. And with the masked killer who could take out a whole group of gangsters at their beck and call, the Court of Owls could easily take out Mario, Falcone, or anyone else who tries to get in their way.