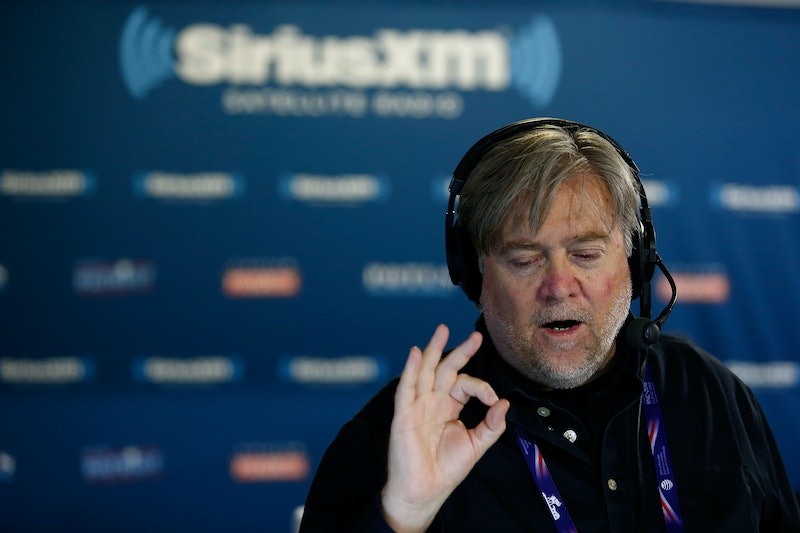 After taking a wait-and-see attitude with Donald Trump, the selection of Steve Bannon as his chief strategist has much of the country up in arms, and rightly so. Since Bannon became the head of Breitbart news, the site has been accused of covering the news with an antisemitic, racist, and sexist slant, with headlines like "There's No Hiring Bias Against Women In Tech, They Just Suck at Interviews" and "Data: Young Muslims In The West Are A Ticking Time Bomb." Despite the outrage — or perhaps because of it — Trump is keeping Bannon on. So who would work with Bannon?

To understand that, it's important to get a full picture of what Bannon's role within the administration will be. He's not a part of the cabinet, like Reince Priebus, who will be Trump's chief of staff, and thus he has a lot of leeway about what his own role will be like in the Trump Administration — similarly to other senior advisers that have worked in the White House since arguably FDR.

Obama has had a number of such advisors, including David Axelrod, David Plouffe, and David Pfeiffer. Of course, Bannon and Trump may do things differently, but in the Obama White House, the job was explained by The New York Times to be "equal parts counselor, confidant, strategist and truth-teller." It will be interesting to see to what extent Bannon is separate from Priebus. Since the two were announced together, it created two power centers in the White House, and they are likely to butt heads on plenty of issues.

The Times reported that this is how Trump has organized the power structure of his businesses — always having rivals underneath him who then battle it out to get their priorities and plans to become Trump's. That means that Bannon will probably want to create his own smaller circle of like-minded political thinkers (yes, you could read that as other alt-righters), who he can count on to make his arguments the most enticing to President Trump (potentially at the expense of Priebus and his team).

At Breitbart, the management seemed to reward people who were supporters of Trump — especially after one of the website's reporters accused Trump's campaign manager, Corey Lewandowski, of grabbing her arm (all criminal charges against him were dropped). Back in January, Bannon himself described the site as "the Fight Club" — something that could be telling if he were to carry that kind of environment over when he tries to build his team within the administration.

How exactly that would work is more of a mystery, given that the website was known for being so anti-establishment. "We say Paul Ryan was grown in a petri dish at the Heritage Foundation," Bannon told The Washington Post in January, for example. So now that Bannon has the reins, the game plan might need to change. Bannon will need people on his side to push through his agenda with Trump, but how he'll do so is still left to be seen.