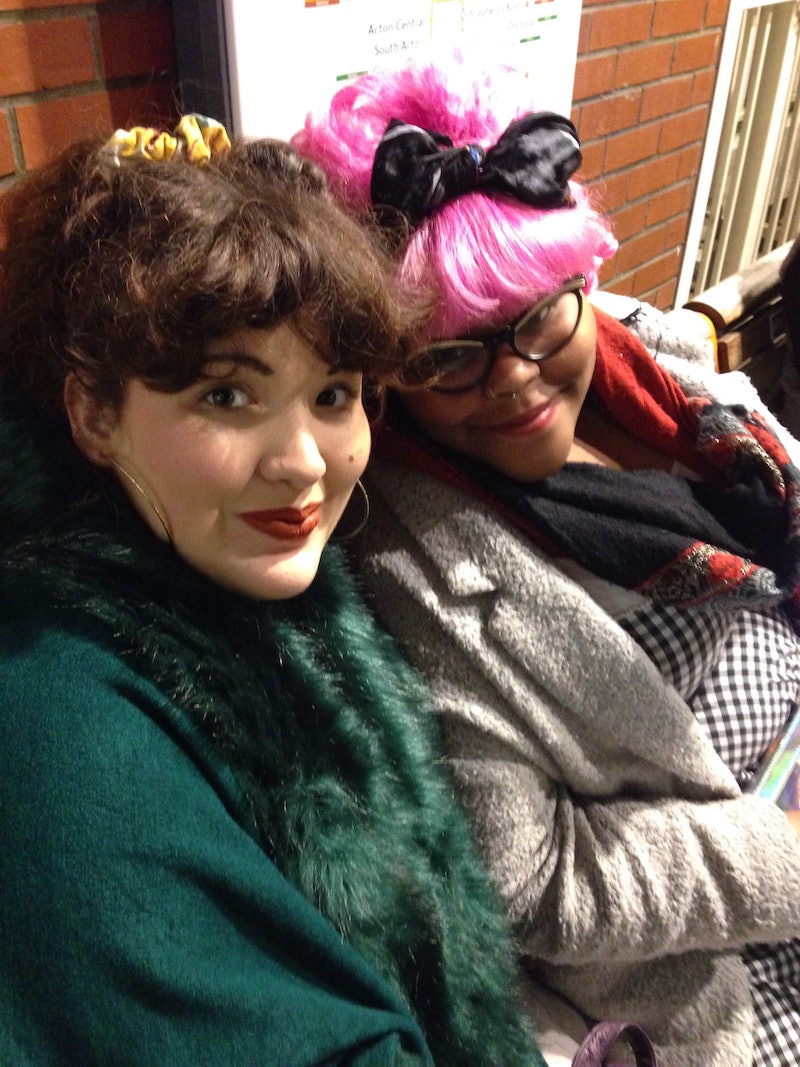 The first time I emailed Ragini Nag Rao, I felt like a fangirl. Butterflies invaded my stomach as I tried to find the words to tell the plus size blogger how much her posts had touched me: Posts about the intersection of dieting and privilege or growing up fat in a third world country, all alongside #OOTDs that blended kitschy, schoolboy, and vintage details into one of the most unique style aesthetics I'd ever seen rocked by a plus size woman.

A few emails later, I found myself divulging some of the most personal details of my life — the rockiest, messiest moments of childhood and adolescence — as she did much the same. A few emails later still, and I felt certain that I had a new friend: Someone who'd be there, thousands of miles away and at the other end of a computer screen, should ever I need her.

It's a trajectory of events that I've experienced a few times since. So inspired by a self-identified fat activist or plus size blogger online, I've reached out in raw and open fashion (unless they beat me to it). A couple of sentences in an email evolve into a couple of paragraphs, which then evolve into a close relationship maintained through WhatsApp, Facebook, Twitter, Instagram, Skype, and iMessage, or some combination of the many communication tools a smartphone can offer you. My relationships with many fat women of the web have never moved beyond the screen, while those that have are usually limited to a few precious hours of connection while one of us is in the other's city. And yet, they've been the most important friendships of my life. They've been the ones that have saved me.

Growing up, I was always drawn to other fat girls. Looking back at the years between nine and 19, three friends stand out as the ones who most shaped my youth. And they were all fat, like me.

There's a lot to be said for finding relatability in another human when so much of the world tries to other you. If my peers, my teachers, and my relatives were going to insist that I was damaged for having flabby arms and a non-flat stomach, then it was up to me to find safe spaces. At the time, those safe spaces looked a lot like young women going through the same sh*t: The ones who understood ridicule; who knew what it was like for your crush to announce what a pig or donkey or cow you were to the rest of the class; who knew what it was like to be called "fat" with vitriol and disappointment.

Unfortunately, neither these girls nor I had ever been presented with the idea of fatness as something with the potential for neutrality, let alone positivity. More than bonding over our body types, we seemingly bonded over our self-loathing insecurity: The kind that made us certain we'd never find love, that made us join forces in dieting and weight loss attempts, and that made us feel like we weren't alone when calorie counting took over our lives.

All of us also ended up struggling through eating disorders; and sadly, we inadvertently enabled one another by dishing out a hearty "congrats" after someone ate only 400 calories in a day, or following a weigh-in that revealed a few pounds lost after spending the previous morning on the treadmill until another's toes were bleeding. It's not that we wished for each other's suffering or pain. We'd all just been so conditioned to believe that fatness was deplorable that, as friends, we wanted to help each other find the thinness we were so sure would make everything better and brighter.

I often find myself wondering how different our time together would have been had we grown up alongside feminist literature and fat positive activism. Would we have hated ourselves less? Would we have been able to analyze fatphobia and place the blame of the things we were going through onto the people and social constructs making us feel ugly or undisciplined or unsightly, rather than placing it onto our bodies? Would we have lifted each other up, rather than helped each other stay down?

It's my present friendships with fat women online that make me think an introduction to size acceptance rhetoric would've made all the difference. While I'm certain that my experiences with my young, fat friends don't mirror all experiences between young, fat friends, I don't doubt that being surrounded by people who adamantly dislike themselves can have toxic repercussions for all parties.

And therein lies the crucial difference between the plus size women I've cultivated friendships with online and my high school besties. The latter had never known an alternative narrative to hating your body for being fat. The former, however, have crafted platforms, careers, hobbies, and entire lives out of deconstructing tropes of aspirational beauty and loving themselves (every single roll and stretch mark and alleged flaw included) as an act of radicalism and rebellion. Without getting to know these women — fat women unafraid of owning their refusal to shrink in size and presence alike — I don't know that I would've embraced radicalism and rebellion for myself so that I, too, could find a platform, a career I love, a body I can have fun with, and a voice I can share.

Much is often said and written about the "vapidity" of the internet and the side effects Generations Y and Z will face as a result of our dependency on it. Every so often, a scaremongering headline like "Too Much Internet Use 'Can Damage Teenagers' Brains'" surfaces while studies reveal that we now have a "thirst for instant gratification, settle for quick choices, and lack patience," thanks to our hyper-connectivity. Plus, there's always that one relative in their 70s or 80s who still refuses to try the internet and suggests to you that young people today have shallow interests for always being on their iPhones. Hi dad.

So when I tell some people that my best friends are largely individuals whom I've never met (or who I've only had the pleasure of interacting with a few times face-to-face), I'm typically met with confusion and skepticism. It's not unlike the shade that was thrown my way when my now-husband and I first started dating. Though we had met once in the flesh, our relationship was preserved principally through Skype for two years while I finished college in America and he studied in the U.K. We were asked how our love could be "real" with so little "actual" engagement. We were asked how we could really know each other, because there's no way a five-hour Skype conversation could be as legitimate as a five-hour conversation over pizza and beer. We were told that you can never really trust someone who you rarely ever see.

Maybe much can be mocked when it comes to the internet and our reliance on social media that is sometimes misconstrued as a rejection of authentic connection. But I'd argue that the internet and social media have brought people together in more ways than one. Had it not been for sites like Blogger, Wordpress, Tumblr, and Live Journal, many of the most fearless voices in fat activism wouldn't have had their first platform. Had it not been for Twitter and Instagram, they wouldn't have then been able to connect with individuals the world over who finally felt represented and seen thanks to their words.

That's certainly how I feel when I think of the friends I've made online: By refusing to not-be-seen in their fatness, they've encouraged me to allow myself to be seen. By normalizing and celebrating their bodies, they've allowed me to recognize that I deserve to do the same. By deconstructing diet culture and talking openly about intersectionalism and wearing crop tops and bikinis, they've made it clear that living life loudly, boldly, and freely needn't be put on hold until you achieve someone else's definition of beauty. They've allowed me to reject "the thin woman within" and be satisfied with the fat woman not-within.

There is indeed a lot to be said for finding relatability in people when your body is othered. But perhaps relatability based on aesthetics alone is not enough. Although I deeply thank the fat girls I grew up with for making me feel less alone in the moment, I cannot thank them for helping me see past my body or allowing me to educate myself on the realities of cultural fatantagonism. It was my online friends who did that.

They provided me with a re-education, and their lesson plans have allowed me to better love myself and others in the process. Their emails and texts have been a source of strength when there's been none to be found IRL. Their voices have emboldened me. Their stories have helped me make sense of mine. And their ownership of their bodies have allowed me to get to know my own.