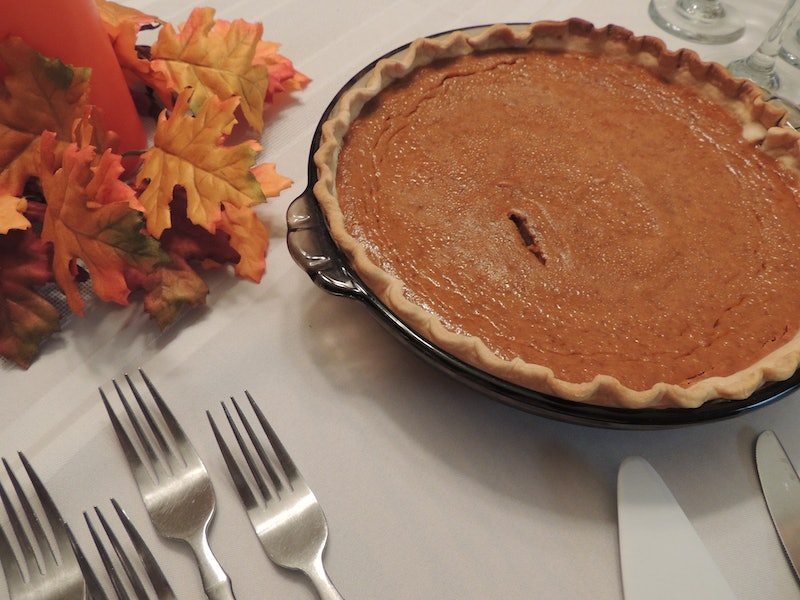 Ever since I made pumpkin bisque a few weeks ago to celebrate autumn (my first time making soup ever), I have felt like I can cook or bake practically anything in the kitchen, particularly quirky versions of fall classics. Recently, I've been especially curious about how how pilgrims made pumpkin pie back in the old days, because let's face it: The holidays have a rich history that I feel like we don't appreciate nearly as much as we should.

According to a new how-to video called "Thanksgiving Pumpkin Pie - The ORIGINAL Recipe," however, it turns out that making traditional pumpkin pie is a bit more complicated than you might think. Part of an ongoing collaboration between YouTube channel "How Does It Grow?" and the TODAY show, the video provides a provides a visual recipe guide for preparing "custard-filled pie pumpkin." It's basically a pumpkin pie that's been turned from the inside out, which video host Nicole Jolly calls "pie in a pumpkin" (you'll see what that means exactly in just a second). But is that really how pilgrims made pumpkin pie originally?

As most of us know, pumpkin pie has been a Thanksgiving (and all-around fall) staple for decades. It's true that pilgrims didn't actually make a pie crust, which makes sense; it's not like they had access to fancy kitchen appliances like ovens, and things like butter and flour would have been in short supply. It seems as though the pilgrims in the mid-1600s preferred to boil, roast, or stew the pumpkin instead — and it's also worth noting that Native Americans were the ones who taught pilgrims how to grow pumpkins and use them for survival in the first place, of course. There is also some general speculation that pilgrims in the mid-1600s used pumpkins like edible bowls, emptying them out and filling it up with ingredients like milk and honey to make a custard.

Over time, variations of pumpkin pie cropped up in cookbooks like The Queen-like Closet by Hannah Wooley (1670), with recipes that called for dipping pumpkin slices into egg, frying them, and then laying them in a pie, or making pumpkin puddings that were baked into a crust. Eventually, pumpkin pie — along with turkey and stuffing — became a popular dish during the holidays.

Thus, in truth, the way we make pumpkin pie today is nothing like the pilgrims' version of pumpkin pie. The latter also doesn't look anything like a modern pumpkin pie. Perhaps that's what makes it so fun to make (and eat!). Regardless, it's fascinating to know how classic dishes were developed and how the holidays were celebrated back when technology was comparatively primitive. Without further ado, here's a guide for making pilgrim-style pumpkin pie, according to the "How Does It Grow?" video:

First, pick a pumpkin that's ideal for making pies (this video explains more about "pie pumpkins," but generally these pumpkins are tan-colored rather than orange). Cut the top off of your chosen pumpkin and clean out the insides. Using a large spoon, make sure all the slimy stuff, including the seeds, is taken out. (Bonus tip: Pumpkin guts make for a fine face mask.) Then, cover the pumpkin with a loose sheet of tin foil. Bake the pumpkin until it's tender. For reference, a 15-pound pumpkin needs to bake for around two hours at 400 degrees before it's pie-ready.

While your pumpkin bakes in the oven, start working on that custard. Whisk together eggs, brown sugar, pumpkin pie spice, and evaporated milk until all the ingredients are well-combined.

Here comes the really fun part. Take your pumpkin out of the oven and scoop out any excess liquid with a spoon. Pour the custard mixture into the pumpkin. Bake at 350 degrees for about an hour. During this time, the custard should become firm inside the pumpkin.

And there you have it! Although we'll never really know how pilgrims ate their pumpkin pie (or pies-in-a-pumpkin), this is probably as close as we're gonna get. That's good enough for me!