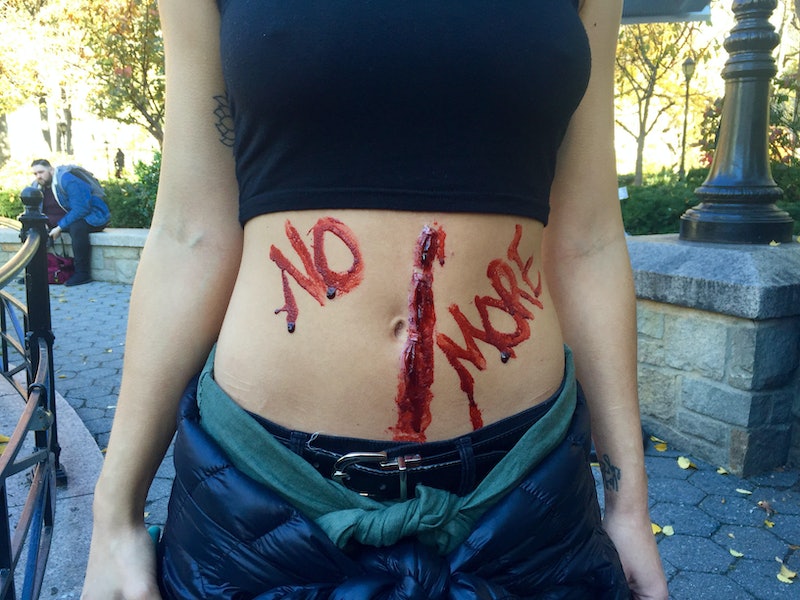 During an afternoon that was remarkably sunny for November in New York City, several dozen people were congregating in a large holiday market, carrying posters, markers, Halloween makeup kits, and fake blood. They were waiting for an anti-Donald-Trump protest in New York City to start, one of many over the last couple of weeks since Trump won the presidential election.

Over the last year, I've reported on the ground at several rallies for Black Lives Matter, in support of Syrian refugees, and against Trump. Every protest has a different personality. Some are angry and unapologetic, others emphasize safe spaces, and still others embody an untouchable aura that only comes from having a vast array of individuals headed toward the same place, both symbolically and geographically.

Around 100 people showed up to march at the beginning of this particular rally, called "TRUMP PROTEST: We Are All Affected," according to Willa Cowan-Essig, the protest's organizer. The protesters, looked solemn but determined as they waited their turn for Cowan-Essig to paint fake wounds on their bodies, one by one. Each protester could choose what "fake wounds" they wanted, from a black eye to C-section scars to simply oozing blood.

Once everyone had had their fake wounds painted on, the protesters began to make their way toward Trump Tower. Although the crowd waned throughout the afternoon, they soon joined forces with a separate anti-Trump protest that had begun in a different part of the city.

This demonstration was originally supposed to be a nude protest, but most went in their undergarments, their fake wounds painted onto their faces, necks, bellies, and backs. Cowan-Essig tells me she had participated in protests for a long time, but had always played it safe — that is, up until Trump was elected. It was then that she got the idea to organize a nude protest.

"I called my mom and asked her, 'What's the most shocking thing I can do without dying?'" says Willa Cowan-Essig, adding that she was raised by political activists. "The truth is that there are two things Americans can't look away from: nudity and violence. Black people and women are experiencing violence, and they're also shamed because of their bodies, whether it's our skin or our breasts. It's violence because of our physical form, not because of who we are."

At the Nov. 19 protest, I asked seven women what their wounds stand for, and why they're most concerned about those causes in light of Trump's impending presidency. Here is what they had to say.

"I chose the wound on the stomach to represent abortion and my body, my choice. I think it's disgusting how Trump wants to [fill] the Supreme Court with such conservative justices that they would want to turn over Roe v. Wade. I had an abortion at 21, and I couldn't imagine going through pregnancy or birth or even raising a child. I can't imagine my godchild or friends getting forced through that. It's our right. I think [Trump's] a sociopath and megalomaniac. I'm scared as a victim of sexual abuse. I see my abuser in him in every way, shape, and form. I'm terrified that our country will symbolically be abused by him."

"I really, strongly believe in women's rights. I really think that women should have the right to choose and they should have every right available that a man has. I think the way the election turned out, it's not fair for women, it's not equal, and it's going to be really harmful."

"I got choke marks on my neck to represent domestic abuse, but I also got 'my body, my choice' to represent that a woman should have the right to do whatever she wants with her body, whether that's to abort a baby or take birth control. F*ck Trump. He's not my president. I'm also personally not here to change the results of the elections. It's more to be around people that I feel supported and loved by, and know everything will be okay going into this election."

"I chose the [coat hanger] on my stomach because there's been a large fight for women's rights for long time. For me personally, I'm constantly at risk for being raped and for having Planned Parenthood clinics shut down. I have a blood disorder. Without my birth control, I die. There's so much stigma put on the female body. Having a female body means being constantly at risk."

"I'm kind of here celebrating several causes. After the election, it's not just been about one group. It's been about LGBT, women's rights, Black Lives Matter, immigrants. It's been everybody coming together. It's not about necessarily getting a new president, although I would love to see the Electoral College flip. It's about all the people [Trump] has attacked or said hurtful things toward. It's sad that Hillary had to tone down any 'first woman president' talk. The minute anyone said, 'It'd be historic' or you mentioned first woman president, people would say, 'Oh you're voting with your vagina.' To me, this is about keeping this idea going to that we're going to stand up for each other."

"It's been kind of depressing to see how much bigotry is still out there, and how it can play such a consequential role in the election. I think it's important now more than ever to make sure we don't quiet down because of it. Injury-wise, I went on more of a domestic violence route because it's something that I've experienced. I think physical injury can be really evocative for people who just up until now had only heard rhetoric... they just kind of expect folks to sit back and deal with the election. I want people to see the way that sexism in particular can affect people in a really visceral way."

"I got this [fake wound] right here on my stomach, mostly to represent that laws against abortion are very dangerous and can lead to women getting abortions in harmful ways. Also, this is where all your female organs are. For me as a woman, I feel wounded by the results of this [election] and by the prospects of some of my rights being taken away. [Trump] is really dangerous, not only in the policies that he proposes and people he appoints, but also the mindset he's spreading. Even if things he wants to do don't happen, it's still extremely dangerous to show people [that] oppression is suddenly okay."