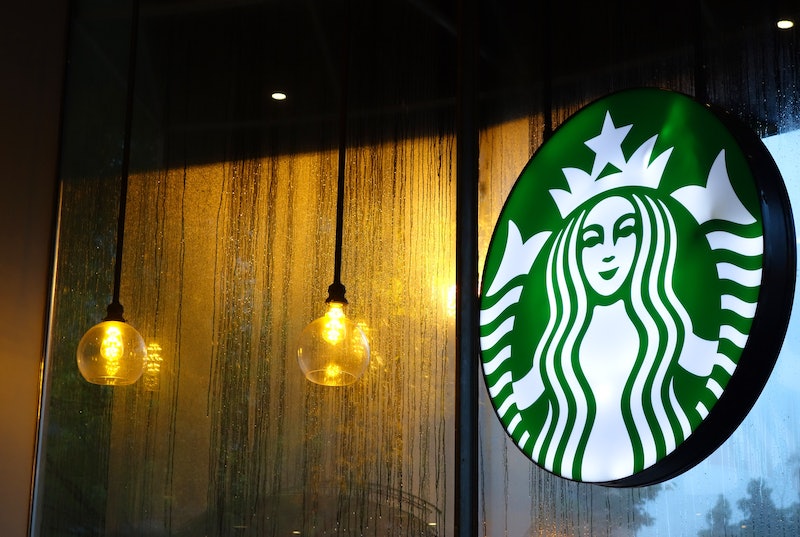 You may have seen news swirling around in the last week about Trump supporters protesting Starbucks. What is the Starbucks “Trump Cup” controversy? Spurred by a couple of ugly incidents with Trump supporters in Starbucks stores, some Trump supporters are now taking a stand against Starbucks… by buying the brand’s coffee. If this seems like a counterintuitive form of resistance, you’re not wrong.

The #TrumpCup campaign encourages Trump supporters to go to Starbucks and ask for "Trump" to be written on their cups. If a barista refuses... it's not clear what happens. To be clear, although it’s common for Starbucks baristas to write customers’ names on their cups and call out those names when drinks are ready, they are under no requirement to do so. “Over the years, writing customer names on cups and calling out their names has been a fun ritual in our stores — rarely has it been abused or taken advantage of,” a Starbucks spokesperson tells Bustle. “We hope and trust that our customers will continue to honor that tradition as we do not require our partners to write or call out names.”

As Refinery 29 reports, the Trump-Starbucks controversy seems to have sprung from two recent incidents caught on video involving Trump supporters and Starbucks. Last Wednesday, a 53-year-old man named David Sanguesa has an outburst in a Miami-area Starbucks. Video of the episode shows him yelling, “Trump!” and “I voted for Trump!,” and telling a female barista that she is “trash” and “garbage.” Sanguesa alleged that the barista had refused to serve him because he is white and voted for Trump. The barista, identified as Jennifer Santos, denies that she did any such thing. In an interview with the Miami Herald, Sanguesa said, “I had a bad day. I was wrong for screaming at her. I have since apologized.” In a later interview with the paper, he seemed to backtrack, saying that he wants to file a lawsuit for racial discrimination. “She wouldn’t serve me,” he said. “She knew I was a Trump supporter and wouldn’t give me my coffee.”

Also last week, a video hit the internet of a man attempting the get the name “Trump” written on his Starbucks cup. The barista refused, and threatened to call the cops. The man then asked for his money back.

Enter #TrumpCup. On November 17, Tim Treadstone, who goes by the moniker “Baked Alaska” on Twitter, called on followers to engage in “Operation #TrumpCup” by going to Starbucks, ordering drinks, and asking the name on the cup to be listed as “Trump.” If a barista refuses, Treadstone says, the customer should record the encounter.

As many people on Twitter have pointed out, the purpose of “Operation #TrumpCup” seems rather muddy. The campaign is not a boycott, and it seems rather ineffective as a protest of the brand, as the campaign encourages people to go to Starbucks and spend money.

Treadstone defended the campaign, telling Breitbart, “the media has twisted the narrative. Here’s the funny thing. This is a statement, not a protest.” He added, “It’s to let the world know that we are allowed to put our next president’s name on a Starbucks cup.” Um... ok?

Again, although it's common for Starbucks employees to write customers' names on cups, doing so is not compulsory. As a Starbucks spokesperson tells Bustle, "[W]e do not require our partners to write or call out names.”

Starbucks is no stranger to unnecessary, silly controversies. Remember last year, when some people accused the company’s minimalist holiday cups of not being Christmas-y enough? (Because, apparently, secular companies are required to include Christian imagery in their food packaging?) Guess which then-presidential hopeful weighed in on the issue? Yep, The Donald himself. Last year, Trump suggested at a rally, “Maybe we should boycott Starbucks” because their cups didn’t have enough Christmas in them. Proof that everything comes full circle! Or something. Actually, I’m not sure what it “means” that Starbucks has somehow become a nexus for social and political commentary, except, perhaps, that people take their morning hazelnut lattes very seriously. In this time of great division, can’t we just let everyone drink their sugary, seasonal coffee beverages in peace?