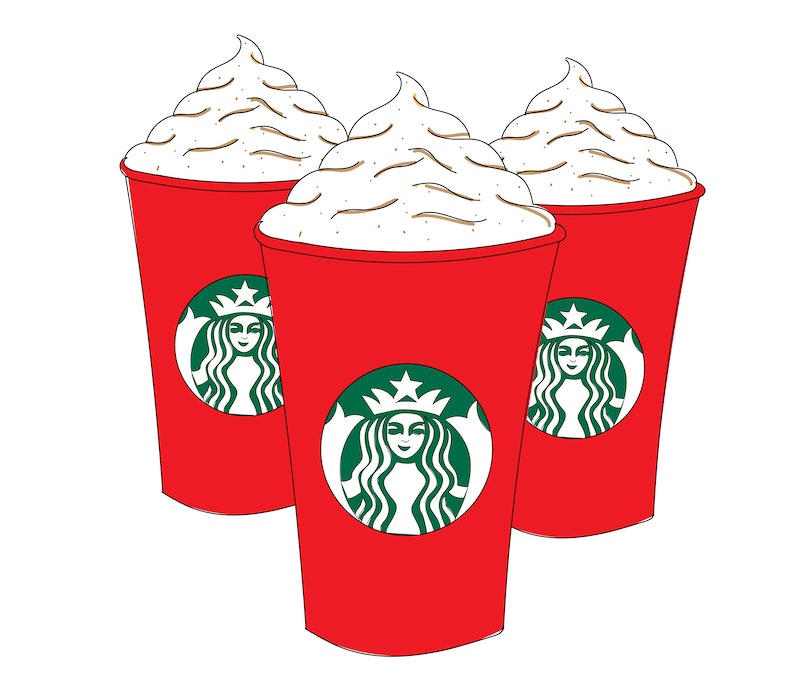 When Starbucks introduced its new seasonal holiday cups at the beginning of November, I doubt that anyone anticipated that the cups — a minimalist red color with a subtle ombre effect — would become a source of national controversy. But when a video by evangelist Internet personality Joshua Feuerstein, complaining that Starbucks had “REMOVED CHRISTMAS from their cups” (a sign, he says, that “they hate Jesus”), went viral to the tune of 14 million views and counting, that’s exactly what happened. Now a variety of major media outlets have covered the story, people are talking about it all over Twitter, and even Donald Trump has chimed in to suggest a boycott of the coffee company (because of course). Amid all the chatter, I have one question: Can’t we find something better to talk about?

It's tempting to talk about this "controversy" at length, if only because it is so clearly ludicrous. In many ways, the outrage against the cups doesn't even make sense. After all, they're still red and green — and therefore still clearly aligned with Christmas — and they’ve never featured explicitly Christian images in previous years, either, so it's not clear where all of the anger is coming from now. Regardless, Starbucks, a secular company, has every right to do whatever it wants with its packaging, and that includes not putting religious iconography on its cups. And there’s a certain irony in the fact that people are arguing that the absence of secular holiday symbols like tree ornaments, snowflakes, and reindeer from these cups is an affront to a religious holiday — because the last time I checked, Rudolph the Red Nosed Reindeer wasn’t a major player in the Bible.

In a comment to Bustle's sister site Romper, a Starbucks representative explained that the red cup was intended as a "blank canvas" that customers can decorate as they choose. The spokesperson continued, "Our core values as a company are to create a culture of belonging, inclusion, and diversity. Each year during the holidays we aim to bring our customers an experience that inspires the spirit of the season and we will continue to embrace and welcome customers from all backgrounds and religions in our stores around the world."

The debate about the true significance of a plain red cup may rage on, but at the end of the day, IT’S JUST A CUP. There are so many other things that we could be talking about instead — imperative things and trivial things, serious things and silly things — and they would all be better topics of conversation than the supposed religious persecution practiced by a secular company in choosing to go minimal with its holiday cup design. Here are just a few topics — from the important to the inconsequential ­— that we could be chatting about instead of red cups:

Religious persecution really happens. This outrage over a coffee cup trivializes the religious discrimination, intolerance, and even violence that people around the world face every day.

2. Complex questions about religion in the public sphere.

As Emma Green points out in The Atlantic, the United States has recently been dealing with a lot of complicated questions about the role of religion in public life, the work place, and education; about the meaning of “religious freedom”; and about the relationship between religious liberty and other civil rights. These questions pose real challenges that should be discussed thoroughly and publicly; as Green suggests, Feuerstein’s “coffee cup outrage” is nothing more than “a silly social-media campaign.”

The wage gap is real, y’all, and it is a lot more complex than the famous “women earn 77 cents to a man’s dollar” statistic would suggest. A recent report by PayScale found that the wage gap varies according to industry and location, and is deeply affected by demographic factors like race and family situation. The issue is not only that women are paid less than men, but that, for many reasons, women are excluded from many high-earning careers, like those in STEM fields, from the outset.

Last week protesters free-bled outside of the U.K. Parliament to protest the nation’s tax on menstrual supplies. According to the U.K. tax code, tampons and pads are designated and taxed as nonessential luxury items, while items like edible cake decorations are not; a parliamentary vote in late October decided against lifting the tax. Now that’s something to get pissed about.

5. The approximately 100 Republican presidential candidates who are still vying for the nomination.

Tonight we’re gearing up for Republican debate Number Four, with eight candidates on the prime time stage, and frankly I’ve lost track of what’s going on. Instead of talking about coffee cups, let’s try to sort out who’s doing what, and lay bets on which candidate will give the most inflammatory sound bite of the night (will it be Donald Trump or Ben Carson? Or an unexpected outlier?).

6. The hero dogs that saved all those tiny penguins.

According to a recent New York Times story, in the late 1990s and early 2000s, the population of little penguins (the world’s smallest penguin species) on an island off of southern Australia was almost decimated when non-native foxes were introduced. A local farmer named “Swampy Marsh” (I am not making this up) stepped in by training Maremma sheepdogs to protect the birds. The dogs saved the penguins, whose numbers had dwindled to only six. Now there are hundreds of birds back on the island.

Isn’t that the best story? Discuss.

7. How to contribute something impressive to Thanksgiving dinner without having to do any work.

The holy grail of Thanksgiving dishes is the one that looks amazing but that isn’t hard to make. With Thanksgiving just around the corner, there’s no time to discuss whether Starbucks’ holiday cups are Christmas-y enough — we need lock down our Turkey Day battle plans.

A couple of days ago we got a new trailer for Star Wars: The Force Awakens, in which Lupita Nyong’o says in voiceover, “I have lived long enough to see the same eyes in different people. I see your eyes. I know your eyes.” The clip has fans speculating that she may be referencing a connection between characters, but who? Does this mean that Rey is Han’s daughter? Or Luke’s? Or is she not talking about Rey at all? GUYS, WE NEED TO KNOW.

9. How to make a peppermint mocha at home.

If all this talk about Starbucks’ holiday cups is filling you less with outrage than with a craving for the brand’s famous holiday drinks, get yourself some of their peppermint mocha mix and make it at home. Then you can put it in whatever damn cup you want!