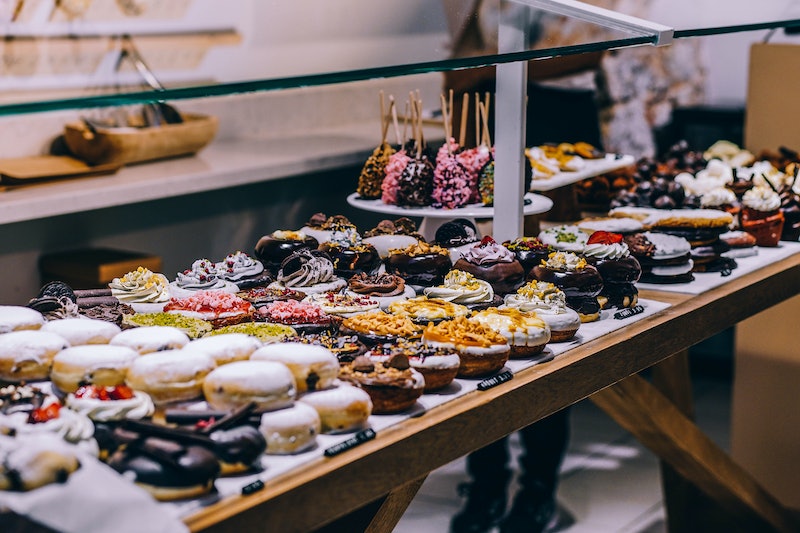 Planning a wedding is insanely stressful, as anyone who’s ever planned one well knows. The last thing a bride needs is rudeness from a vendor — but that’s exactly what Amanda De Pascale reportedly got from an NYC dessert truck. Allegedly, the Long Island bride received a horrible note from the bakery on November 8, after she had passed on the business’ services. Bustle attempted to reach out to Amanda De Pascale for comment; however, her Facebook page has been made private. Bustle has reached out to Sweetery NYC, and they said they have no further comment on the matter at this time.

De Pascale and her fiancé, Joe Rea, are planning a wedding for February. As reported by Long Island News 12, a few weeks ago, De Pascale got a quote for services from Sweetery NYC, a dessert food truck. The estimate was out of her budget, so she decided not to hire the company. For two weeks, she claims, Sweetery NYC attempted to contact her again and again. “They kept calling me, multiple times an hour, then would stop for a few hours, then call back again,” De Pascale told Fox News. “I told them, ‘I can’t talk right now, I’m at work,’ and hung up.”

She admitted to Long Island News 12 that she didn’t respond to the company. “I probably should have, but I never did,” she said. Regardless of whether De Pascale should have responded to Sweetery NYC, what allegedly happened next is inexcusable: According to De Pascale, she received an email from the account of Grant DiMille, a cofounder and owner of Sweetery NYC (it turns out the e-mail was not from DiMille, but more on that in a minute). In the email, the sender allegedly calls De Pascale a “despicable bottom feeding wretched disgrace of a person” and “an absolute low life twisted miserable individual.” The sender wrote, “We truly hope that your wedding bombs” and tells De Pascale, “We could not even imagine the person that would marry you.”

Here’s the full text [sic throughout] from screenshots that were shared on De Pascale's Facebook account before it was made private in the days following the incident:

We have zero idea what type of warped sick games you are playing with us, but now it is time for us to have a say.

You are a despicable bottom feeding wretched disgrace of a person, who is as disgusting as they come.

How many times have we called you to follow up on the proposal that we expanded time and effort to produce based on your request and each and every time you cowardly hang up the phone on us when we identify who is calling, what an absolute low life twisted miserable individual you have to be.

We also send you multiple emails that you don't have the decency to respond to, who do you think you are, because we are here to tell you that you are a weak, meager spineless empty sack low life piece of trash.

We work very hard to do right by client both existing and perspective and although rarely do we come across a pile of dog sh*t like you, it is cowards like you that are not worth the gas that we pass. If you were not interested in our services that open your mousy measly trap and say so, but no not you, you would prefer to hang up on us countless time pretending that you cannot hear us to which we would normally say get a new phone but it is clear that you should get a life.

You are despicable and that is probably on your best day, on your worst day you are a complete waste of humanity, I know dogs when they lift their legs that have better manners than you do.

What kind of trash would ask a company to do work for them and then not have the decency and respect, or the respect for their own self, not to at the very least say thank you, or no thank you... That kind of a person is a sad, sorry douchebag in anyone's vocabulary.

We truly hope that your wedding bombs and turns out to be a complete and total disaster of the century why would it be anything but since you are a part of it. We could not even imagine the person that would marry you, pity the poor lonely soul whose life is doomed before it starts with you, we hope that he or she runs and saves them self from the mud hole that you are.

If for some reason you need further clarification on our thoughts let us know we are certain we can clarify those thoughts for you.

Owner Grant DiMille confirmed to Fox News that the email came from Sweetery NYC. “Yes, it came from a company computer, but it was not sent by myself or any member of management,” he said, adding, “It’s a terrible offense, yes, but everyone makes mistakes.” DiMille told Fox News that Sweetery NYC had “penciled in the date” for De Pascale’s wedding, and needed to know whether she wanted their services because they had another client asking for services on the same date. He conceded that no money had changed hands between the company and De Pascale, but commented, “I think clients bear some responsibility to be good clients. From my understanding, that did not happen in this situation and it’s unfortunate that it escalated to this level.”

He later told Fox News that the employee who wrote the email has been fired. Last week, he sent an apology to De Pascale, and, according to Fox, posted a public apology on the bakery’s Facebook page. (The apology is no longer available.) As stated previously in the article, Sweetery NYC told Bustle that they have no further comments on the matter.