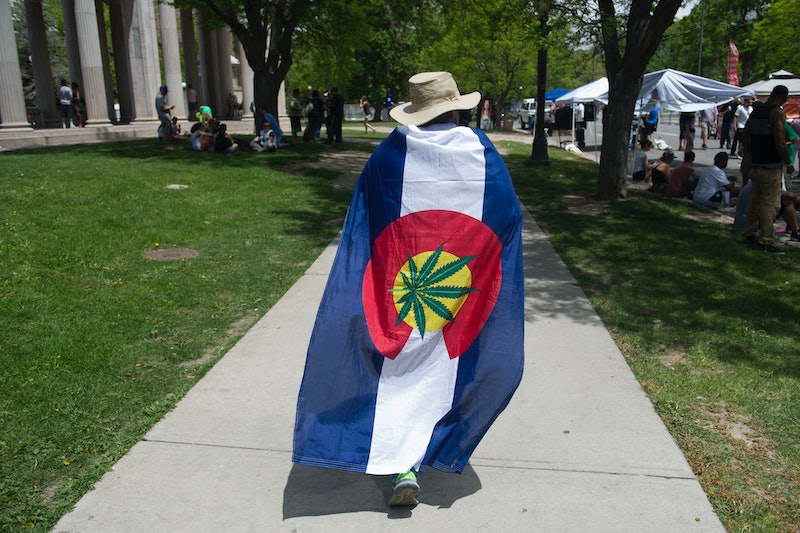 On November 8, Denver voters passed Initiative 300, a four-year pilot program that will allow businesses to seek permits for customers to bring and consume marijuana on their premises. That means that, if you’re in Denver, “Bring Your Own Pot” restaurants may be just around the corner — well, maybe. New restrictions on the law will limit where Denverites are able to consume weed, but, on the whole, they’re about to have a lot more options when it comes to getting high in public.

Colorado has allowed legal recreational marijuana since 2014, but, as The Denver Post points out, many people in Colorado end up consuming the substance illegally, even if they purchase it legally. That’s because there are restrictions about where it’s legal to consume pot — for the most part, you can only consume marijuana on private property, with the permission of the homeowner. That creates a problem for people who have landlords or HOAs that don’t allow pot use, as well as tourists staying in hotels or other places with rules against marijuana. These people can legally buy marijuana at licensed dispensaries (where it is illegal to consume one’s purchase), but they’ll often end up breaking the law anyway, by consuming it in public or in private places where they don’t have permission.

Initiative 300 is intended to fix that problem, by allowing businesses to apply for permits that would allow customers to bring and consume there own pot. Indoor permits would allow for vaping and edibles, while outdoor ones would also permit smoking. The measure comes with the caveat that applying businesses must be sponsored by a local neighborhood or business organization (the reasoning being that these groups would be able to make stipulations about pot use in their area in exchange for their backing).

On Election Day, Initiative 300 passed, with 53.5 percent of Denver voters casting their ballots for the measure. Last Friday, however, Colorado state licensing officials threw a major wrench into the proceedings. From January 1 onward, it will be illegal for businesses with liquor licenses to also allow the consumption of marijuana on their premises. That means that bars and most restaurants will be automatically disqualified from Initiaive 300 and will not be allowed to apply for “Bring Your Own Pot” permits.

Supporters of the new rule included the Colorado Restaurant Association (CRA) and Mothers Against Drunk Driving. In a press statement, the CRA stated, “The CRA, along with many other stakeholders, expressed concerns about the public dual consumption of marijuana and alcohol.” In the statement, the CRA cites concerns that allowing marijuana use will increase liability for restaurants and bars, that insurance companies will be reluctant to cover places that allow both alcohol and marijuana consumption, and that customers could become confused if some restaurants and bars allow pot and others don’t.

Marijuana legalization activist Mason Tvert told The Denver Post that the liquor restriction will ultimately be harmful. “This will not prevent adults from using marijuana and alcohol at the same time,” he said, “But it will ensure that the marijuana gets used out in the alley or on the street rather than inside of a private establishment.” However, although Tvert calls the new restriction “absurd,” he points out that it “doesn’t completely hinder the entire law [Initiative 300].” Businesses that don’t serve alcohol, from coffee shops to yoga studios, will still be eligible to apply for permits.