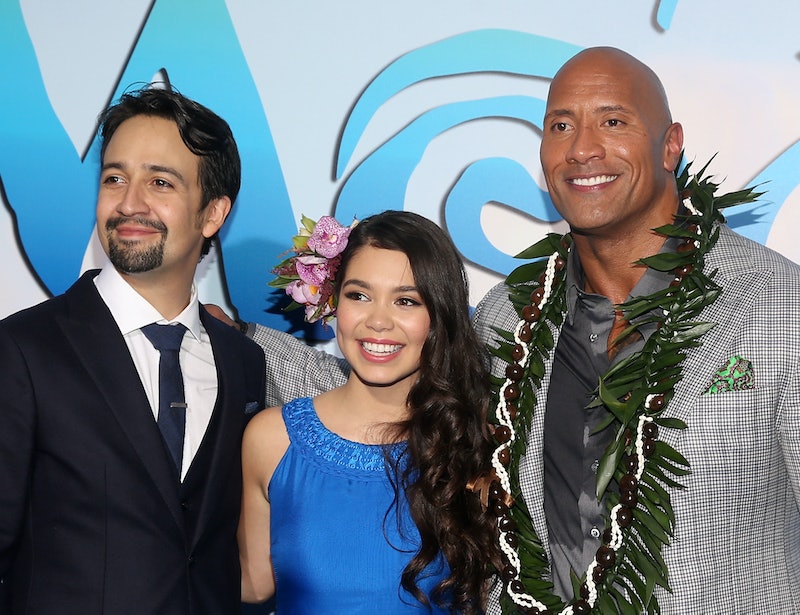 Moana, Disney's new animated feature, is about a teenage, Polynesian girl named Moana, who goes on a journey with demigod Maui across the ocean. The movie features music from Hamilton superstar Lin-Manuel Miranda and will be Dwayne "The Rock" Johnson's musical debut, and a lot has been made about their involvement in the film. But what about the voice actor who plays Moana herself? Instead of looking for another established star to play the newest Disney heroine, the studio went another route, choosing a complete unknown to voice the next Disney Princess, and to say it worked well is an understatement.

Auli'i Cravalho didn't originally audition for Moana. A 16-year-old girl living in Hawai'i, Cravalho, who is native Hawaiian and of Polynesian descent, thought she was busy enough with school and extra-curriculars. "A few of my friends actually flew out to Disneyland to try out... I was getting through my freshman year, I was settling in really well and I had things on my plate," she told People on why she didn't initially audition for the role. Instead, she submitted an audition tape with some friends for a charity performance. But, in a strange twist of events, her audition tape ended up in the hands of Disney, and the rest is history. "Auli'i was the very last girl that I saw on my last day of casting," said casting director Rachel Sutton in a featurette video announcing the casting.

Cravalho's casting is pretty extraordinary. Moana is her very first role — "Unless you count backyard plays and things I put on for my mom in my living room," she said in an interview with Refinery 29. But that's not the only reason her casting is remarkable. In a world of animated movies like Kubo and the Two Strings, which hired white actors to play Japanese characters, Cravalho is, unfortunately, somewhat of a rarity in that she actually shares her character's ethnic heritage. "The fact that Disney has shown some wonderful lights on the Polynesian culture... it's wonderful to see our culture really highlighted in that way. It's an honor," Cravalho told Refinery 29.

For the most part, Cravalho, who told Seventeen that her favorite Disney Princess prior to Moana was Mulan, is a regular teenager, just with more fans. This includes her famous co-stars, Johnson and Miranda, who have both been singing her praises in the press leading up to Moana's release. "We saw countless, countless auditions and then Auli'i came along and my gosh, she's like a real-life Moana — fore real, except she's not animated," Miranda recounted in an interview with the NY Daily News . "And then the other really exciting thing that happened is when she got to the studio, she can really sing." Meanwhile, Johnson has been posting photos of his new co-star on Instagram, calling her "poised, humble, strong, determined, and happy."

Cravalho appears to be taking everything in stride, and she's embraced the fact that, no matter where she goes from here, she'll always be associated with Moana. "No one calls me Auli'i anymore; my name is Moana," she told the NY Daily News . "My friends call me Moana. My teachers call me Moana. It's widely accepted."

So far, Cravalho doesn't have any other projects in the works, but I'm willing to bet that you'll be seeing a lot more of her in the future. Speaking with Bustle, Cravalho said she hoped to pursue a music career, saying, "I've always felt really deeply connected to music... I think music can take you on such an emotional journey." Something tells me Cravalho won't be just known as Moana for long.