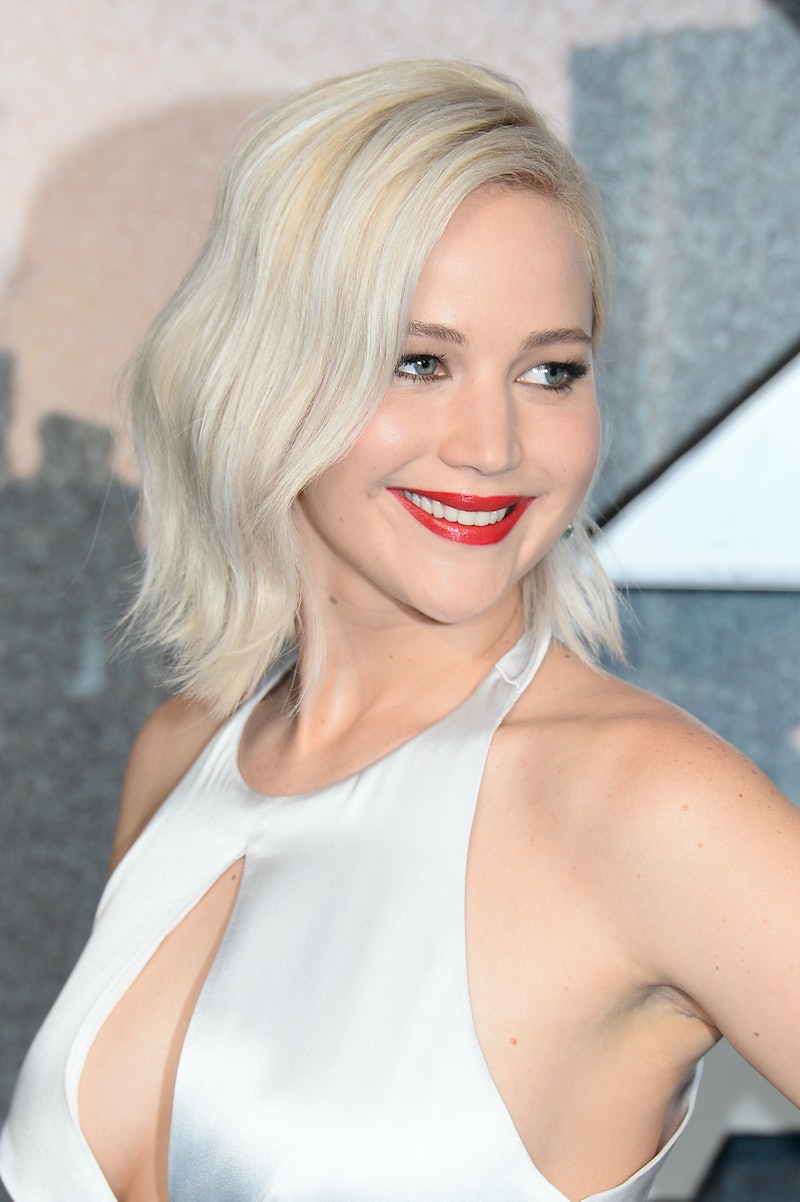 J. Law's celebrity friend list never ceases to amaze me — and also make me super envious. From Amy Schumer to Adele to Aziz Ansari to Liam Hemsworth to Bradley Cooper to Josh Hutcherson, the Passengers star continues to impress with her extremely famous besties. Well, in an interview with Vanity Fair as the cover star for its 2016/2017 holiday edition, the 26-year-old dished about one of her closest friends — Emma Stone. Did you know that Jennifer Lawrence and Emma Stone's friendship is straight out of The Notebook? For real. That's how Lawrence herself describes it, so just think of them as real-life versions of Allie Hamilton and Noah Calhoun.

They may not be head over heels in love with one another exactly like Allie and Noah, but they do have a very unique kind of love for each other. Plus, Lawrence and Stone are as thick as thieves, can't help but praise each other's personalities and talents, and realize just how special they are as both individuals and as a duo. That sure sounds like the two characters Ryan Gosling and Rachel McAdams brought to life in the 2004 film.

If you don't believe me that they have a Notebook-like friendship, then here's all of the proof you need straight from Lawrence's interview with Vanity Fair.

They Met Through A Friend

Like Noah's close friend Finn introduced him to Allie, Lawrence and Stone met thanks to Woody Harrelson. "She texted me that she got my number from Woody," Lawrence revealed. "I replied, 'F*ck off!' And we’ve been really good friends ever since."

They Wrote Each Other Every Day For A Year

This isn't even a joke, they seriously wrote each other every day for an entire year. Lawrence dished, "I feel like it was our version of The Notebook — 365 texts."

"If I wasn’t her biggest fan, I would’ve Tonya Harding’d her in the kneecaps," Lawrence said of attending a screening for La La Land, Stone's film with Gosling. Obviously, she is totally joking, but this is pretty much their version of an Allie and Noah fight.

As much as they love each other, sometimes Stone gets jealous. I mean, it's Jennifer Lawrence, who wouldn't? In an email written to Vanity Fair, Stone divulged, "She may not even know this, but there was definitely a time early on when I was like, 'OH HEY MY EGO IS GOING NUTS SHE’S SO GREAT AND VIBRANT AND TALENTED I’M SCREWED I’LL NEVER WORK AGAIN GOODBYE YELLOW BRICK ROAD.' Then I chilled the f*ck out — and remembered we’re completely different and there is room for everyone, even if it’s an industry that doesn’t really seem to support that idea up front."

But They Always Have An Epic Reunion

No worries, though, because when they do fight, they reunite in epic proportions. "We both really do love each other and care about each other as people, beyond being actors," Stone gushed. "I support her completely when it comes to work and I feel the same from her, but I know we’d be friends even if we didn’t do the same job."

They're All About Uplifting Each Other

They support one another 100 percent and can't help but praise each other in the process. "I love my job." The Oscar-winner continued, "I don’t know what I would be without acting. So if there is someone who loves the same thing, it should bring us closer. But it depends on how that person is, and Emma is so normal and lovely."

They Really Do Love Each Other — A Lot

Stone feels exactly like Lawrence, as she told Vanity Fair, "She has unbelievable clarity. She can witness a situation or meet a person and see through the entire thing almost instantly. It’s stunning."

And if you didn't already adore these two, how can you not love them for being just like Allie and Noah?